James Ruse Agricultural High School has led the state in the Higher School Certificate for the 26th year despite the disruption caused by COVID-19, with North Sydney Boys and Baulkham Hills High rounding out the top three.

Sydney Grammar was the strongest-performing private school in 2021 at fourth, and Reddam House in Bondi, which was sixth, was the only school in the top 10 that does not require students to sit an entrance exam.

St Clare’s College in Waverley, which has also been recognised as a high-growth NAPLAN school, was the top-performing Catholic school at 29th, while Willoughby Girls High (65th) had the best results of all the non-selective public schools.

In the most disrupted HSC since the exams began, schools in areas hardest hit by last year’s lockdown still did well; Meriden School in Strathfield lifted five places to 12th, and selective Girraween High climbed eight spots to 19th.

Public and Catholic schools in the hard-hit council areas also had strong results; Bethany College and Marist College Kogarah, both in the Bayside LGA, and Clancy Catholic College in Liverpool all had their best results in five years (63rd, 76th and 81st).

Prairiewood High, a comprehensive public school in the Fairfield area, jumped more than 100 places to 80th. Its students achieved 154 band 6 results in subjects ranging from English advanced to mathematics extension 2 to visual arts, which was almost double the number of band 6s its students received in 2019.

Canley Vale High in Fairfield had its best results in five years, jumping more than 100 places to 137th, as did Cumberland High in Parramatta (110th), the partially selective Blacktown Boys High (111th) and Bonnyrigg High in Fairfield (150th).

Last year was an unusual one for the HSC. The exams were held four weeks later than usual, and normal lessons were replaced with remote learning for more than a term for schools across Sydney.

Many students did not have the technological resources they needed and, in the LGAs of concern, some could not access the school site to work on major projects or pick up important equipment.

The disruption, particularly in LGAs of concern, also led to much more widespread use of special consideration provisions for disrupted schools. They allowed students whose exam marks were significantly lower than expected to have their HSC mark based on their school assessments instead.

The NSW Education Standards Authority will not release data on special consideration applications until later this year.

Of the top 150 schools, 29 were government selective, 16 were comprehensive state schools, 27 were Catholic systemic schools, and the rest were independent. It was the best year for the Catholic and public selective systems since 2016.

Consistent improvers over the past five years include Al Noori Muslim School, which has climbed from 100th in 2016 to 32nd, and partially selective Sefton and Chatswood High schools, which, at 47th and 60th, had their best results in five years.

Ravenswood was 20th, its best result in several years.

James Ruse has finished first in the HSC rankings since 1996, when it took the crown from Sydney Grammar. It was originally established as a farming school, and agriculture is still a compulsory subject until year 10. It improved its success rate from 68.47 per cent last year to 70.58pc in 2021. 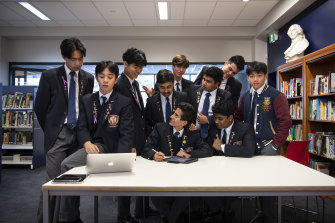 To calculate school and subject rankings the Herald uses Band 6 and E4 (the top result for extension subjects) data from the NSW Education Standards Authority (NESA) which reflects marks of between 90 and 100 or 45 and 50.

However, band 6s and E4s in different subjects are not of equal difficulty.

Each band represents what a student knows, understands and can do within each discipline. The average performance in most courses is usually a mark in the mid-70s or a Band 4. NESA only provides band 6 and E4 HSC data.

The Herald calculates its rankings by using success rates, which are the ratio of band 6 or E4 results at a school compared to the number of students that sat exams. The Herald ranks only NSW schools where at least 150 HSC subject results have been registered.

The data is not adjusted for socio-economic advantage, so most of the schools in the top 150 teach students in the higher quartiles of advantage. The Herald will analyse the data to take socio-educational advantage into account and publish the results in coming days.