London: Humans often do it when they’re tired or bored, and would rather go back to bed.

However, yawning is used by wild lions to tell each other it’s time to get moving, a study has found.

The research, published in the journal Animal Behaviour, reveals that a pride regards a yawn as a signal to stop lying around and start hunting. 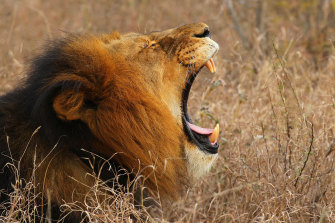 Scientists found that when one member of the pride yawns, those nearby start copying – setting off a spell of contagious yawning which spreads the message across the group.

Dr Elisabetta Palagi, from the University of Pisa in Italy, who led the study, said: “Lions are very social animals and they are highly advantaged by acting together in synchrony. They hunt co-operatively, they rear offspring collectively and defend their resources from competitors by joining the forces.

“So, having signals that help optimise communication to act together can be highly beneficial for this kind of animal.”

A pride of 19 lions living in two social groups at a research camp in Limpopo province, South Africa, were analysed for four months by the scientists.

Nearly five hours of video, covering the day and night, was recorded of each lion.

They were found to engage in contagious yawning, doing it within three minutes of each other.

Then, as if performing a Mexican wave, the lions got up one by one and followed each other away from where they had been resting.

It may seem intuitive that the pride’s most dominant member would be best placed to initiate a contagious yawn, leading to action among all members.

However, the scientists found this was not necessarily the case.

“The trigger could be a male or a female, an adult or a youngster – so we really do not think that dominance is important in this case,” said Palagi.

Yawning was also not found to be a trigger for aggressive behaviour. Lions did not exhibit the contagious yawn when they were competing for their next meal – usually a carcass.

Palagi said there was not much variation in the yawns, and the lions seemed to perform them in the same manner and for the same duration in the footage.

The next step, she said, is to categorise the yawns exhibited by lions to see if there are subtle differences between them, potentially indicating different kinds of actions are being initiated.

The study concludes: “Our findings suggest that the convergence of motor behaviour triggered by yawn contagion (to our knowledge never explored in any other species) could represent an important tool to shed light on the adaptive and immediate benefits that underlie the evolution of the yawn contagion phenomenon in human and nonhuman animals.”

Lions are not the only animals who yawn to convey a message to their fellow beasts.

Baboons, guinea pigs and Siamese fighting fish yawn to show aggression; penguins yawn during courtship rituals; snakes yawn after a good meal; long-tailed macaques do it to end a conflict over food and dogs often copy the yawns of their masters to show empathy.