Now 4,500 pigs face cull within days: Thousands are set to be killed

Now 4,500 pigs face cull within days: Bloodbath on nation’s farms as thousands of swine are set to be killed and disposed of as staff shortage hits processing plants

Thousands of pigs are set to be culled and thrown away within days in a bloodbath on the nation’s farms.

As many as 4,500 of them are due to be shot with bolt guns or given lethal injections this week, according to the president of the National Farmers’ Union (NFU).

A shortage of expert butchers and abattoir workers means the nation’s processing plants are refusing to accept pigs that should be going into the food chain.

Some 600 pigs were culled on farms last week, however this is now being dramatically stepped up with tens of thousands set to be slaughtered and incinerated. Industry experts suggest the total number could reach 120,000. 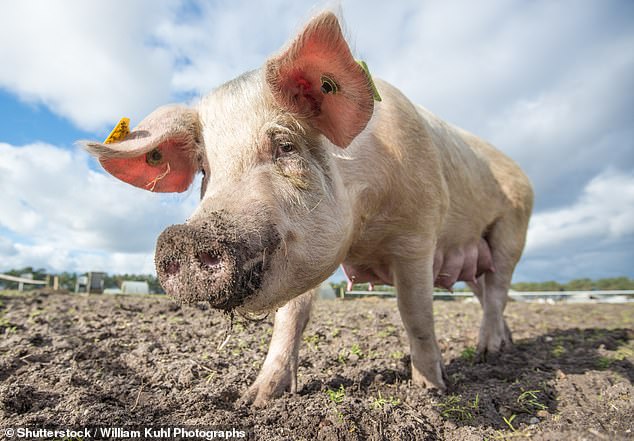 As many as 4,500 of them are due to be shot with bolt guns or given lethal injections this week, according to the president of the National Farmers’ Union

One industry source said there are three farms, each with 1,500 pigs, where the animals are due to be culled and thrown away this week. It is thought that at least one of these is in East Anglia.

Farmers and vets are furious at government inaction on the issue and are angered by comments from Boris Johnson who has made light of the mass slaughter.

The NFU president Minette Batters said: ‘This is not shroud waving. This is a very, very challenging situation for pig farmers. We are potentially looking at the end of the size of the pig farming structure we have in this country unless we sort it.’

The Prime Minister has joked about the issue in a series of interviews. He suggested that as pigs would normally be slaughtered for food, the cull is not a serious concern.

Farmers argue that killing pigs and throwing them into a skip rather than seeing them go into the food chain is a scandal, not least in terms of food waste and a rising use of food banks. Vet Duncan Berkshire, who is involved in planning any cull, said the remarks were ‘enormously disappointing’.

He is liaising with the Department for Environment and Rural Affairs to tackle overcrowding concerns as adult pigs are not being slaughtered fast enough. He said: ‘Unfortunately, those discussions are around the horrific case where we are looking at not only when but also how we will have to enact a cull of healthy animals which would then just go for incineration.’

He added the numbers of pigs that have already been culled ‘are unfortunately starting to rack up’.