NSW reported 12,226 new cases of COVID-19 on Thursday and one death, as premiers and territory leaders meet with the Prime Minister to discuss redefining close contacts and seek clarity on the use of rapid antigen tests.

There are 746 coronavirus patients in hospital, up 121 on Wednesday, and 63 people are in ICU. 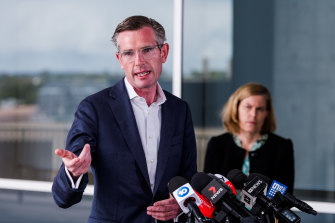 NSW Chief Health Officer Kerry Chant on Wednesday said one in 10 people could be infected in the “first wave” of widespread community transmission of the Omicron variant.

NSW Premier Dominic Perrottet said he was eager to discuss changes relating to close contact definitions and isolation periods at Thursday’s national cabinet meeting, to be held at noon AEDT, and welcomed a “national approach”.

“It’s important that we continue to adjust and get as consistent approach as we possibly can across all the states and territories,” he said.

Mr Morrison said the aim of Thursday’s meeting was to redefine close contacts and to discuss the long testing queues experienced in numerous states, including “which test [to use] in what circumstances, and how they’re provided to manage a large volume of cases”.

He said the proposed definition, to be presented at national cabinet, would be that a “genuine” close contact is only a household or household-like contact of a confirmed case of COVID-19 who has spent more than four hours with the person in a house, accommodation or care facility setting.

“The uncertainty of that, the impacts on the economy and particularly given the fact that we are not seeing the impact on the hospital system means that it’s an impractical way to live with the virus in this next phase.”

Epidemiologist and World Health Organisation adviser Professor Mary-Louise McLaws told Nine’s Today show on Thursday she felt the proposal was “unscientific” and that four hours was “far too long”.

“We’ll have many more cases out there than we know,” she said. “It really does undermine a lot of impact on public health measures if it’s just left four hours.”

She said Australians should be given rapid antigen tests to check themselves at home after being in a household with a case or following an event, as is the process in the UK.

The NSW government has this month ordered a total of 50 million rapid antigen tests to be distributed for at-home use early next year.

Deakin University epidemiologist Catherine Bennett told 2GB radio the test and isolation approach needed to be sustainable and “should evolve as you change what you’re trying to achieve”.

“We will miss people who have been exposed to a case and might acquire an infection, and they might get symptoms and get tested and be picked up, but they might not,” she said on Thursday.

“We know that there’s that risk, but the risk drops away as you move away from households and those immediate four-hour or more contacts. That’s where your highest risk is.

“Concentrating on that … reduces transmission but doesn’t stop it. It slows it down and that’s what we want.”