Follow
Home » World News » Octopuses, artworks and dinosaurs on the moon: Children’s tiny galleries pop up in the streets

A red octopus hangs above a sign that reads “Please do not touch” as a small crowd peruses seascapes of sailing ships and ocean liners on the walls.

As Melbourne’s lockdown drags on, tiny galleries are popping up in Brunswick streets. Their pre- and primary-school aged curators, stuck at home, are composing scenes for passers-by to enjoy. 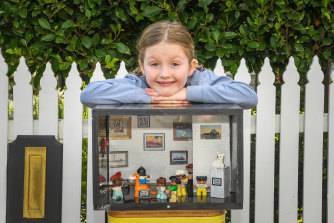 About the size of a shoebox, the seascape museum is inspired by the National Gallery of Victoria, a place designer Scarlett Martin likes to visit when restrictions allow.

“Since it’s lockdown, so we can’t really go sailing, I thought it might be nice to do a picture of it on the walls of the art gallery,” says the six-year-old.

Tiny “Do not touch” signs make the display look more like a real art gallery, Scarlett says. And the octopus? “That was just something I thought people might enjoy.”

The Neighbourhood Museum is an idea conceived by Brunswick local Georgie Greer to keep children creative, curious, active and connected during lockdowns. 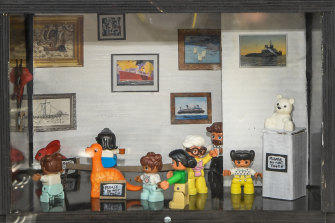 As Scarlett says: “If you have a really good idea, it’s nice to see your idea and think about things that you love.”

In Elvie and Marlon McNicholas’ museum, unicorns, snakes and dinosaurs are playing hide-and-seek on the moon.

A few streets away, another diorama houses colourful origami animals against a rainbow backdrop. This is the work of five-year-old Daria Coleman.

“The baby animals are the ones that don’t have bodies and the grown-up ones have bodies,” she says. 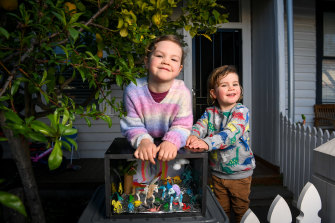 “Last year there were rainbows everywhere and teddy bears in every window. There’s not that many of them left out there anymore.”

The Neighbourhood Museum was a “great way of carrying on when we’re all a bit fatigued”, she says.

Project instigator Georgie Greer finished working at the Arts Centre in June. She came up with the idea while at home with her own children, using her skills as a curator to “keep them engaged and busy and creative”. 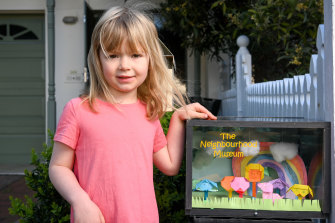 She tested the idea among families at their childcare centre to gauge interest. On day one, 10 families put their hands up. Now, about 20 households are participating.

Ms Greer has set up an Instagram feed for the Neighbourhood Museum project, but she said her real motivation was to encourage children to be outside and feel part of their community.

She hopes the idea catches on.

“I really just wanted to plant the seed … What would be lovely is, if people took the idea and created their own. They could create their own museum boxes and pop their displays out,” she says.

Bernie Casey from Complete Displays in Brunswick has been making weather-proof boxes for the initial participants. His business usually works on major events like the Grand Prix and has been “smashed” by the pandemic.

Mr Casey said he was delighted to be involved.

“The kids feel good about themselves, I’m very happy about that … I think it’s one of those good stories that you don’t hear often enough in this time.”