Older fathers’ sperm could raise risk of schizophrenia in offspring

Scientists believe they’ve identified a genetic component to a person’s overall risk of developing schizophrenia, but say the condition is even more complex than initially thought.

The Queensland Brain Institute, part of the University of Queensland, is conducting a range of research projects looking at the debilitating mental condition. 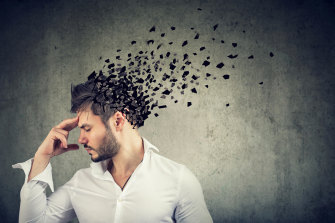 UQ researchers are investigating how genetics and environmental factors weave a complex web of risk for developing schizophrenia.Credit:

Associate Professor Tom Burne heads one of the teams looking specifically at the underlying biological basis for schizophrenia.

He said his work in animal models had enabled them to build a clearer picture of what caused schizophrenia, but every solution brings new mysteries.

“We thought early on it would be a genetic disorder and there would be a simple genetic cause, but it turns out there are hundreds of genes, all with a small effect,” Burne said.

“We’ve been looking at these modifiable environmental risk factors, which could allow us to create guidelines for the overall risk of developing schizophrenia.”

So far, the research team has uncovered a handful of non-DNA-based risk factors, including the age of your father.

“Having an older father increases your risk of developing schizophrenia, which we think is linked to ‘de novo’ changes in a man’s sperm, which then lead to changes in brain development in their offspring,” he said.

“So there might be a recommendation that you could screen older men’s sperm [or] you could reduce the age men have children.

“Importantly, it will only reduce the overall risk by a small amount because we just don’t know the causes of schizophrenia yet.”

Schizophrenia is in the spotlight this week, with an annual awareness drive organised by the Mental Illness Fellowship of Australia (MIFA) to highlight the condition.

Affecting 1 per cent of Australians, the disease’s symptoms can include hallucinations, delusions and thought disorders.

It’s estimated to cost the Australian economy $2.6 billion annually in direct health costs, as well as a loss of productivity.

MIFA’s chief executive, Tony Stevenson, said there was still not enough support for those living with the condition.

“Sadly, there is still way too much stigma and discrimination for people who have a severe mental health condition. This massive gap needs fixing.”

Burne said he hoped his work could eventually identify viable treatments – both for environmental risk factors and drug interventions – which have stagnated over the past half-century.

“For schizophrenia, antipsychotics deal fairly well with psychosis, but the side effects are pretty bad, and most of the drugs do not deal with the cognitive impairment, which is one of the most debilitating aspects of schizophrenia,” he said.

“Clozapine is the most commonly prescribed antipsychotic for schizophrenia, but it was developed in the 1950s, and since then, there’s been no major leap forward in how we treat the disease.”

Burne’s research group is working on developing their animal models to apply to human research models, which would take the next step and hopefully get some of the answers they’ve been searching for.

“We use animal models where we can’t answer those questions in people, and as soon as it turns out that we have samples from humans to answer the question, the research shifts there,” he said.

“There is still a stigma around mental illness but, honestly, with the complexity of the brain, it’s a marvel most of us turn out relatively problem-free.

“We just hope our work can help those who have stumbled due to factors beyond their control.”