A one-eared dog named Van Gogh created such favorable impressions that he achieved his masterpiece: finding a loving forever home.

It’s a remarkable turn of events for the 7-year-old pit bull mix, who lost his left ear after being used as a bait dog in a dogfighting ring in North Carolina.

Jaclyn Gartner, founder and president of the nonprofit Happily Furever After Rescue in Bethel, Connecticut, saw a photo of the injured, bleeding dog on social media and immediately knew she wanted to help him.

Inspired by her late pit bull mix, Tyler, she created her foster-based rescue in 2020 specifically to help overlooked shelter dogs like pit bulls. So Van Gogh really tugged at her heartstrings. 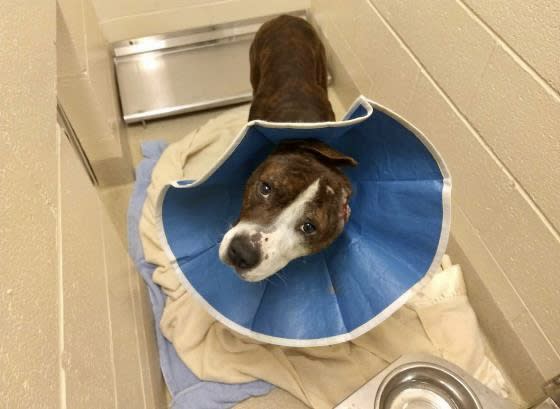 “The second I saw his picture online, I just had love for this dog,” Gartner, 34, tells TODAY.com. “The smile he had was just so big, and he seemed so sweet. I spoke to the shelter about him and they said he hadn’t gotten any interest.”

One of her volunteer fosterers offered to take him in, and volunteer pilots with the nonprofit Pilots N Paws flew Van Gogh to Connecticut. 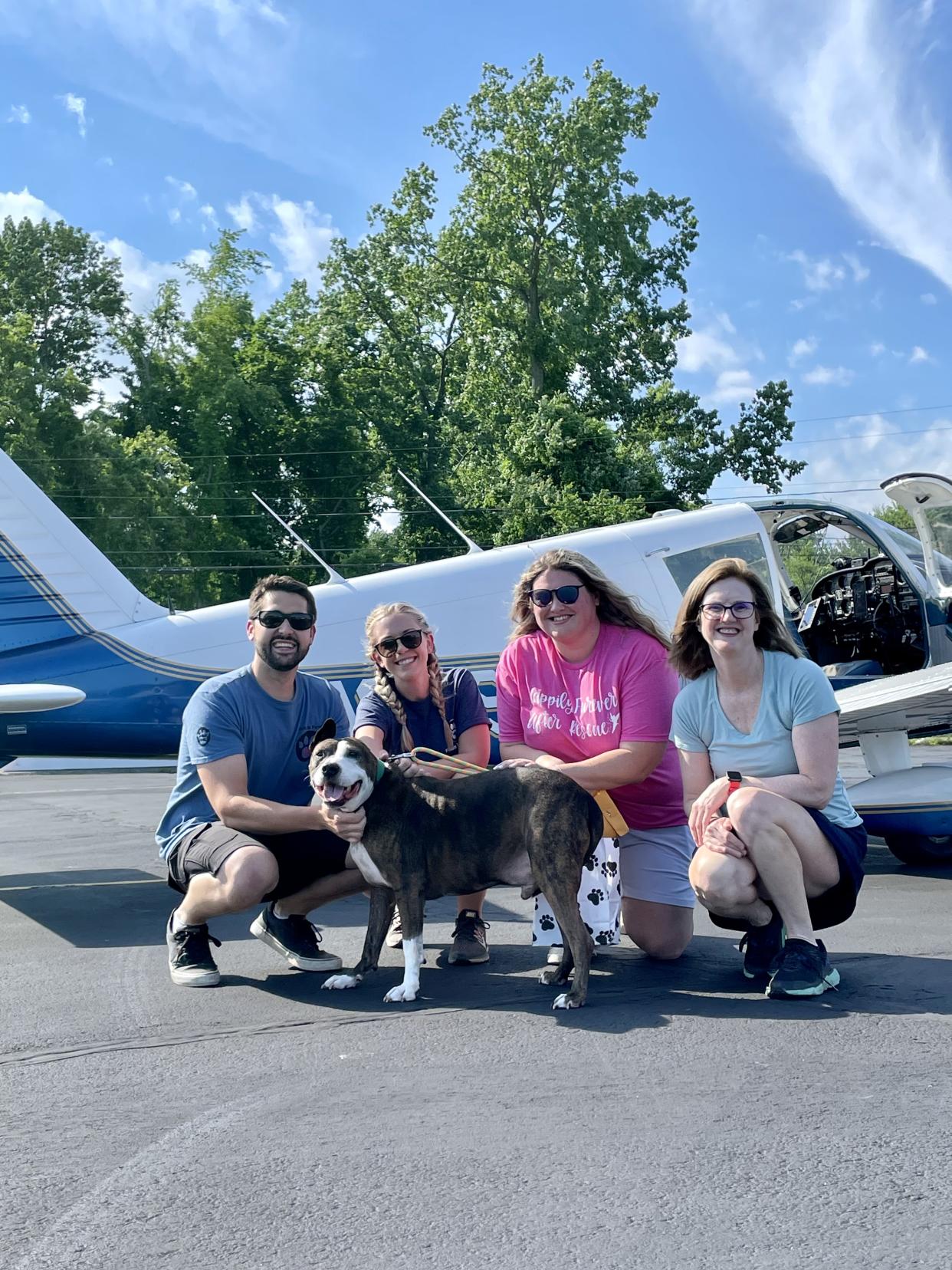 “When he came off, he was wagging his tail and rubbing up against everybody,” she says. “He was so friendly right at the start.”

She finds that friendly nature inspiring given what he went through. Neighbors shared with rescuers that Van Gogh was a stray before people snatched him off the streets and used him as bait in a dogfighting ring for other dogs to attack. Gartner suspects he was dumped back outdoors when they were done with him.

One way or another, rescuers found him bloodied in a drainpipe with an ear so damaged it needed to be surgically removed.

“Van Gogh should have every reason not to trust humans, but he loves people,” she says. “Just because a dog’s been part of that life doesn’t make them a bad dog.” 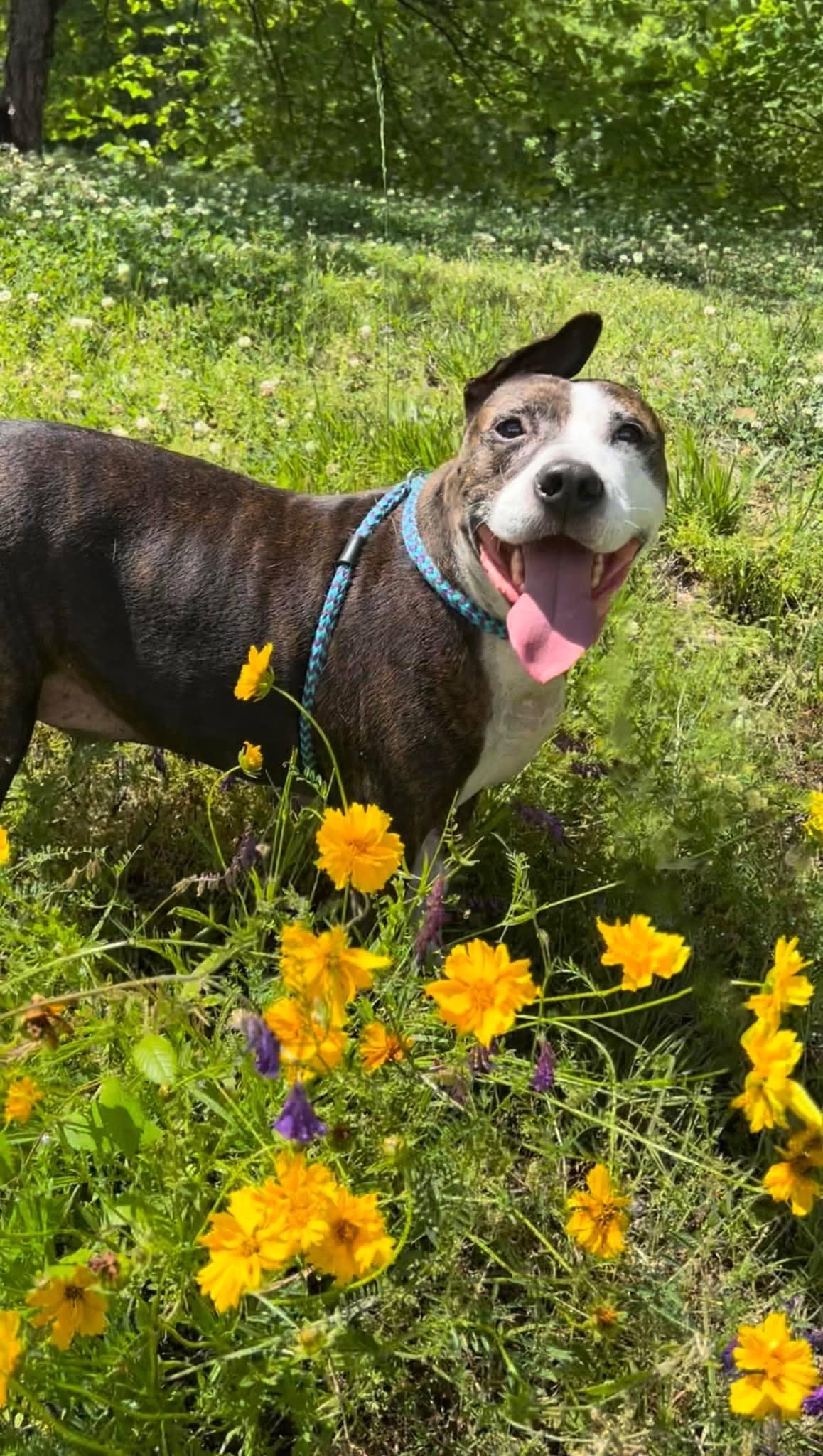 Still, no one stepped forward to adopt him. Because of his experiences, he barks at other dogs and needed to live in a home without other pets. After several months, Gartner decided it was time to take a more creative approach to find Van Gogh a home — and the solution was right in his name.

Gartner decided to find a way for the dog to re-create Vincent van Gogh’s “The Starry Night” as a gift for a potential adopter. 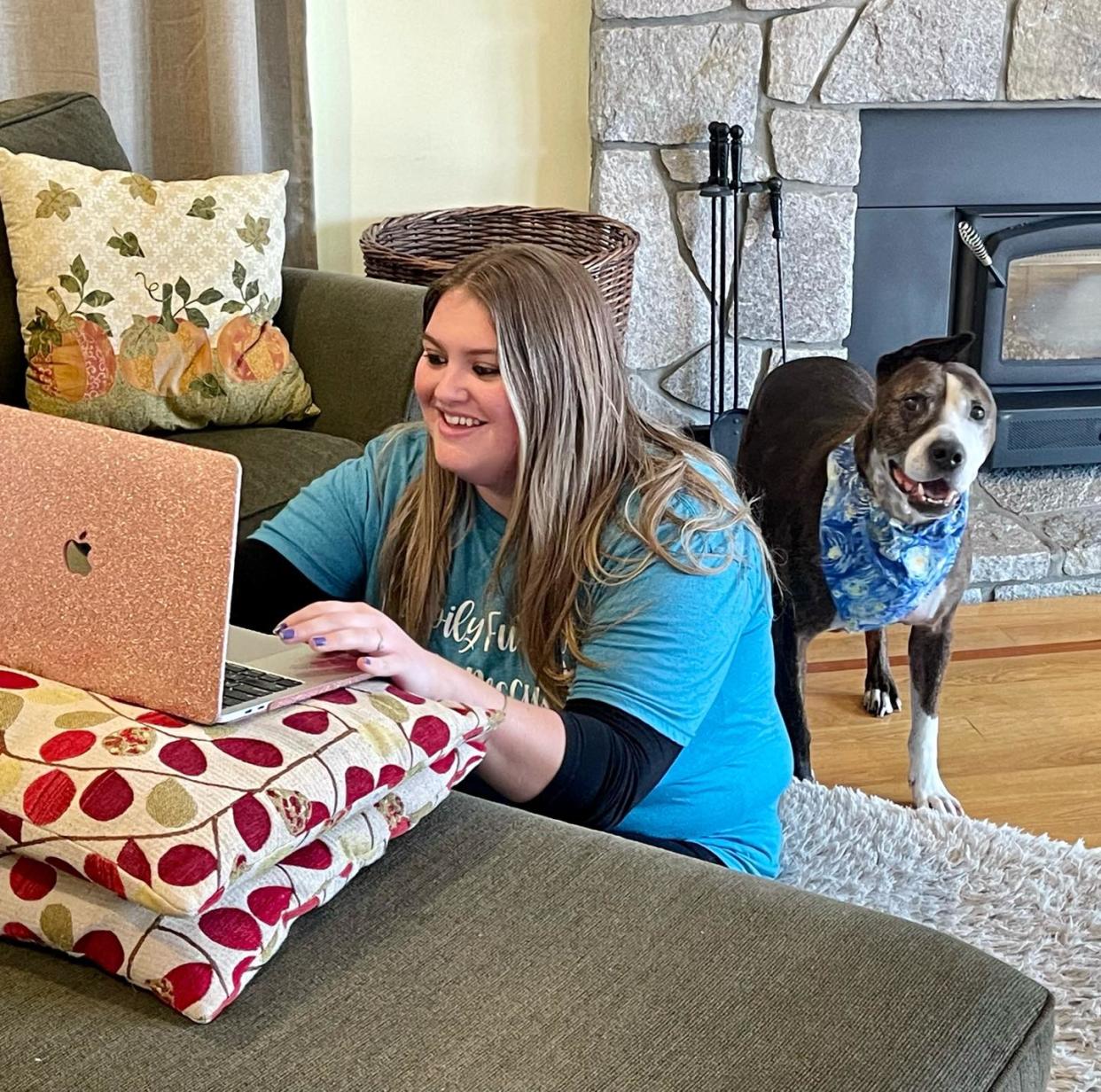 She placed dollops of paint on an 8-by-10-inch canvas, which she sealed into a large plastic bag. To inspire Van Gogh’s inner artist, she smeared a thin coat of peanut butter on top of the plastic. (She was careful to avoid using sugar-free peanut butter because it contains xylitol, which is toxic to dogs.)

Van Gogh’s foster family didn’t eat peanut butter, so they didn’t know if he would like it. But with the tasty canvas on the floor in front of him, Van Gogh eagerly got to work licking off the treat — and spreading the paint into impressionistic art.

“It was adorable,” she says. “He was really enjoying it.” 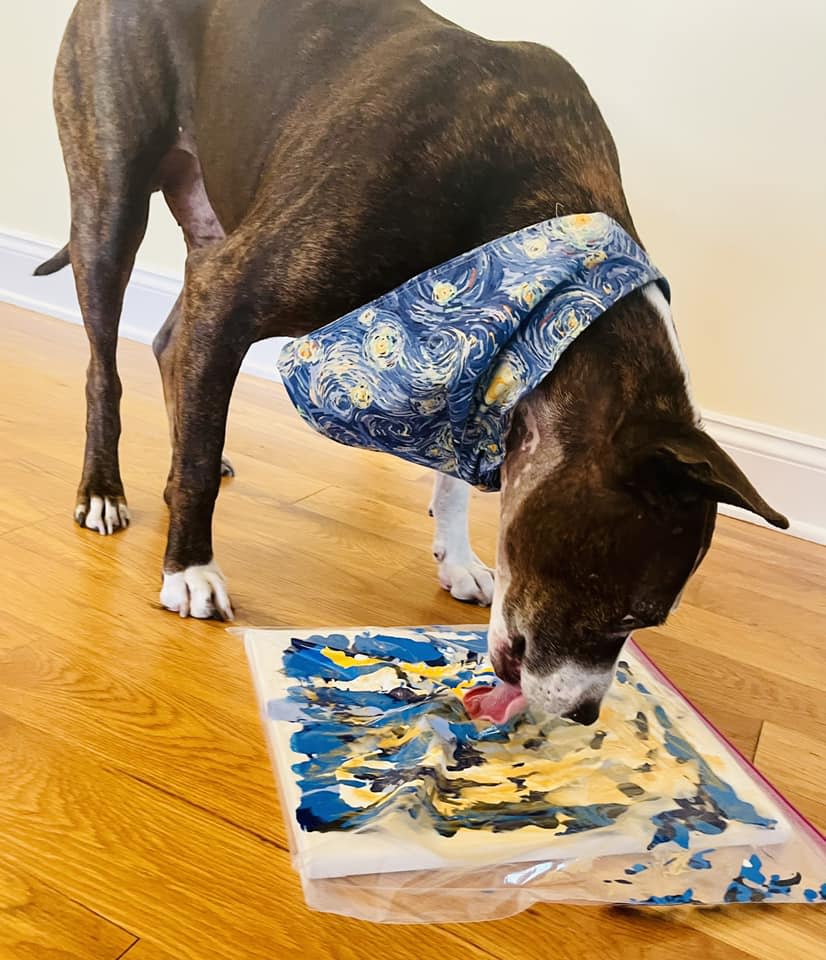 In fact, he enjoyed it so much that Gartner decided to let him keep “painting” more art for a special adoption event with Van Gogh as the sole attraction. She advertised his “art gallery” showing on social media and set up food and drinks at a volunteer’s home. 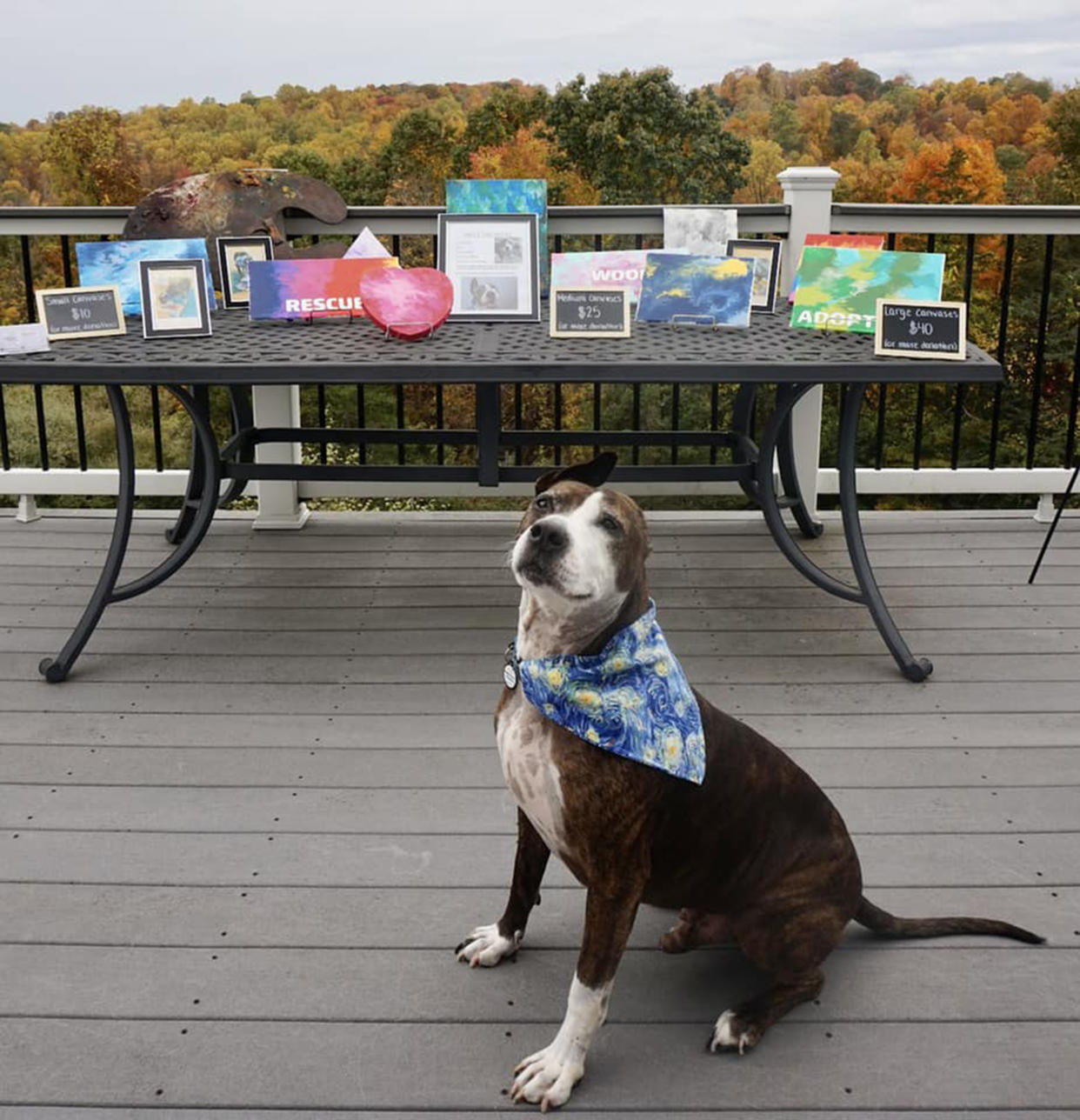 However, only two people came to the event. Puzzled, Gartner shared her disappointment on Facebook, and then things changed.

Posted by Happily Furever After Rescue on Tuesday, October 25, 2022Van Gogh was so excited for his big art debut over the weekend…he was all decked out in his Starry Night bandana and…

Meanwhile, Van Gogh needed a new foster home because someone in the household was about to have surgery. Volunteer Jessica Starowitz had already offered to care for Van Gogh — even before his fame — and the senior cat she was fostering for the organization had just been adopted. 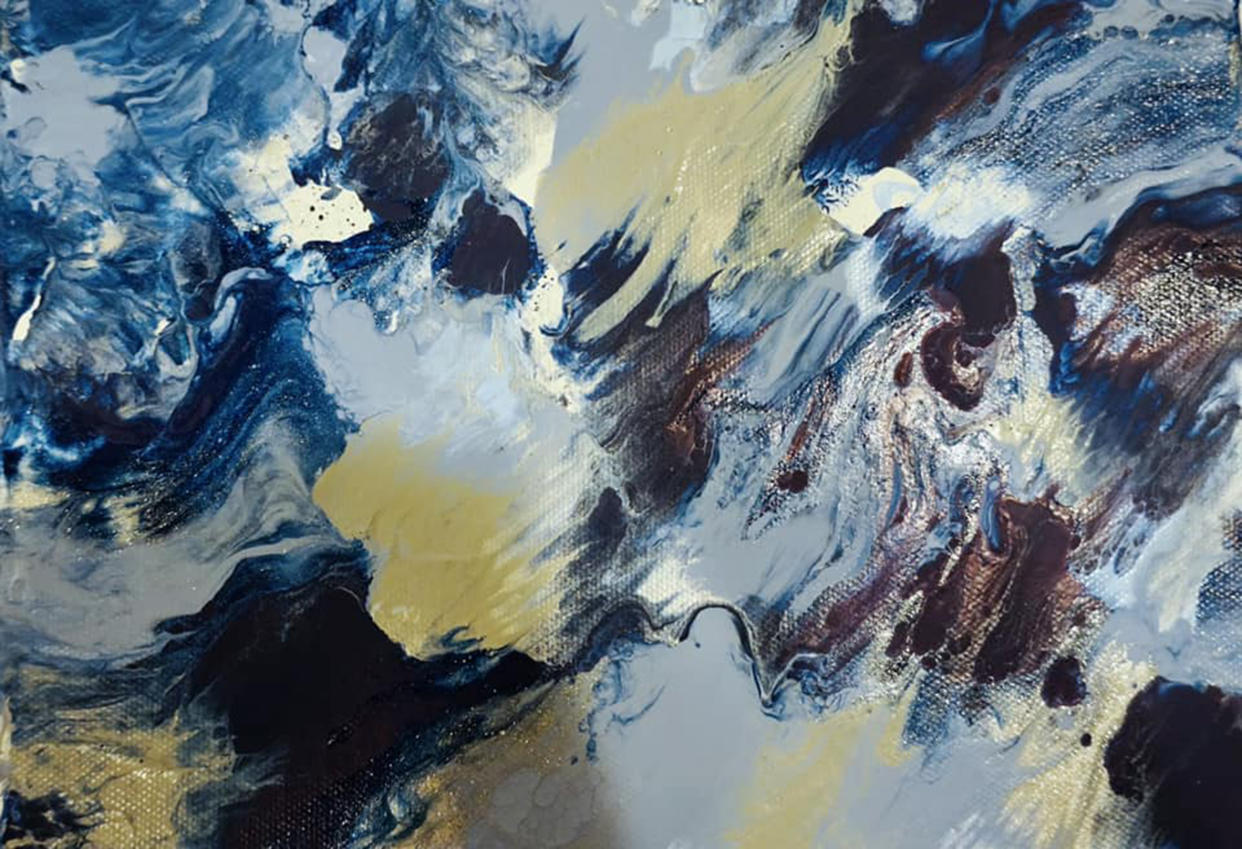 When Gartner asked Starowitz if she’d still like to foster Van Gogh, she immediately answered yes.

“She came over and met him, and they instantly hit it off. He loved her, and she loved him,” Gartner says. “So after she left, I texted her, ‘Is it too soon for me to ask if you would ever consider adopting him?’”

“I didn’t adopt him to paint and make money off him,” Starowitz, 44, says. “I adopted him because I fell in love with him.” 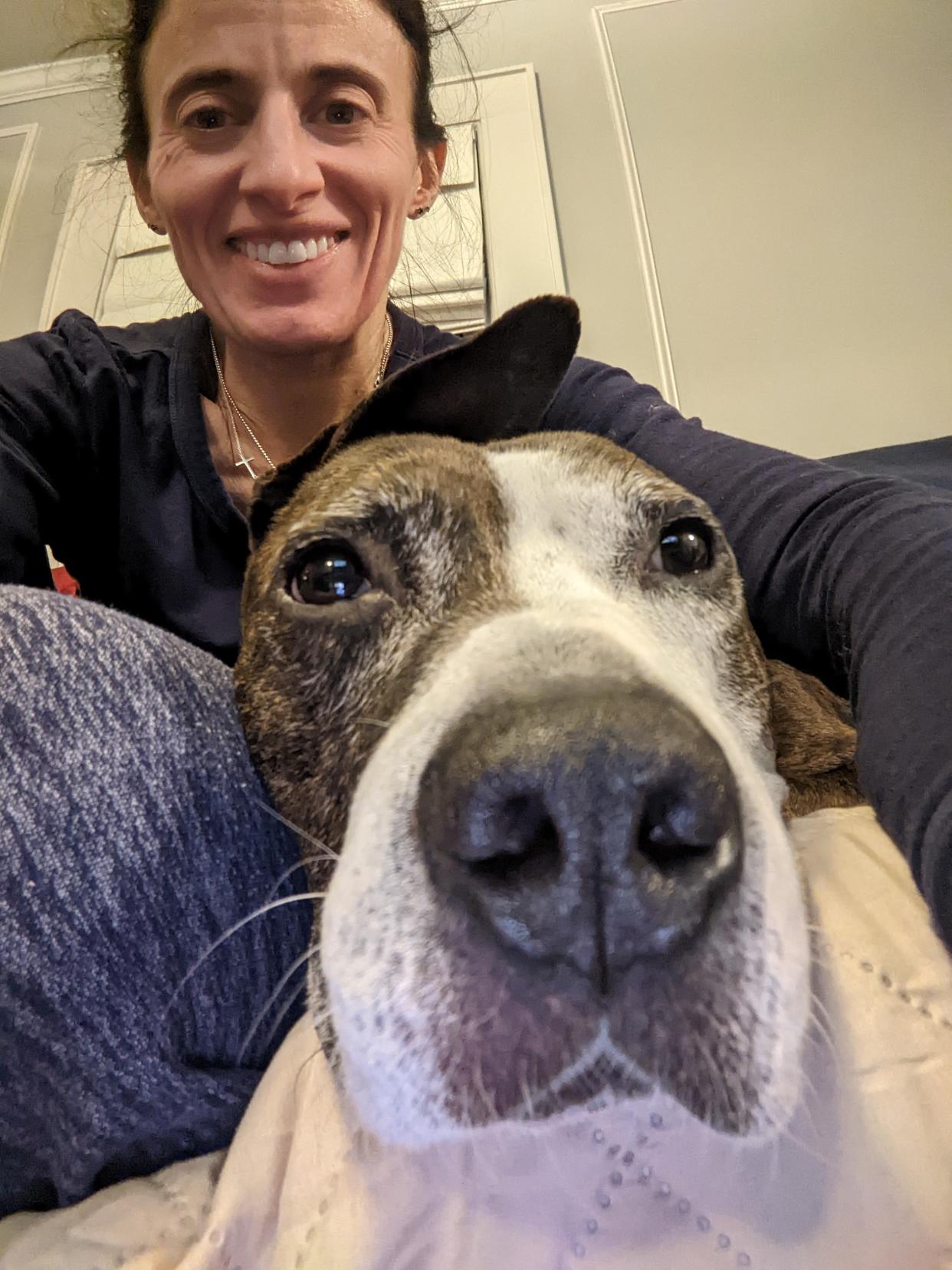 They enjoy taking a 2-mile walk together each morning, playing tug in the backyard and snuggling on the couch to watch Hallmark movies. Van Gogh grunts happily whenever she scratches his rump.

Starowitz also works with a positive reinforcement trainer to help Van Gogh feel less anxious around other dogs; she documents his adventures on Instagram. 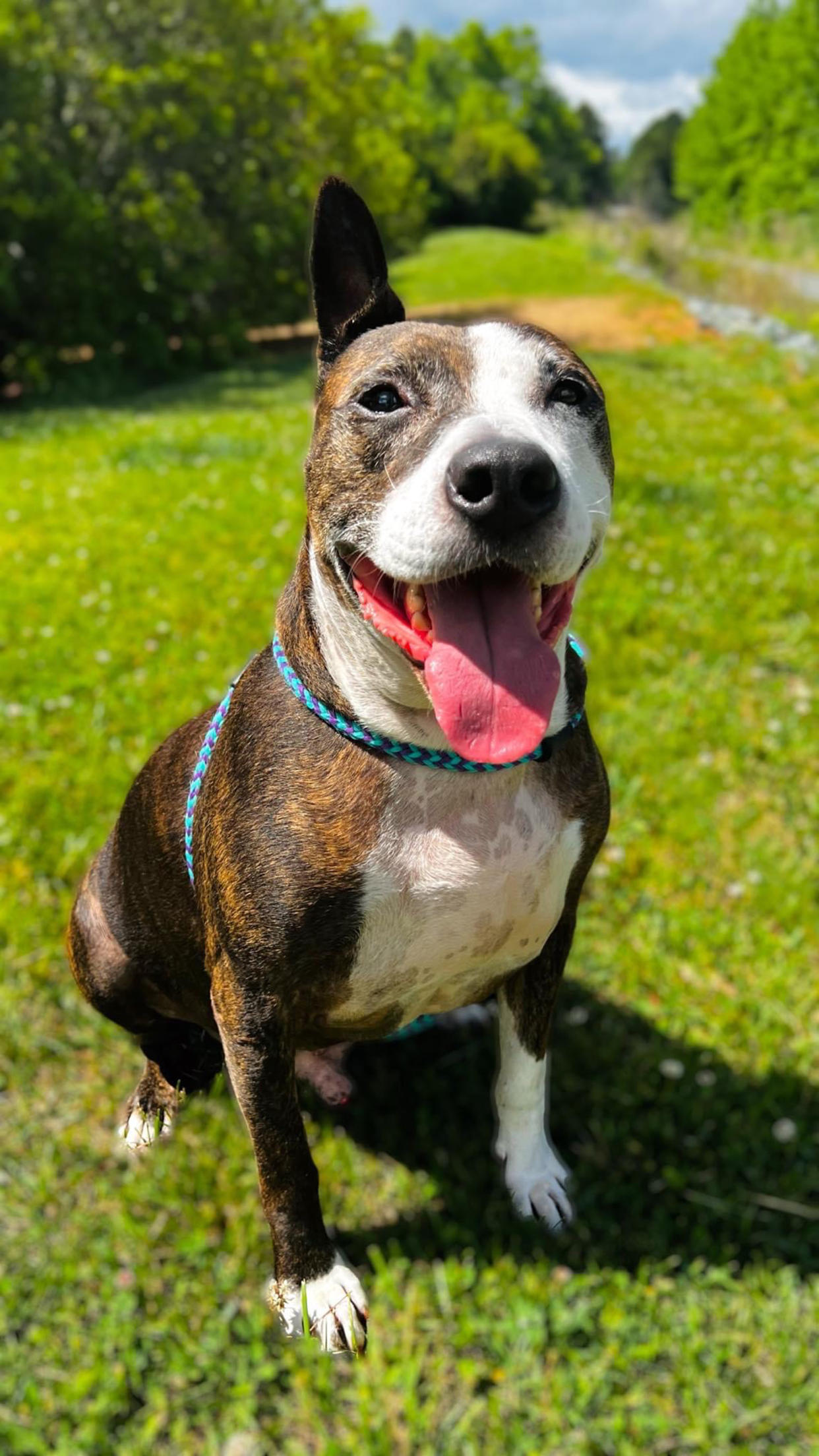 She loves reading messages from other people with pit bull-type dogs. Before adopting Van Gogh, she had two toy poodles, so caring for a 70-pound pit bull mix is a new experience.

“They’re such an amazing dog with a bad rap,” she says. “Once you meet one, you want to meet them all.”

He received 10 commissions on Black Friday alone. Art teachers have begun telling students about Van Gogh and requesting art for their classroom walls.

“We’ll let him keep painting until he says he’s done with it — probably if we run out of peanut butter or liverwurst or snacks,” Starowitz says with a laugh. 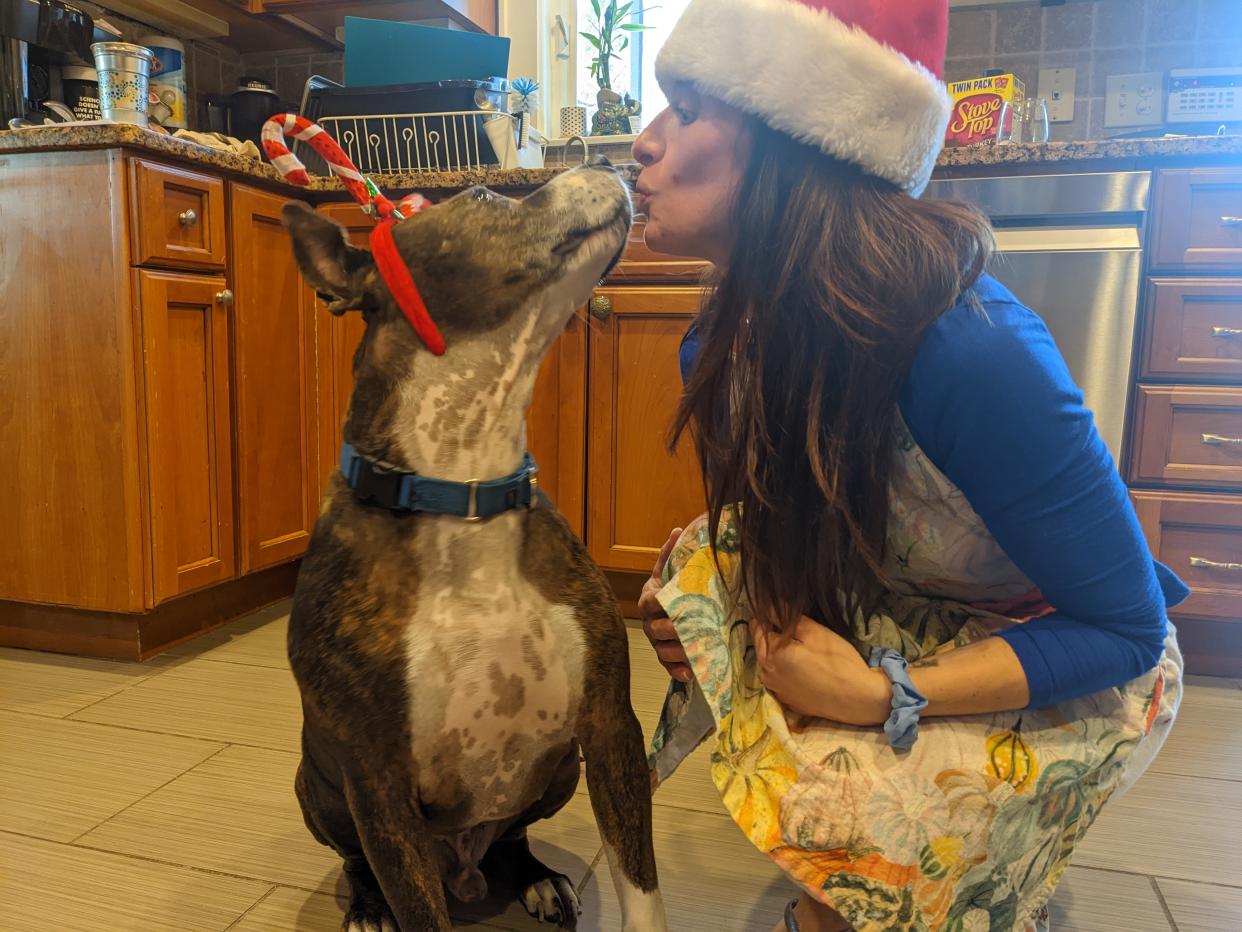 Starowitz says she’s happy to help the rescue that saved Van Gogh as much as possible and that all profits generated will always go toward the cause. She’s not interested in personal profit — though she wouldn’t mind having him paint a piece for her office once he’s filled his existing orders.

In fact, she’s a longtime fan of Vincent van Gogh’s work and has several prints in her home. Her two sons even gave her a Lego set of “The Starry Night” for Mother’s Day. 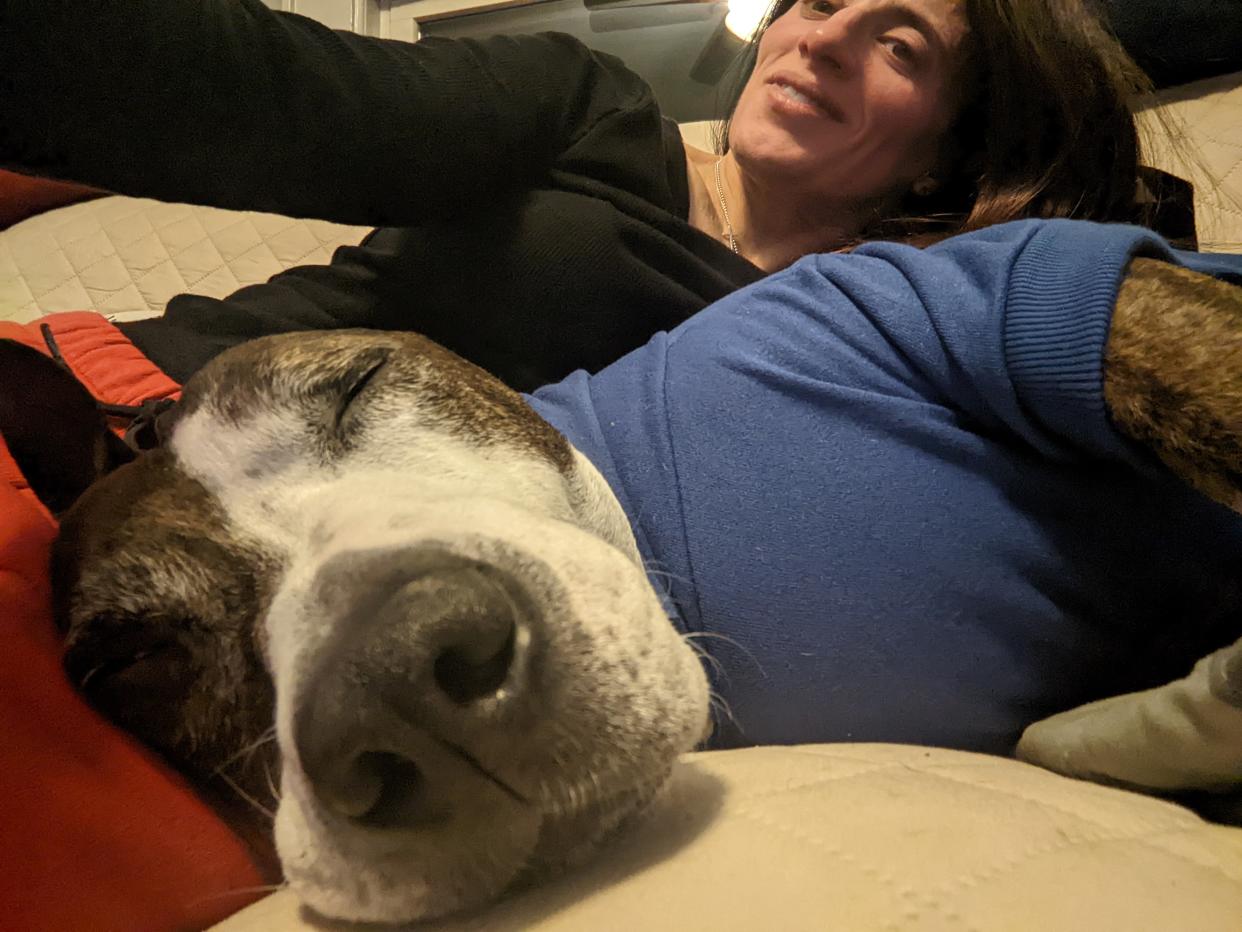 Spreading the word about fostering and adopting pets in need is an even deeper passion, though. With shelters across America overflowing with dogs and cats, Starowitz hopes Van Gogh’s extraordinary journey will inspire others to offer an animal a second chance.

“Dogs give you unconditional love, so you just return the favor,” she says. “See how fun it can be.”