‘One million jabs a day’: South-east Asia’s race to vaccinate

Singapore: In Australia, Prime Minister Scott Morrison has said the vaccination rollout is not a race.

In south-east Asia it very much is, and those in the midst of it are doing whatever they can to get ahead.

The divide been wealthy and developing countries on vaccine accessibility has been laid bare in this part of the world. On top of grappling with highly contagious variants bringing in a new infection wave, most south-east Asian countries have barely got off the starting line in the pursuit of herd immunity.

But as supply begins to increase a little in some nations, they are demonstrating an urgency to distribute it. 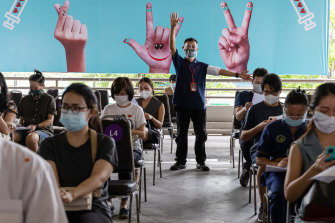 People wait in an observation area at a vaccination hub set up in a Bangkok shopping centre after receiving the AstraZeneca Covid-19 vaccine on Monday.Credit:Bloomberg

Thailand is a case in point. Having contained the virus reasonably successfully until a recent outbreak linked to a nightclub district triggered case numbers to soar, its vaccine program had been sluggish and disorganised, to say the least.

However, having finally got its hands on a large supply of AstraZeneca doses – manufactured by a company in Bangkok owned by the king – the country of 70 million people is now moving in a hurry. On Monday, the first day of its mass inoculation scheme, the government said shots were given to 416,487 people, 388,872 of them receiving their first. On Tuesday, there were another 472,128 doses administered, with 428,459 being people’s first shot.

That rollout pace allowed Thailand’s overall number of doses in arms to rise from 4.2 million to 5.1 million in the space of two days. 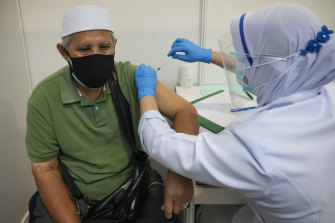 In Malaysia, which has experienced the worst rate of COVID-19 infection in the region in the past six weeks, surpassing even India in terms of cases per million people and leaving intensive care units overcapacity, the pace hasn’t been as fast.

But on Wednesday, the government’s June goal of 150,000 administered doses per day was reached.

Among the vaccines Malaysia is buying are Thai-manufactured AstraZeneca and if supply can sustain it, health authorities have set a target of 200,000 doses per day in July and 300,000 per day in August.

Indonesia, which kicked off vaccinations in January and has set itself the task of inoculating 181 million of its 270 million people, has had a daily jab rate of about 260,000 in the past week based on figures from BNPB, its national disaster mitigation agency. 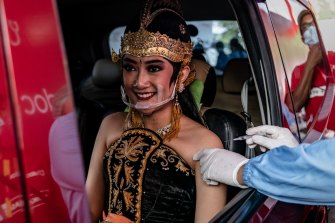 A woman wearing Javanese traditional costume receives a dose of the Sinovac (CoronaVac) vaccine at a drive-thru vaccination spot in a temple complex in Yogyakarta, Indonesia. Credit:Getty Images

By Wednesday, 11 million people had been fully vaccinated, with 18 million having had at least one dose, but with concerns about a major surge on the horizon there, President Joko Widodo has set the bar higher.

“We hope that the June target of 700,000 jabs per day can be achieved so that in July we can do 1 million jabs a day,” he said while visiting a mass vaccination facility in Depok city, West Java on Wednesday.

Indonesia is turning to China for much of its vaccine supply and in that respect, is not alone.

Cambodia is second only to Singapore in the region in terms of vaccination rates and is ahead of most of the pack with purchases and donations of Chinese Sinovac and Sinopharm.

It’s a strategy Vietnam hoped to avoid given its resistance to Chinese influence, but with only 1 per cent of its 96 million population having had at least one shot, it has now given emergency approval for Sinopharm. The Philippines, with only 1.5 million of its 108 million people fully vaccinated, has this week done the same and hopes the expected arrival of 15 million doses of the Chinese vaccine will give a much-needed boost to its rollout.

For them, the race has only just begun.