Opera Australia’s first Melbourne performance in 16 months descended into a Marx Brothers farce on Thursday night thanks to an almighty technical snafu that sure put the Aiii into the company’s hi-tech production of Aida.

As the lights dimmed in the State Theatre in the Arts Centre Melbourne, audiences eagerly awaited the start of the production of Verdi’s classic, which uses enormous spinning digital LED screens to enrich the tale of grand passion in Ancient Egypt, with imagery including includes a serpent, a panther, a horse galloping through the desert toward the audience, the Nile shimmering in the moonlight, a serpent and a panther. 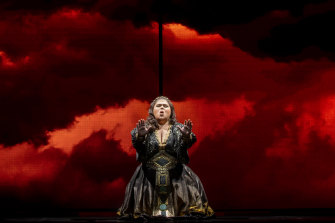 Alas, the coronavirus community transmission up in Sydney had cancelled all drinks functions and kept staff who had travelled down to Melbourne confined to their hotel rooms, otherwise they would have spent a long first act squirming in their seats given what was to follow.

As the characters launched into the first scene, it quickly became obvious that only those fluent in operatic Italian would be able to follow the goings-on.

The surtitle screen above the stage, which translates the sung arias and recitative into English, had happily informed us before the overture that Qantas was a sponsor of the event.

But once its job was to tell us what the “Egyptians” on stage were singing, it stubbornly went blank. Audience members looked at each other in bewilderment while those seasoned opera goers who’d seen the classic before sat there smugly.

After about five minutes of incomprehensible high-volume singing, some words abruptly appeared: “Whatever have you done? Oh you poor man.” And remained on screen for another five minutes, as the audience wondered if this was a genuine passage from the opera or a passing judgment on the tech crew. 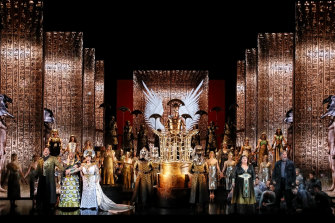 The performance was affected by a technical issue that left the audience confused.

Finally, with the opera well underway and the full cast on stage chorusing enthusiastically about the upcoming war with Ethiopia, the screen flashed and working surtitles were restored at last. Sort of. Because for the rest of the first act, the phrase “Whatever have you done? Oh you poor man.” remained stuck at the top of the screen, accompanied by a little frozen mouse pointer.

Among those looking on awkwardly in the audience were Melbourne Symphony Orchestra managing director Sophie Galaise, chairman David Li and wife Angela Li.

Arts Centre boss Claire Spencer was there as was patron Maureen Wheeler. ABC News Breakfast host Michael Rowland showed no signs of fatigue while doubling down from attending the premiere of The Wedding Singer musical on the weekend, former Real Housewives of Melbourne star Pettifleur Berenger. Rhonda Burchmore and husband Dr Nikolai Jeuniewic took in the music, as did Casey Donovan and partner Renee Sharples, Tom Gleisner, Lisa McCune, Katrina Holmes a Court and Shaynna Blaze. She’s not just about selling houses, folks.

Opera Australia top brass were left welcoming the return to Melbourne but ruing the irony that they could stage an opera with extraordinary computer animations of two storey-high buff half-naked Egyptian gods wandering across the stage, but they couldn’t pop the lyrics on a screen.

descends, Into, M, opera, Premiere?
You may also like: