Smashing pumpkins! Spectacular moment a 1,200lb gourd is dropped 100ft into a swimming pool in stunt at harvest festival

If you’ve ever wondered what it would look like if a giant pumpkin was dropped 100 feet into a swimming pool, look no further.

Footage from the annual Bauman Harvest Festival in Gervais, Oregon, shows a 1,200lb pumpkin smashing into huge chunks as it hits the water after being winched up in the air on a crane.

The Giant Pumpkin Drop is just one of the pumpkin themed activities at the festival that takes place from the end of September to the end of October every year. 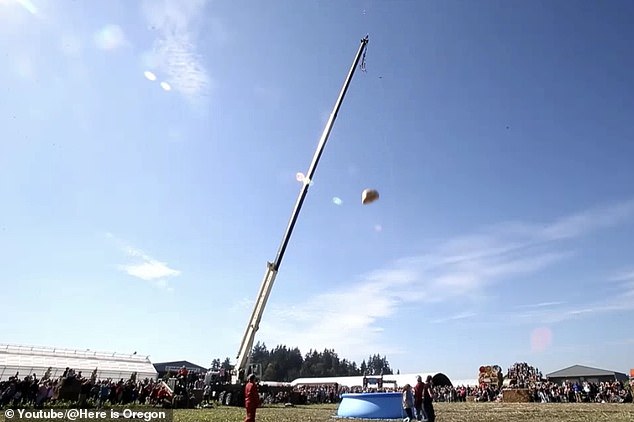 The pulley, at the Bauman Harvest Festival in Gervais, which has a flag on the top, continues to be lifted off the ground until it reaches 100ft

Footage of the stunt shows hundreds of colorful balls flying on a wave of water as the giant gourd splashes down.

Large crowds at the Oregon harvest festival cheer and shout ‘higher’ as the pumpkin is lifted up in the air.

The pulley, which has a flag on the top, continues to be lifted off the ground until it reaches 100ft. 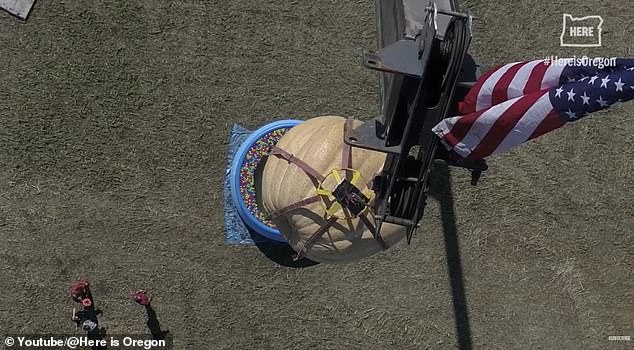 Then the audience counts down from 10 while they wait for the pumpkin to be dropped.

As the rope is released, the gourd bounces off the swimming pool, showering the ground with water and ball pool balls.

The Oregon harvest festival happens every year and focuses on pumpkins in their many shapes and sizes and includes pumpkin-themed patches, donuts and artwork.

Organizers this year used the 1,200lb gourd because it had developed a hole while it grew and had started to rot, ruling it out of entry to the festival’s Giant Pumpkin Weigh-Off.

Instead it made a spectacular – and very messy – exit. 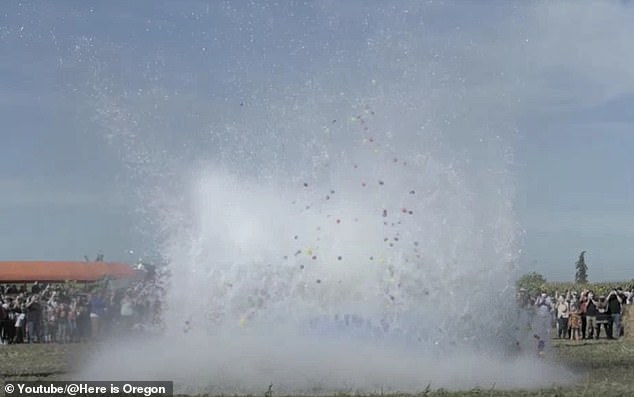 As the rope is released, the gourd bounces off the swimming pool, showering the ground with water and ball pool balls

After the Weigh Off and Pumpkin Drop the giant pumpkins – each weighing more than 1,000lbs – go on display at the festival.

The biggest squash this year weighed 2,030lb and the biggest field pumpkin weighed in at 151.5lb.