Follow
Home » World News » Our COVID rear-vision isn’t pretty, but we can’t ignore the oncoming threat in our windscreen

Our COVID rear-vision isn’t pretty, but we can’t ignore the oncoming threat in our windscreen

Australia’s COVID-19 strategy has run well and truly off the road. Just two weeks ago, NSW Health Minister Brad Hazzard predicted the state might reach 25,000 cases by the end of January. At the time, this was framed as a “worst-case scenario” and dismissed as hyperbole. 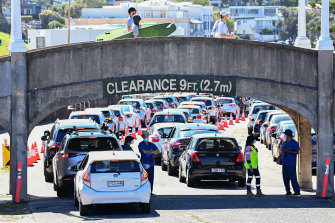 The queue for a COVID-19 test at the Bondi Beach drive-through.Credit:AAP

Well, based on Sunday’s test-positivity rate of 20 per cent, we conservatively estimate the true number of new daily infections to be well over 50,000. It’s unlikely one in five people in the population has COVID-19; if we did more testing, the test-positivity rate would fall, but we would also find more cases. If you found solace in the drop in new cases reported in NSW on Sunday – down to 18,278 from the 22,577 on Saturday – think again. Sunday’s numbers were detected from 90,019 tests, Saturday from 119,278. If we’d tested as many, we’d likely have recorded more than 24,000 cases on Sunday.

Policymakers point to current hospitalisations as low and say “everything is going to plan”. But this ignores the fact hospitalisations lag cases by one to two weeks. Since just Friday, the number of COVID cases in hospital has risen by 28 per cent and in intensive by 20 per cent. Two weeks ago, recorded cases were 10 times lower than they are now. How sure are we that ICUs won’t be overwhelmed later this month? Are we planning for that contingency?

Through December, the hospitalisation rate was 2 per cent for Omicron cases, with the ICU rate 10 per cent of that. That means the likely 150,000 or so true cases for Friday, Saturday and Sunday would translate into 3000 admitted to hospital and 300 to ICU in a couple of weeks’ time. That’s 20 per cent of ICU capacity in a three-day period.

The medical establishment points to low Omicron hospitalisation rates in other countries such as Britain and South Africa to suggest rates will remain low. But those countries had very high rates of pre-Omicron infections (50 per cent and 70 per cent of their populations, respectively), which has been shown to be even more effective than vaccines in preventing severe disease.

In Australia, we’ve been fortunate to avoid the huge death tolls those countries paid for the protection that came from prior infection – and we shouldn’t want it any other way. What it does mean is our policymakers are counting on an unlikely best-case scenario. But good public policy should always involve hoping for the best but planning for the worst. Alas, this lack of contingency planning is part of a pattern of behaviour.

We’ve done many things well during the pandemic. We closed our international border in March 2020 and quickly established contact tracing and testing regimes. We eventually achieved some of the highest vaccination rates in the world. And we used aggressive fiscal policy to cushion the economic fallout.

But there has been a series of failures. The government gambled on two vaccines rather than investing in a diversified portfolio. And then it made an even bigger procurement error on rapid tests, securing exactly zero ahead of time. Our medical-regulatory complex has been asleep at the wheel – too slow to approve vaccines and rapid tests, and giving advice one could charitably describe as capricious.

The unifying theme can be captured in one word: myopia. We were told vaccination wasn’t a race because in March last year there were few cases. We didn’t buy a diversified portfolio because we didn’t anticipate either vaccine running into supply or side-effect problems. We didn’t buy hundreds of millions of rapid tests because we hadn’t reopened yet. We’re still waiting until next week to vaccinate children aged 5 to 11 because we chose yet again to wait and see what happened overseas.

This isn’t “hindsight heroism”, as the Prime Minister puts it; there has been a foresight failure. Which brings us to the person at the epicentre: Scott Morrison. In March 2020, he wanted to “go to the footy” rather than secure our borders. He turned then chief medical officer Brendan Murphy’s ill-conceived “not a race” comment into a slogan and a mentality. Morrison flip-flopped on whether state lockdowns were justified. And he talks of “staring down” COVID-19 as though the virus could care less.

Then, on Thursday, after listening to “all the private industry who gave us that advice”, Morrison refused to make rapid tests free and available to all, yet they are a common good that should be paid for by the Commonwealth. The chaser came on Friday when known-positive cases were allowed to leave isolation without a negative rapid test result because there aren’t enough tests to go around.

We thought things couldn’t get any worse than the bungled vaccine rollout that was among the greatest policy failures in Australian history. Alas, here we are. Shame on us for imagining they’d learnt their lesson. Morrison says he doesn’t want to look in the rear-view mirror, and we can see why. But he also refuses to look out through the windscreen. So it’s no wonder we’ve run off the road.