Heavy rainfall across the state overnight has broken records in the Otways and sparked warnings for drivers on the state’s roads.

In the Otways, more than twice the average monthly rainfall for May fall in the last 24 hours alone.

Chris Arvier, duty forecaster at the Bureau of Meteorology, said the whopping 115.8mm recorded at Aireys Inlet in the 24 hours since 9am Monday was “an absolute stand-out”. 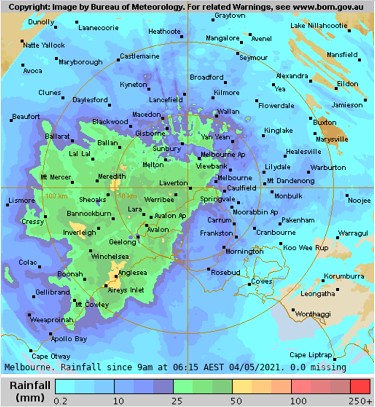 Rainfall totals across Melbourne since 9am Monday.Credit:Bureau of Meteorology

“The average May rainfall is 53mm for Aireys Inlet, so that’s well above a month’s rain in a day,” he said.

“Even a really wet month for Airey’s Inlet would be 100mm, so even if we had this rainfall in a month it would be above average so [the last 24 hours] is exceptional.”

Mr Arvier said the heaviest rainfall occurred before midnight on Monday, when 60mm of rain fell in a single hour.

“It’s pretty unusual to see that amount of rainfall in one day,” he said. “Sometimes we get what we call a convergence line where clouds are all meeting one another at one spot and it can happen along mountain ranges – so the Otways on the surf coast it is where we can see this happening.”

Monday night’s rain which fell heaviest across the Great Ocean Road, Geelong regions and Melbourne’s west prompted warnings to drivers of dangerous conditions on the state’s roads this morning, as more rain is expected today.

Olympic Park near the CBD also recorded and 30.8mm.

The State Emergency Service issued a warning for slippery roads and reduced visibility on Tuesday morning. Flooding affected at least one road – Kings Road at Sydenham.

Drivers are urged to reduce speed and maintain a greater distance between vehicles in front.

The SES responded to 60 call-outs for help overnight right across the state, with 78 in total recorded in the 24 hours to 7am. According to a spokeswoman, 31 calls were for building damage, 17 were for floods and 17 were for trees down.

Mr Arvier said at least another 5 to 10mm would fall across Melbourne before the skies began to clear in the early afternoon Tuesday. The top forecast temperature is 15 degrees.

“It’ll start to ease off from [7am] onwards but we’re still looking to a pretty wet day,” he said.

“Then it’s drying out nicely for the rest of the working week, fairly cool but nice conditions and possibly a few showers around on the weekend,” he said.

If you require assistance for building damage, floods or trees down call the State Emergency Service on 132 500.

breaks, Deluge, overnight, R., rain
You may also like: