Detroit US marshal details arrests of James and Jennifer Crumbley

The office of Oakland County Prosecutor Karen McDonald released a troubling drawing said to have been created by school shooting suspect Ethan Crumbley the day of the alleged attack at Oxford High School that claimed the lives of four students.

One image, submitted as an exhibit in a Thursday court filing in a criminal case against Crumbley’s parents, appears to show drawings of a gun and a bullet on a math worksheet.

“The thoughts won’t stop,” it says under the gun, followed by, “Help me.” Above the bullet it says, “Blood everywhere.” Further down on the page are other handwritten words and phrases including, “My life is useless.” 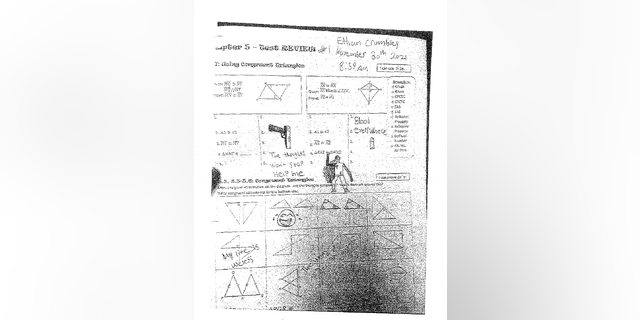 A second image shows the same paper but with those drawings and most of those words crossed out. New, more positive phrases such as, “Were all friends here [sic],” I love my life so much!!!!” and “Video game this is,” are written.

Prosecutors claim that Crumbley made those changes “after the drawing was discovered.”

Prosecutors with McDonald’s office say the drawings were among of several signs that Crumbley was troubled – signs which reportedly include messages to his mother. In their filing, prosecutors note that Ethan had been “sending his mother disturbing texts about his state of mind,” and that Ethan’s parents “were made aware, in graphic form, of the serious risk posed by their son prior to the shooting.”

Ethan Crumbley also kept the head of a baby bird in a jar in his room, prosecutors say, and once brought the item to school and left it in a bathroom. Crumbley was also “seen watching violent video of shootings” on the morning of November 30th.

McDonald’s office has filed charges against Crumbley’s parents James and Jennifer Crumbley, accusing the pair of being grossly negligent in ignoring clear signs that their son was unwell, and then purchasing a gun for him days prior to the shooting.

“Despite having all this knowledge, Defendants failed to take even the simplest action that would have prevented the massacre,” the court filing says. “All they had to do was tell the school that they recently purchased a gun for their son, ask him where the gun was, open his backpack, or just take him home.”

Instead of paying attention to their son, prosecutors claim, the Crumbleys were preoccupied with “extra-marital affairs, financial issues, and substance abuse issues.”

The court filing was submitted in support of the prosecution’s request for the court to maintain the bond amount set at $500,000 for the parents, whose attorneys are seeking a lower amount of $100,000 cash. They face charges of involuntary manslaughter and according to the Detroit News are scheduled for a hearing on January 7.