The first paralysed man to complete the London Marathon was left heartbroken when he couldn’t top his world record this year – after his hi-tech robotic suit ran out of batteries near the home straight.

But the determined father-of-three faced challenges with his state-of-the-art robotic suit, which provides hip and knee motion.

The batteries weren’t providing as much charge as they should have been and only had enough power to get 38-year-old Simon to the 22-mile mark – 4.2 miles short of the full distance. 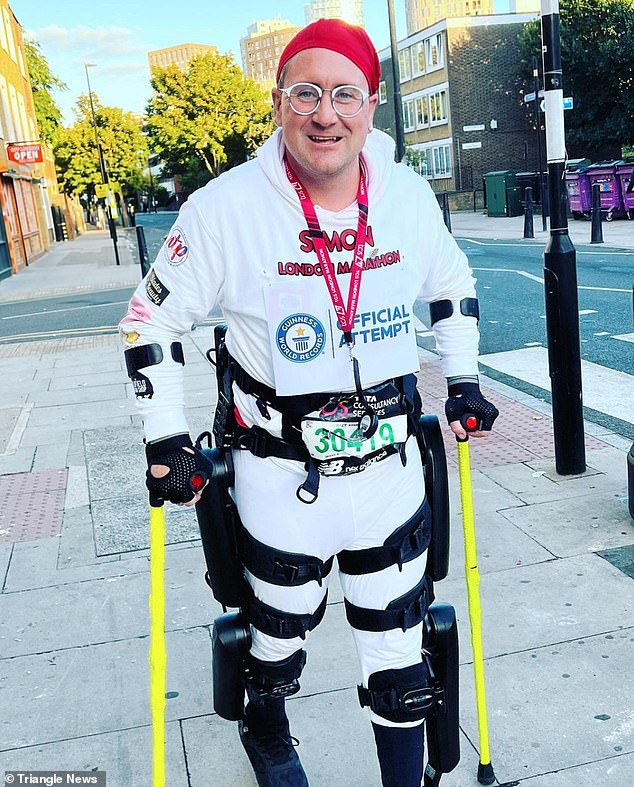 Simon Kindleysides has already completed one London Marathon after being left paralysed following a brain tumour and stroke in 2013 and hoped Sunday’s event would be his second. Simon is pictured competing at the 2022 London Marathon 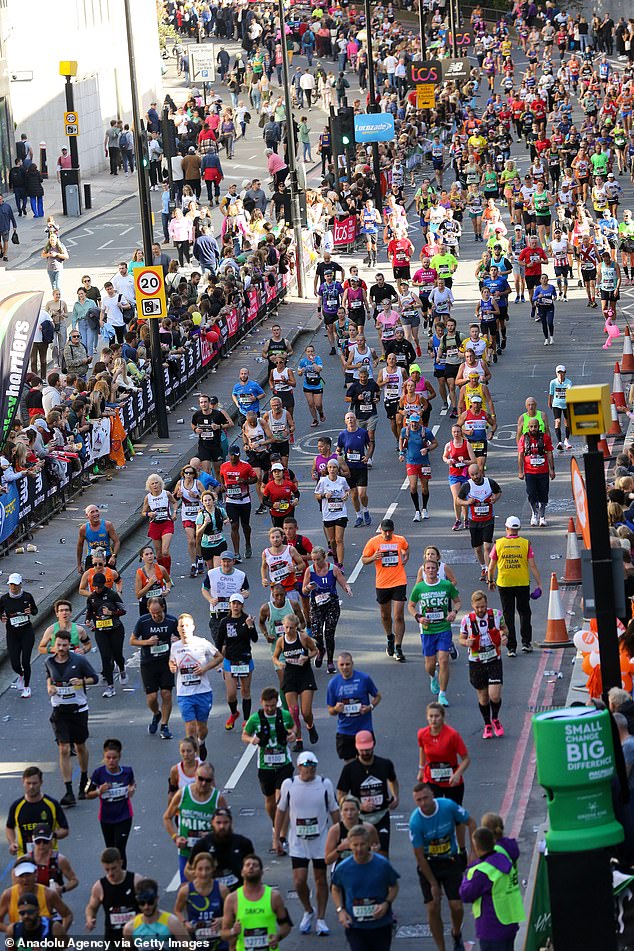 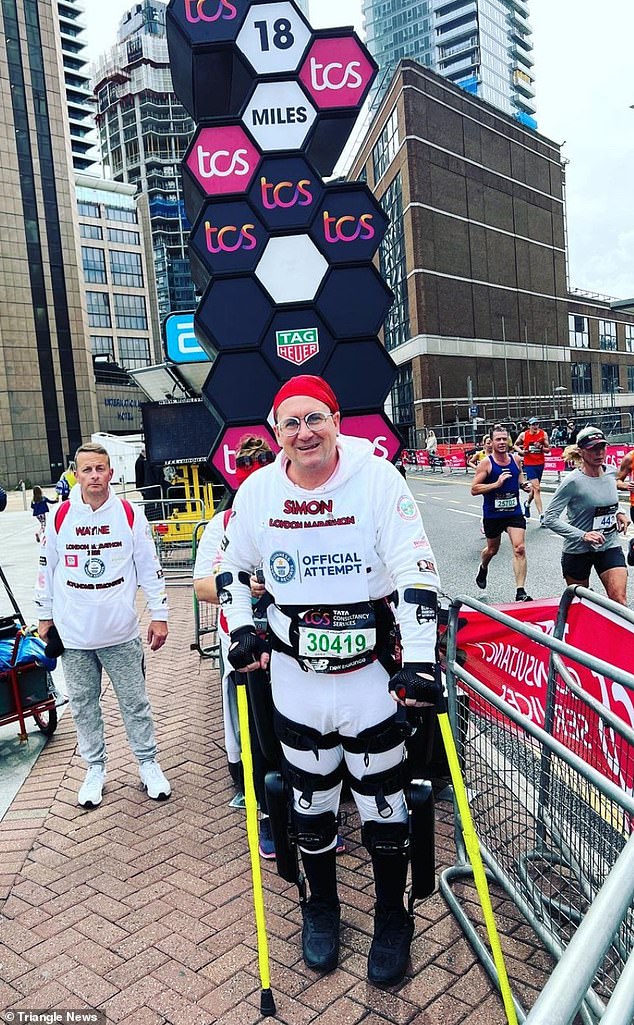 Simon, 38, struggled with battery problems in his £100,000 robotic suit, which could only get him to the 22-mile mark, 4.2 miles short of the marathon distance. Simon pictured at mile 18

But despite his disappointment, Simon has vowed to full the full distance in the future and is hopeful he might even smash his previous world record.

Simon said: ‘I’m really disappointed knowing I was only four miles from the finish line.

‘We ran out of batteries.

‘The batteries were playing up all day.

‘We’re supposed to get four to five miles out of them but we got two and we only had six sets of batteries.

‘But this isn’t the end of my challenges.’

The former dancer from Blofield, Norfolk, set off for the race on Saturday to allow him enough time to make it to the finish line.

He was raising cash for The Brain Tumour Charity and Teigan Smiles Charity.

In 2013, Simon’s life changed forever when a devastating stroke and a brain tumour which left him unable to walk.

He was rushed to hospital where doctors found he had an inoperable glioma brain tumour and functional neurological disorder.

He was in hospital for four months and when he was finally discharged he was unable to return to his first-floor flat.

Since then, his health woes have continued, with Simon suffering from heart-stopping seizures and a stroke since becoming paraplegic in 2013. 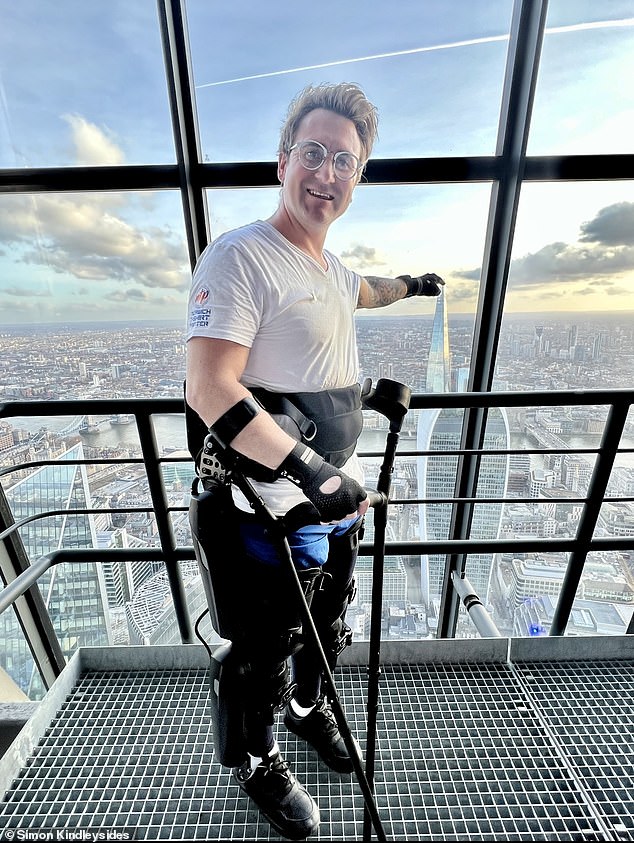 Simon received his robotic legs as a gift from a stranger. In March he bagged a world record as the first paralysed man to climb more than 1,000 stairs at London’s Cheesegrater skyscraper, pictured 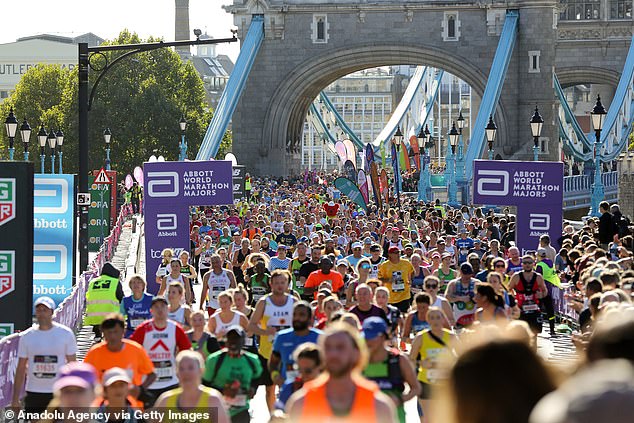 Simon had previously scooped a Guinness World Record at the 2018 London Marathon by becoming the fastest person to complete a marathon distance in a robotic walking device. Pictured is the sea of people taking part in Sunday’s London Marathon

But adventurous Simon refuses to let his disability define him and loves using his ReWalk exoskeleton suit.

ReWalk is a wearable robotic exoskeleton that helps people stand upright, walk, turn, and climb and descend stairs. Each one costs £100,000.

The expensive piece of kit – which Simon straps his legs into to use – was a gift from an anonymous donor in 2019.

He had originally mapped out five years of fundraising to afford the robotic legs.

In March, Simon scooped another world record as the first paralysed man in the world to climb more than 1,000 stairs.

He scaled a 225-metre skyscraper – dubbed The Cheesegrater – in London, climbing a total of 1,444 steps over 54 floors.

To donate to Simon’s cause, see here.