Parents must be included in changes to education system

Across Australia, schools, tertiary institutions and businesses are leading dramatic changes to the education system.

Following extended periods of remote learning, and through processes such as the Australian Curriculum review and efforts by universities and schools, how students are assessed – and why – is being examined. But parents are often the last to know about these changes, and as educators our role is to support them. 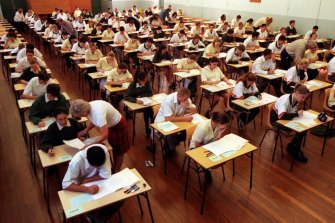 Students should not be under undue pressure to perform in exams.

The University of Melbourne’s New Metrics for Success partnership connects schools across Australia with academics and industry to create robust, validated assessments for skills beyond those ordinarily valued in education. Aspects such as “character”, “connectedness” and “ethics” – considered vital 21st-century skills – are being mapped out and tested for inclusion in learner profiles, which show the full picture of a student beyond the traditional school benchmarks of curriculum knowledge.

The university’s work mirrors other efforts across Australia, including the South Australian Certificate of Education’s learner profiles, which will be accepted alongside the ATAR, and Big Picture Education Australia’s International Big Picture Learning Credential, which supplants the ATAR. Even the Australian Curriculum, which has come under fire in the past for its bloated and outdated curriculum, has been open to public review, with parents and community encouraged to give their opinions ready for updates in early 2022.

But many principals and school leaders still experience pushback from parents when they try to shift away from traditional pathways. The Education Council’s 2020 report Looking to the Future, with research from youth non-profit Year 13, shows students seek career and pathway advice from parents, friends and online searches before careers advisers and schools.

Many parents’ concerns about senior education are still dominated by the narrative of the ATAR, and some are opposed to efforts by schools that are perceived to have a negative impact on VCE and HSC results. Yet the same report highlights that as long ago as 2014, only 31 per cent of tertiary entrants nationwide were selected based on their ATAR.

Shifting the narrative of education away from outdated ideas about assessment, knowledge and the dominance of the ATAR is complex work.

“Changing the grammar of education,” as the New Metrics project puts it, is not possible without the support and understanding of the parent community. Giving parents access to the curriculum review – including the updated general capabilities, which reflect many of the skills in the various learner profiles – is a good start. But schools and universities alike should be held accountable for perpetuating the ATAR myth, and information to parents needs to be made clear.

Until parents, teachers and school and tertiary leaders communicate effectively about processes such as the ATAR and the importance of more comprehensive learner profiles, the Australian education system will be stuck in a vicious cycle where students are put under undue pressure to perform. For their sake, it’s time we had that conversation.

Leon Furze is director of learning and teaching at Monivae College and a consultant at the University of Melbourne.

Be, ch, in, included, must, parents
You may also like: