Paul Pelosi ‘attacker’ wanted to ‘hold Nancy hostage and break her kneecaps’ as a ‘warning to other Democrats’: FBI charges David DePape and releases shocking new details – as report suggests he is in US illegally

David DePape, the man accused of breaking into the Pelosi’s home and leaving Paul Pelosi in critical condition, stated that he wanted to hold the House speaker hostage and ‘break her kneecaps’ if she lied to him, according to the FBI.

The suspect allegedly had zip ties with him when he broke into the couple’s San Francisco home – and was calling out ‘Where’s Nancy?’

DePape on Monday was charged with assault and attempted kidnapping by the Department of Justice.

The suspect, who is now in custody, is expected to appear in court this week on separate state charges. San Francisco police said DePape would be arraigned on charges of attempted homicide, first-degree burglary, assault with a deadly weapon, aggravated battery with serious bodily injury, elder abuse, threatening a public official, or family member, among others.

Fox News reports that DePape had been living in the U.S. illegally as a ‘longtime’ visa overstay.

Paul Pelosi, one of two people home at the time of the incident, called the police who arrived two minutes later to find the 82-year-old and DePape, 42, struggling over a hammer, according to a Department of Justice press release.

Officers told the men to drop the hammer. DePape then gained control of it and swung at Pelosi’s head, before he was arrested as Pelosi lay unconscious on the ground, San Francisco FBI special agent Stephanie Minor wrote in a request for a federal criminal complaint and arrest warrant. 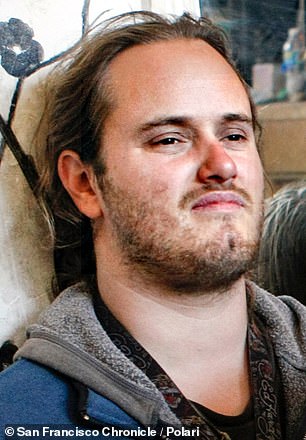 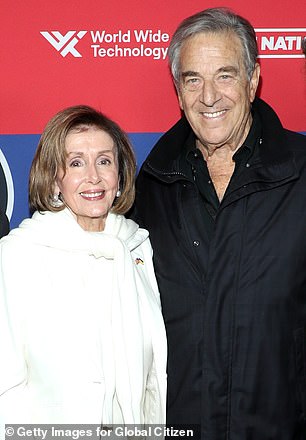 DePape, 42. is accused of breaking into Pelosi’s $6million home and attacking Paul Pelosi, 82, with a hammer as he shouted: ‘Where’s Nancy?’

Pelosi had been asleep when DePape entered his bedroom and demanded to talk to ‘Nancy.’

Pelosi told the intruder his wife was not there and would not be there for several days, and DePape said he would wait. Pelosi was somehow able to get into the bathroom while he called 911.

DePape was listening in on the phone call, and knew police were going to arrive, according to FBI interrogators, but ‘explained that he did not leave after Pelosi’s call to 9-1-1 because, much like the American founding fathers with the British, he was fighting against tyranny without the option of surrender.’

DePape told investigators he wanted to hold Nancy Pelosi captive and talk to her. He said that if the speaker told ‘the truth’ he would let her go, and if she ‘lied’ he would ‘break her kneecaps.’

‘She would then have to be wheeled into Congress, which would show other Members of Congress there were consequences to actions,’ he explained.

DePape also explained that he broke into the house through a glass door using the hammer.

Following his attack on Pelosi, DePape has been accused by his daughter of sexually assaulting his three children when they were kids.

The nudist longtime ex-partner of DePape  revealed in an interview from jail that he had been ‘mentally ill for a long time’ and had paranoid delusions.

Oxane ‘Gypsy’ Taub, 53, who was convicted in 2021 for trying to kidnap a 14-year-old boy, is also a longtime nudist activist. She says during her two decades with DePape says she saw him transform following a disappearance of more than a year.

‘He came back in very bad shape. He thought he was Jesus. He was constantly paranoid, thinking people were after him,’ Taub told Bay area affiliate ABC 7 in a phone call from prison. ‘And it took a good year or two to get back to, you know, being halfway normal.’

‘He is mentally ill. He has been mentally ill for a long time,’ she said from the Californian Institution For Women in Corona, California, where she is serving time. The two previously lived together in Berkeley.

Taub says she first met DePape two decades ago when he had political views like her own, although the ‘hemp jewelry maker’s’ more recent postings have contain anti-semitic themes and QAnon conspiracies as well as election fraud claims.

‘Well when I met him, he was only 20 years old, and he didn’t have any experience in politics, and he was very much in alignment with my views and I’ve always been very progressive. I absolutely admire Nancy Pelosi,’ said Taub.

The couple raised two sons and a daughter, and split seven years ago, she said.

Taub described herself as the ‘ex-life partner of David DePape and the mother of his children.’

DePape was also found to have run the website frenlyfrens.com, where he discussed how he had an invisible fairy friend that sometimes appeared to him in the form of a bird and shared images of Hillary Clinton as a zombie.

During one post he even ranted about not being able to buy a fairy house with a working door.

Many of his posts were filled with tirades against Jewish people, black people, Democrats, the media and transgender people, under categories such as ‘Trannies,’ ‘Da Jewbs’ and ‘Great Reset.’

DePape created his blog just months before the attack, registering it in August.

It included a video depicting a SWAT team firing at the magical nanny.

In the months since, he filled the blog with hundreds of posts depicting anti-Semitic and dystopian images.

One such post featured the Devil kneeling and asking a caricature of a Jewish person to teach him the arts of ‘lying, deception cheating and incitement.’

Several others contained images of rotting human flesh and blood, including zombified versions of Bill Gates and Hillary Clinton as he promoted his far-right conspiracy theories.

By late August, DePape seemed to become engrossed in Twitter’s decision to ban Jordan Peterson for his posts about transgender people after the Canadian psychologist compared being transgender to ‘satanic ritual abuse.’

More recently, amid backlash to rapper Kanye West’s tweet declaring war on the Jewish people, DePape posted: ‘We are ALL the Jews’ slave race.

In just the past month alone, DePape had published hundreds of blog posts promoting far-right conspiracy theories before he allegedly broke into Pelosi’s home, the Boston Globe reports.

In recent weeks, after Kanye West faced backlash for a tweet declaring war on the Jews, DePape shared his own anti-Semitic views on his blog

DePape was also active on 4chan, positing memes and debating other anonymous users about his beliefs.

In an October 24 post on the website, DePape complained he was being targeted by law enforcement officials he described as ‘paid shills’ trying to manipulate the message board.

‘I would come in and lay out the facts, and so all the paid shills would jump on me,’ he wrote. ‘To try and suppress it.’

DePape would also share some photos from a construction site he worked at, one highlighting a jackhammer with the number 33 on it, an apparent reference to a conspiracy theory about Free Masons and world domination.

But other posts on his blog seemed to be more personal, offering a glance into his delusions.

DePape wrote in recent months how he was becoming suicidal as his relationship with Oxane ‘Gypsy’ Taub, 53, was falling apart. 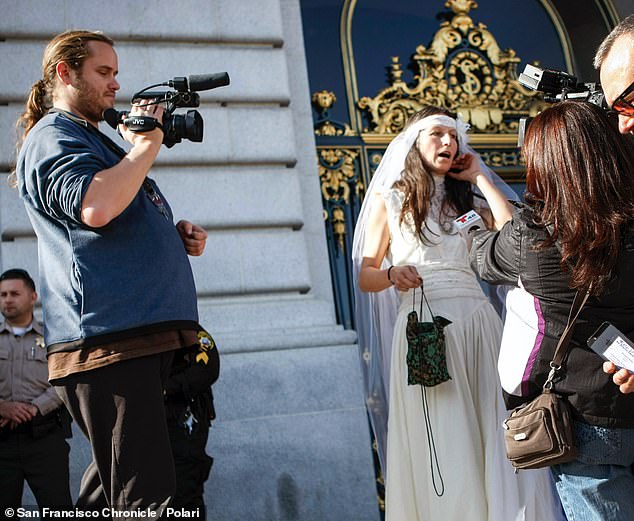 Taub (right, pictured with DePape in 2013) was accused of sending messages to a former friend of her son, telling the minor that she wanted to date him and trying to lure him to meet with her secretly

‘I was extremely suicidal,’ he posted four days before the attack, writing in an apparent letter to Inti Gonzalez, who has identified DePape as her father: ‘Mentally I would beg you guys daily to let me kill myself.’