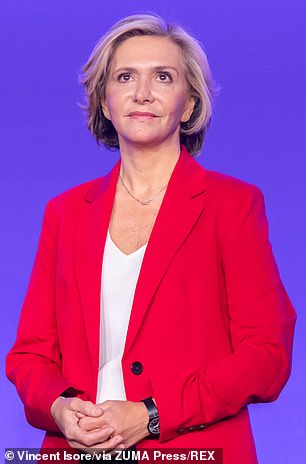 Valerie Pecresse, who has described herself as ‘one-third Thatcher, two-thirds Merkel’, has won the French conservative Les Republicains ticket for the 2022 presidential election

But Valerie Pecresse, who has described herself as ‘one-third Thatcher, two-thirds Merkel’, currently appears to stand little chance of making it to a second-round runoff, let alone winning the election.

Opinion polls have so far shown the 54-year-old head of the Paris Ile-de-France region scoring about 11% of the votes at best in next April’s election.

With nearly 61% of the votes in a runoff, Pecresse beat right-winger Eric Ciotti for the LR ticket, the party said after a primary that was a test of whether it would remain anchored in its centre-right tradition or lurch to the right.

‘We are going to restore France’s pride and protect the French,’ Pecresse said at the party’s headquarters shortly after the results were announced.

Pecresse can potentially appeal to the centre-right voters Macron very much depends on, but will have to seek support from more conservative voters also courted by right-wing candidates.

The unexpected candidacy of hard-right commentator Eric Zemmour has overturned the conventional wisdom that the presidential election will be a rerun of the 2017 duel between Macron and the far-right National Rally’s Marine Le Pen.

Though more moderate than Ciotti, Pecresse and her rivals for the LR ticket all drifted further to the right on immigration and on law and order.

She campaigned on promises to halve the number of residence permits for non-EU migrants, stiffen judicial sentences in tough neighbourhoods where police are under pressure, and ban women accompanying their children on school trips from wearing a Muslim headscarf.

‘I feel the anger of people who feel impotent in the face of violence and the rise of Islamist separatism, who feel their values and lifestyle are threatened by uncontrolled immigration,’ she said.

The former budget minister and government spokesperson under Nicolas Sarkozy will struggle to differentiate herself from Macron’s pro-business, low-tax stance on the economic front.

She has said she would end the 35-hour work-week, raise the retirement age to 65, cut 200,000 public sector jobs and build more nuclear reactors.

While the centre-right has ruled France for much of its post-war history, it has struggled in recent years, losing voters both to Macron, who has occupied much of its territory, and to the far right.

Opinion polls have so far consistently indicated that Macron, who has not yet officially declared his candidacy, will win a second mandate. France has never had a woman president.