People-smugglers charging migrants £17k to sneak into UK on yachts

People-smugglers charging migrants £17,000 to sneak into the UK via the English Channel and North Sea on luxury yachts

Ruthless people-smugglers are sneaking Albanian migrants into the UK on luxury yachts as part of a ‘premium’ trafficking service, The Mail on Sunday can reveal.

Posing as a migrant, an undercover MoS journalist last week contacted Albanian crime bosses who claim to be regularly using yachts to smuggle people across the English Channel and North Sea.

The MoS revealed last weekend how a leaked military intelligence report showed four in ten migrants crossing the Channel in small boats this summer are from Albania – a member of Nato where there has not been a war for 25 years.

Now our investigation has exposed how people-smugglers are using TikTok to target Albanian migrants, cynically urging them not to risk their lives on packed inflatable boats, but instead opt for ‘safe’ passage by luxury yacht.

Astonishingly, detectives in the Netherlands say people smugglers have been caught using yachts to target the UK along a stretch of more than 100 miles of Dutch coastline from Vlissingen in the south to Den Helder in the north.

Most of the passengers on intercepted vessels were Albanian nationals, the Royal Netherlands Marechaussee, a national police force, said last night. 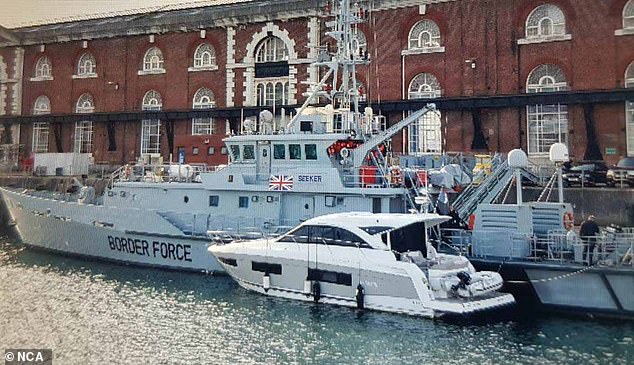 People-traffickers are sneaking migrants onto luxury yachts for £17,000. Pictured: A 46 foot motor cruiser was intercepted by the Border Force cutter Seeker and a coastguard helicopter on November 6 and escorted into Portsmouth.

The MoS last week identified three people-smugglers using TikTok to sell passage on yachts to the UK from harbours in France, Belgium and Holland. One of the traffickers posted pictures of luxury vessels, including one that appeared to be near the White Cliffs of Dover. The advertisement, written in Albanian, offered a ‘journey to England every two days’.

When quizzed by a reporter posing as an Albanian migrant on Wednesday, the trafficker, offering passage for £16,000, said there was availability on a yacht in four days’ time and asked the reporter to meet the gang in Calais.

He stressed that he was offering a ‘secure journey’, adding: ‘We are not in this to destroy lives. In the yacht we put 15 people.’

Another smuggler offered a place on a yacht for £17,000 per person and told our reporter to travel to Brussels, where he said migrants were due to gather yesterday.

It is feared some Albanian migrants trafficked into the UK are forced to work as ‘slaves’ for organised criminals. Albanians represent the highest percentage of foreign nationals in custody, with more than 1,300 in England and Wales.

A spokesperson for TikTok said it had banned the accounts.