A 25-year-old man accused of murdering his friend by stabbing him 14 times in the chest and abdomen while high on LSD has appeared in court to face the first day of his trial.

Nathan Ihaka Cherrington was 23 years old when he allegedly fatally stabbed Gus Kennedy, 24, in a drug-fuelled rage at his unit at Clyo Way, Kallaroo, on January 17 last year. 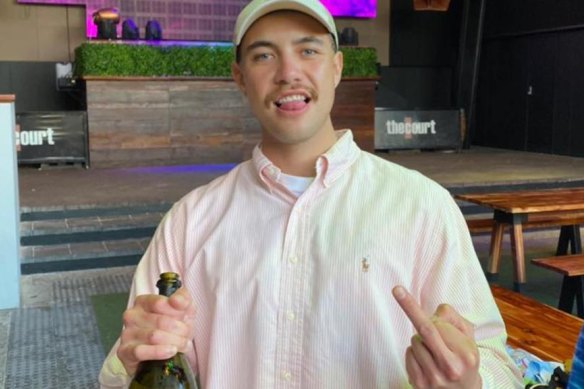 Nathan Cherrington is accused of murdering his friend. Credit:Facebook

Cherrington knocked on a neighbour’s door at 2.46am, asking them to call triple zero. He allegedly told the three men living there “I fucked up, I’m going to jail, I think he’s dead, I’m tripping out.”

State prosector Michael Cvetkoski said Cherrington was experiencing a “bad trip” when he attacked Kennedy, but that the attack had been “purposeful and conscious.”

He said the pair worked together at a tree lopping business, but were also close outside of work. Cherrington had arranged to pick up the LSD and the pair went together to get the drugs on January 16 before heading to Cherrington’s home, also picking up fish and chips on the way.

Then at around 11.50pm, one of their neighbours heard yelling so “out of control” she could hear it through headphones. She recorded what she heard on her phone, with one played in court on Wednesday morning.

In the recording, a man yelling can clearly be heard. The neighbour also told police she could hear another man trying to defuse the situation, saying “calm down bro.”

After Cherrington told neighbours to call police, he then allegedly told an operator over the phone he had been walking around aimlessly for about an hour and that he did not know if a weapon had been used.

Police arrived and discovered Kennedy lying on his back on a couch in Cherrington’s home. Cvetkoski said there had been a clear sign of struggle, with furniture and other items strewn around the room.

Red and black jumper cables were found on Kennedy’s chest, and a knife was found resting on the couch, alongside a watch belonging to Kennedy which had broken.

Cvetkoski said the blood stains on the socks matched the stain on the arm of the couch, and this was evidence Cherrington stood on the arm to stab Kennedy.

A note reading “We have. I’m so sorry Gus. Love. F—” was also found at the address.

St John were called to the scene and assessed Cherrington, finding he had an injured right hand with a broken ring finger which was stained with blood.

He allegedly told a paramedic “I had a fight with my mate and I think I killed him”. He later participated in an interview at Joondalup Police Station, where Cvetkoski said he was evasive.

He said his client woke up to find his friend dead and the unit a mess, and that it was “hard to imagine a more confronting and shocking scene.”

Freitag said Cherrington had tried to piece everything together and came to the conclusion he had killed his friend based on what he saw when he woke up, with LSD still “sloshing around in his blood stream”.

He said if his client had killed Kennedy there had been no intent behind it because “if you don’t know what’s real and what’s not how do you form intention.”

Freitag said there was also a chance Cherrington did not stab Kennedy at all, and that Kennedy had inflicted the injuries on himself.

He said while it sounded impossible for someone to stab themselves 14 times, that was not the case when someone had a significant amount of LSD in their system and experienced paranoia or psychosis and were attempting to escape something they imagined as real and a threat.

He also said that while the state suggested when police interviewed him Cherrington was evasive;“I’m going to suggest that is a cynical view… You’ll see someone who is traumatised and doing his best in really shocking circumstances.”