Phil Collins’ ex-wife Orianne Cevey, 49, shares bitter NYE Instagram post claiming COVID drove her to marry escort, 34, as she slams ‘the venom of my enemies’ and says her only friends are her dogs

Phil Collins’ ex-wife Orianne Cevey has told of her ‘catastrophic’ year and vowed: ‘the venom of my enemies will not make me give up.’

Orianne, 49, a jewelry designer, who now lives in Bay Harbour, Florida, has posted a somber reflection on New Year’s Eve in which she says that her only companions this year have been her two dogs Billy and Tony.

She adds that her third husband, musician Thomas Bates was only ever with her for the money and lifestyle. ‘He was only there out of self interest and decided to give me a hard time. What trials and betrayals!’ she exclaims.

She divorced Bates, 34, this year after an extraordinary romance that kicked off during the pandemic, but claimed it was mostly fueled by the ‘pressures’ of COVID. 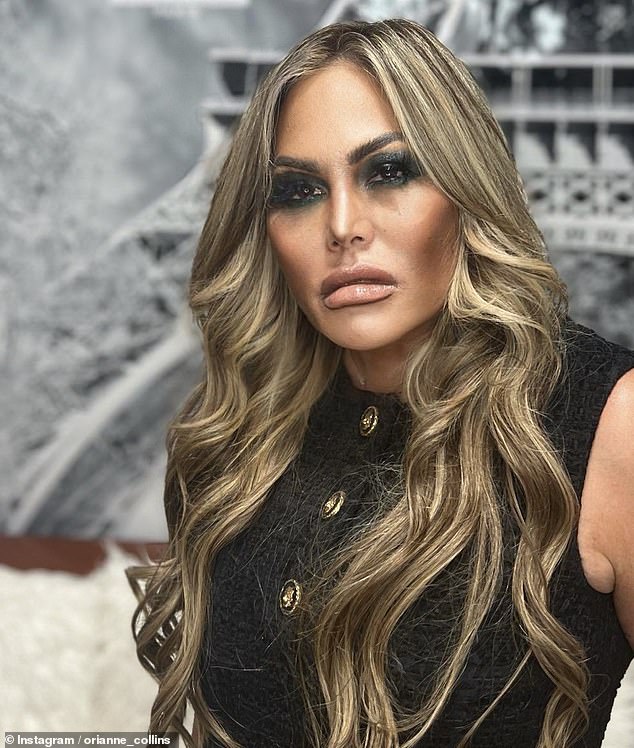 Orianne Cevey, Phil Collins’ ex-wife, called 2022 a ‘catastrophic’ year where her dogs are her only friends and that she would not lose to the ‘venom’ of her foes 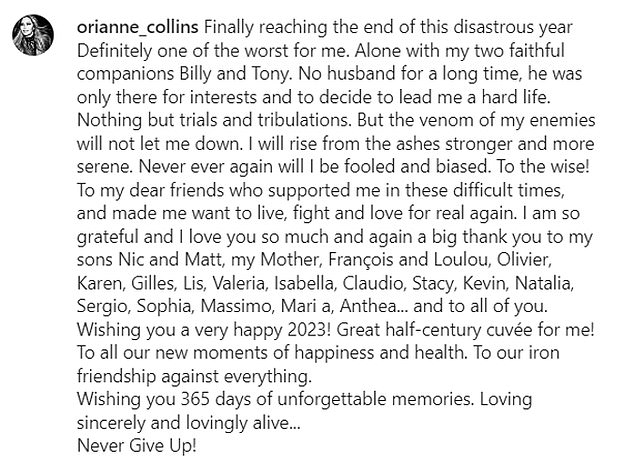 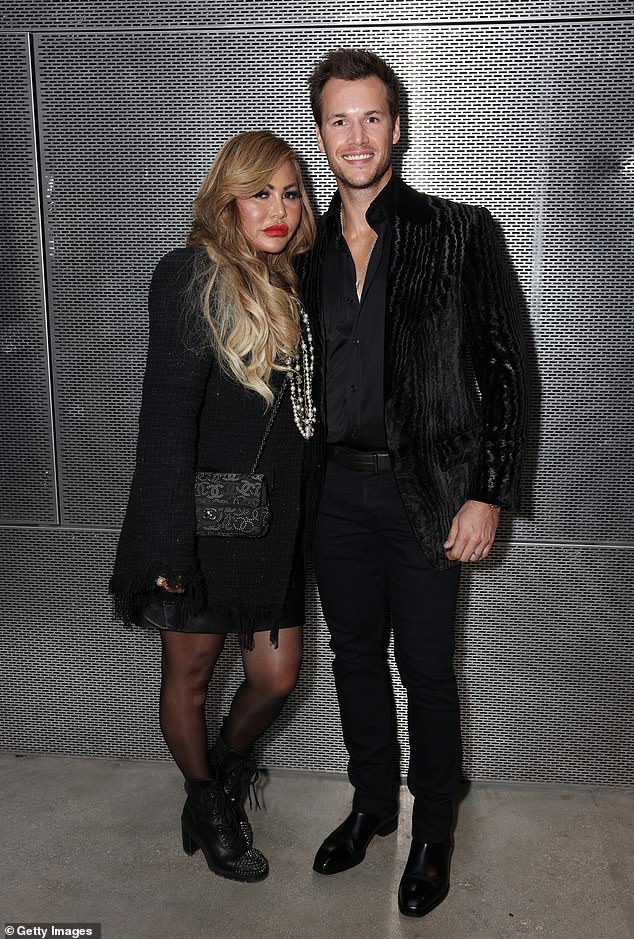 Cevey claims she only married Thomas Bates (right) in 2020, who she met via an escort service, due to the ‘pressures’ of the COVID pandemic 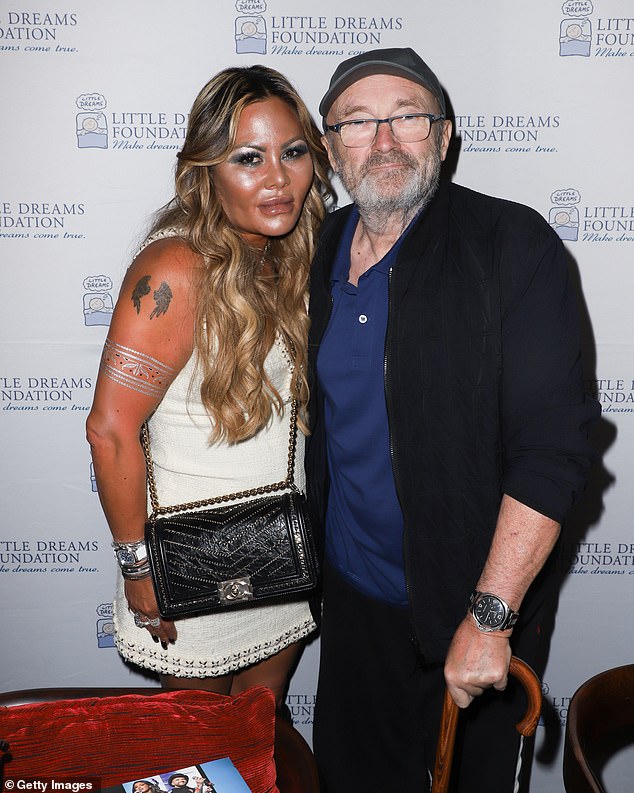 Cevey and Phil Collins (right) finalized their divorce in 2008 in what was the largest in UK showbiz history at $30 million. The two are pictured posing together in 2018 following a brief reunion, but the couple split, again, in 2020

They met – according to him – via an escort service in 2020 and were secretly married in Las Vegas before settling in the house in Miami which Phil Collins had bought for himself and Orianne.

She lost a legal battle to keep the house and the romance with Bates ended in December last year.

Orianne gave a statement in legal papers where she suggested that she had embarked on the romance because of the pressures of the pandemic. ‘I believe the emotional stress of the COVID quarantine caused me to act in ways to do things that were out of character,’ she said.

During the spring of this year she also lost custody of her son by her second husband, Charles Mejjati.

The boy is not mentioned in a lengthy Instagram post in which she gives a ‘big thank you to my sons Nic and Matt’. Those are her sons with drummer Phil Collins, and she spent Christmas with them in Switzerland where Collins now lives.

Her son, then aged ten, was taken into temporary emergency custody in April after she allegedly hit him over the head because he would not give her the code to his mobile phone.

According to legal papers filed at the time after a physical confrontation with the boy ‘ then did vodka shots until she passed out.

The full message was posted in French. Orianne, who is Swiss, met Phil Collins when she was hired as a translator on his tour and the couple were married from 1999 to 2006.

Their divorce settlement was the largest in UK showbiz history at £25 million, or $30 million. 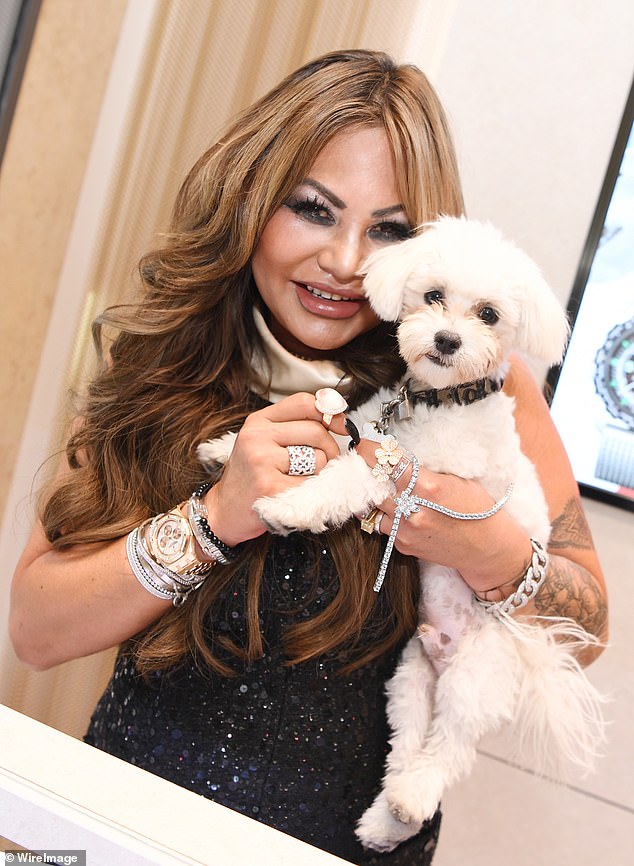 In wrapping up a ‘catastrophic’ 2022, Cevey says her only friends are her dogs. She is pictured with one of them at a jewelry showcase last year 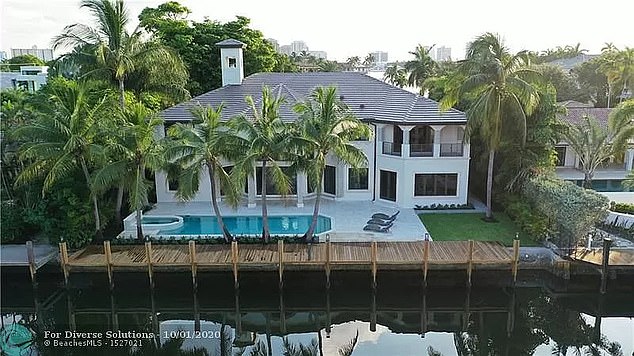 After a shocking announcement that they were together again, Cevey and Collins bought a $6million estate in Miami in 2016 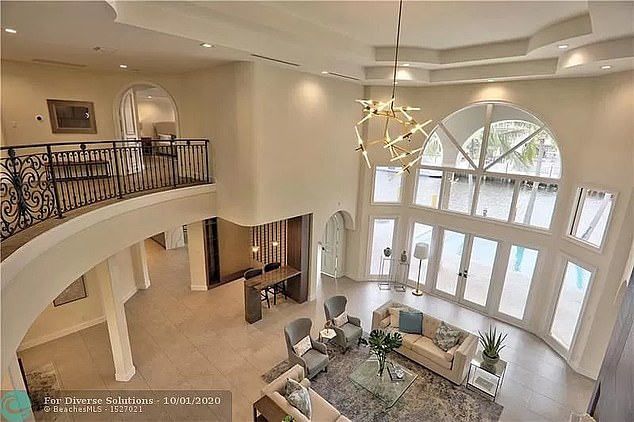 The luxury property became part of the property battle between Cevey and Bates, with her ex ultimately won it in December 2021

She and Phil, 71, astonished the world when they announced that they had found love once again in 2016 and set up home in Miami, Florida – but they split again in 2020.

Her post runs: ‘We finally come to the end of this catastrophic year. Definitely one of the worst for me. Alone with my two faithful companions Billy and Tony. No husband for a long time. He was there only out of self-interest and decided to give me a hard time. What trials and betrayals.

‘But the venom of my enemies will not make me give up. I will rise stronger and more serene from my ashes. Never again will I be fooled and tricked! I understand it all too well.

‘I salute my dear friends who supported me in these difficult times, and gave me the desire to live again, to fight and to love myself for real.

‘I am so grateful and I love you very much and again a big thank you to my sons Nic and Matt, my mother, to Francois and Loulou, to Olivier, Karen, Gilles, Lis, Valeria, Isabella, Claudio, Stacy, Kevin, Natalia, Sergio, Sophia, Massimo, Maria, Anthea and to all of you. I wish you a very Happy New Year 2023! My half century vintage!

‘To all our new moments of happiness and health. To our iron friendship which endures against everything. I wish you 365 unforgettable days. I love you sincerely and with all tenderness I embrace you. Never give up!’ 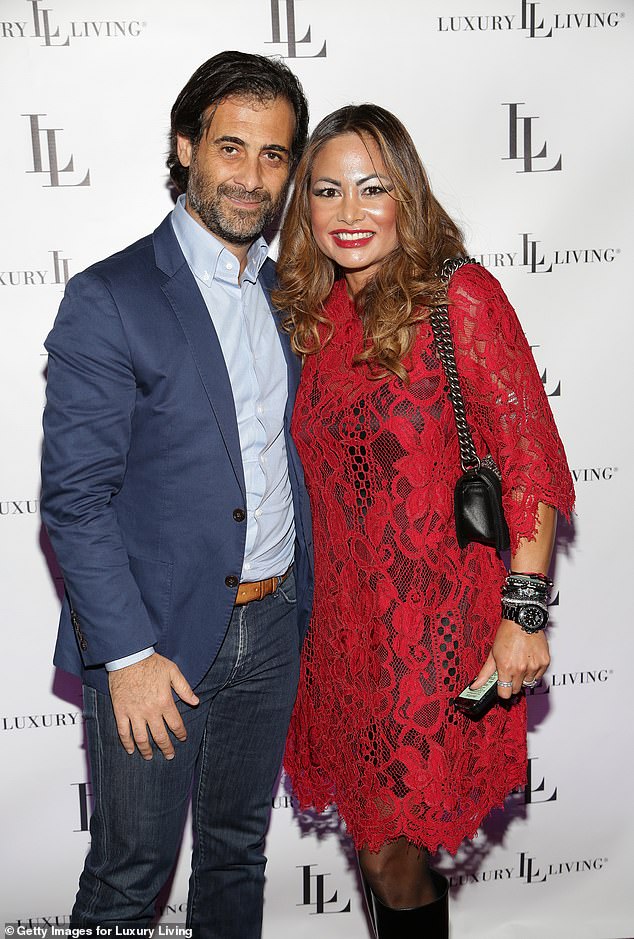 Cevey has been accused of domestic violence against the son of her second-husband, Charles Mejjati (right). The two are pictured together in 2014

In late April, Orianne was accused of battering her youngest son in an emergency protection order filed by his father, businessman Charles Mejjati.

Records filed by Mejjati on behalf of the child said that conditions with his mother were ‘toxic’ and he was granted a temporary injunction for ‘protection against domestic violence’ .

Documents claimed that Collins: ‘has committed acts of domestic violence against the minor child including, but not limited to, punching the child in the back of the head and causing the child to fall thus giving the child a concussion and hematoma.’

After one confrontation ‘the Mother [then] got drunk on vodka shots and passed out on the sofa.’

This festive season, Orianne has been in Switzerland spending time with her mother, Orawan, and a close friend, interior designer Kevin Aron Saxon, who recently divorced his husband.

She proudly posted pictures of herself with Nick and Matt, her sons by Collins. Nick, 21, is a drummer and played on the recent, final Genesis tour as Phil Collins is unable to hold a drumstick due to spinal issues and nerve damage. Matt, 18, attends a football academy in Switzerland.