Pictured: Great-grandmother, 83, who died after jumping 20ft from first floor window to escape arson attack as man arrested for murder is detained under Mental Health Act

The great-grandmother who died after jumping 20ft from the first floor of her home to escape an arson attack has been pictured today.

Tributes have been paid to Peggy Wright, 83, who was killed while trying to get out of her burning home in Birmingham, West Midlands on Sunday.

She was rushed to hospital but died from her injuries. Her son, Andrew, 52, suffered severe burns and is in a stable condition.

It is alleged that a firebomb was pushed through the letterbox of her home in Lapworth Grove, Balsall Heath, sparking the blaze.

A 46-year-old man who was arrested on suspicion of murder was today detained under the Mental Health following an assessment by experts.

In a tribute, her family said: ‘Peggy was a much-loved and respected member of her local community over a period of many years. Tributes have been paid to great-grandmother Peggy Wright, who died after trying to escape an arson attack at her home in Balsall Heath, Birmingham 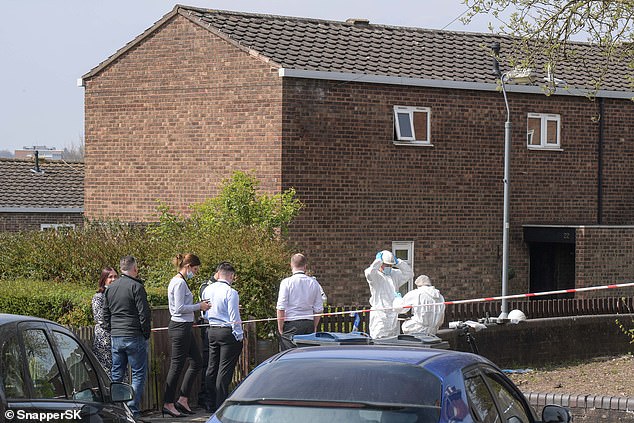 Emergency services attended the scene of the incident in Balsall Heath, Birmingham

‘A mother, sister, grandmother and great-grandmother, she was devoted to her family but always had time to show compassion and understanding to others.

‘Her loss following the sudden and devastating events of the weekend has left her loved ones and many friends beyond grief, in a state of bewilderment and has created a void in her family that can never be filled.

‘The family would like to express sincere thanks and appreciation for the many good wishes and messages of support, but would respectfully request some privacy at this sad and most difficult time.’

Roslin Henry, 89, said Peggy had lived opposite her home for four decades. She said: ‘All I can say is she was always a really nice woman to me.

‘Both of us used to help each other out. We would meet at the wall for a chat. She just lived with her son, Andrew. He’s in hospital with very bad burns.

‘I just can’t understand how this could happen. I just feel so much pain in my heart. She was such a nice woman.’

Another neighbour added: ‘We were at home inside when the fire brigade came. She’s tried to get out of the windows out the back.

‘She was a really nice lady. She didn’t deserve this at all. She was like Peggy from EastEnders – full of life and always there for everyone. Peggy from Balsall Heath.’ 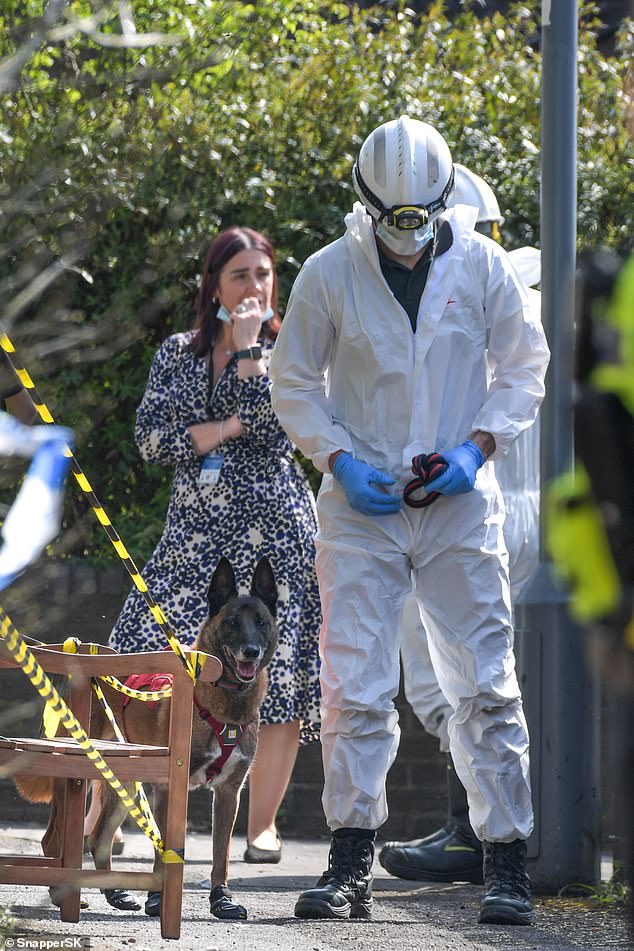 The fire dog, Kai, was brought in to help to trace the seat of the fire and any accelerants used

Mrs Wright, who had breathing difficulties, had lived in Lapworth Grove for more than four decades after moving from London.

A neighbour, Liz, 54, said: ‘Peggy was from London. She had a husky voice and you would hear her laugh a mile off.

‘I’ve known her for 40 years – I’m gutted. We’ve all grown up with her. It’s heartbreaking. We are gutted.

‘She was a lovely lady. She won’t be forgotten around here. She will be missed.’

DI Wes Martin, from West Midlands Police homicide team, said: ‘This is a really tragic case where a woman has sadly died after her own home, a place that should be safe, was set on fire.’

The end-terrace house was cordoned off to allow officers and firefighters to conduct a full forensic investigation of the scene.

Witnesses say they heard the Mrs Wright ‘screaming for dear life’ as the property became engulfed in flames.

One neighbour said: ‘I was hanging the washing out and thought someone’s TV was on because I could hear a commotion and shouting. 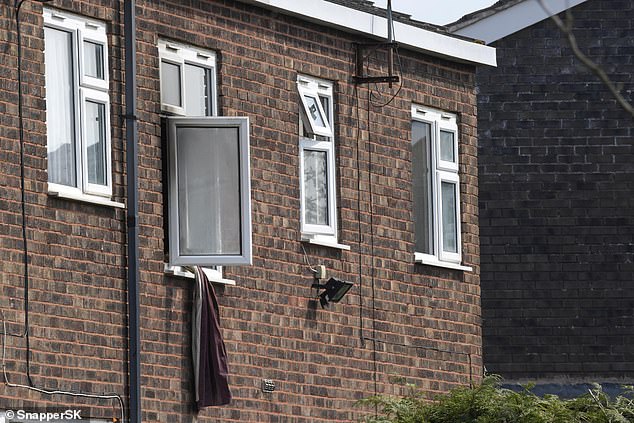 Mrs Wright was heard ‘screaming for dear life’ before she jumped from the window after her home in Balsall Heath, Birmingham was torched before 9.30am yesterday

‘It sounded like someone was screaming for dear life. When I heard sirens and saw smoke coming from the house I knew something awful had happened.

‘I didn’t know the woman who lived at the house but another neighbour said they believed a man lived there with his old mum.

‘It’s appalling to think that someone has tried to burn them to death in their own home. What kind of a person would do that?’

Rescue teams including two ambulances, paramedics and an air ambulance scrambled to the scene within minutes of neighbours dialling 999.

A West Midlands Ambulance Service spokesperson said: ‘We were called to reports of a property fire on Lapworth Grove at 9.27am on Sunday.

‘On arrival we discovered two patients, a man and a woman.

‘The woman was found to have suffered serious injuries and received specialist trauma care before being taken to Queen Elizabeth Hospital by land ambulance.

‘The doctor from the air ambulance travelled with the patient to help continue treatment en route to hospital.

‘The man was treated for serious injuries before being taken to the same hospital, also by land ambulance.’