Holidaymakers have been warned to prepare for major delays across Melbourne’s road network starting Monday night and for the following 10 days while maintenance crews work on the West Gate Bridge.

Delays of more than 90 minutes are expected on the West Gate Freeway between the city and the bridge, as well as on city-bound lanes of the Monash Freeway, the Domain Tunnel and at the Bolte Bridge/CityLink. 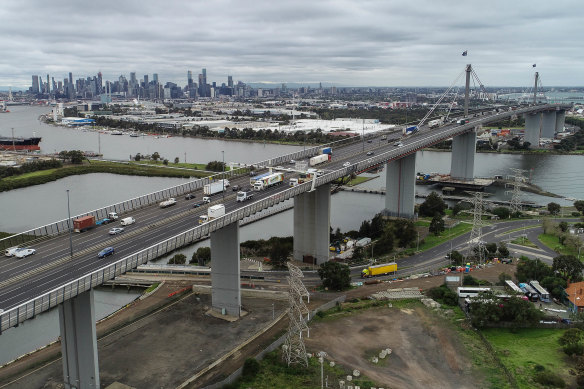 Four of the five outbound lanes will be closed on the West Gate Tunnel until January 4. Credit:Joe Armao

VicRoads has advised motorists to avoid those roads while four of the bridge’s five outbound lanes are shut from 9pm Boxing Day until 5am on January 4. The traffic snarl is expected to extend to surrounding roads in the CBD, Southbank, Docklands, South Melbourne and South Yarra.

“Motorists are advised to plan ahead and to detour early with delays expected across the network,” VicRoads said in a statement.

Motorists heading to Melbourne Airport will face lengthy delays if they take the Monash and Domain Tunnel to the Bolte Bridge and CityLink. Instead, VicRoads said they should drive to the Tullamarine Freeway through the eastern and northern suburbs via Mt Alexander Road, Brunswick Road or Bell Street.

Anyone escaping west to the Surf Coast, Great Ocean Road or Bellarine Peninsula should also drive north to Alexandra Parade, Racecourse Road and Geelong Road to get to the Princes Freeway, or use Ballarat Road to the Western Freeway.

The Department of Transport also urged Melburnians travelling into their city centre from the western and eastern suburbs to consider using public transport to avoid the heavily congested roads.

Train travel will then be disrupted for two weeks from January 2, while the City Loop closes to install new fire safety systems. Flagstaff, Melbourne Central and Parliament stations will be shut and trains will only stop at Flinders Street and Southern Cross.

Elsewhere on the train network, buses will replace trains between Parliament and Heidelberg on the Hurstbridge Line on weekdays from 8.30pm from January 2 to 13, and between Camberwell and Alamein on the Alamein line from January 2 to 15. Cranbourne, Pakenham, Frankston and Stony Point line services will be replaced with buses at various times through most of January.

Crews working on the West Gate Bridge will replace part of its waterproof membrane, resurface some sections and renew line markings as part of the annual work.

And traffic pain in the western suburbs will continue when Footscray Road closes on January 11 until early April for the West Gate Tunnel construction works.

Motorists will need to detour via Dynon Road and allow 15 minutes longer to get there. And one more outbound lane on the West Gate Freeway and the outbound Williamstown Road entry ramp will close from January 11 to February 27.