A meeting between federal and state leaders to strike a deal on power prices has been delayed after Prime Minster Anthony Albanese came down with COVID late on Monday, dragging out talks when NSW and QLD are warning against any hit to at least $9 billion in combined annual coal royalties.

Albanese returned a positive test for COVID-19 on Monday evening, shelving plans for him to discuss the energy strategy with state and territory leaders at a dinner at Kirribilli House on Tuesday and forcing a delay to the national cabinet meeting scheduled for Wednesday.

It is not known when the meeting will be rescheduled, throwing into doubt the likelihood that a solution to soaring power prices could be signed off before Christmas.

Earlier on Monday, he committed to discussing the issue of reimbursement with premiers while stepping up pressure on the leaders to help broker a solution to the energy crisis, as NSW and Queensland repeated their demands for compensation to be included in any proposal to cap coal prices. 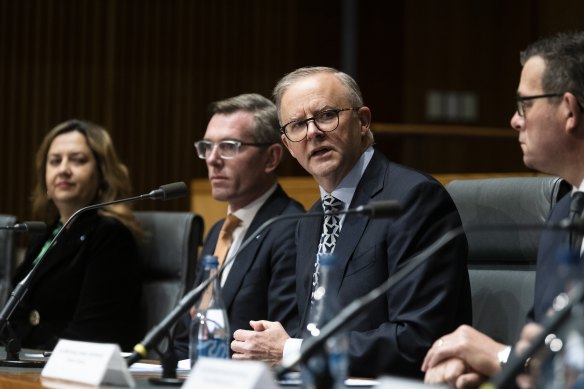 Instead, the prime minister intends to work while isolating at Kirribilli House, however those around him know from his previous bout of COVID in April that it is a serious illness and it may disrupt his ability to work.

Albanese confirmed the result in a statement on Monday afternoon and said he would continue to work from home.

“This afternoon I had a routine PCR test which has returned a positive result for COVID-19,” he said.

“I will be isolating and will continue to work from home. I encourage anyone who is unwell to test and to take any extra precautions to keep their families and neighbours well.”

The prime minister had been due to host premiers and territory leaders at Kirribilli House for a dinner on Tuesday night before a series of briefings and the national cabinet meeting.

It is the second time he has contracted the virus after being forced to isolate for a week during the federal election campaign in April.

Albanese received his fourth vaccination in Sydney in July before he travelled to the Pacific Leaders’ Forum.

NSW Treasurer Matt Kean said the state received $3.6 billion in coal royalties last financial year and this year “will be much higher given spot prices”.

The latest QLD state budget showed coal royalties are forecast to hit $5.480 billion this financial year, after rising astronomically from $1.74 billion in 20-21 to an estimated $7.29 billion in 21-22.

NSW Premier Dominic Perrottet on Monday repeated his position that the taxpayers of NSW would need to be compensated for a plan that involved the capping of the coal price.

“My position has been incredibly clear, we want to work with the federal government to put downward pressure on energy prices. At the same time, though, if there is a situation where caps are in the place that leads to compensation, then I don’t want to see NSW taxpayers having to foot that bill,” he said.

Queensland Premier Annastacia Palaszczuk also vowed to “stick to her guns” and demand compensation for the state out of any national energy shakeup.

She declined to say how much compensation the state would need, or in what form, but said she would insist no Queenslander be left worse off.

“Queenslanders own our assets,” Palaszczuk said. “Some of those profits are going back to Queenslanders in terms of direct assistance for our households, to the tune in the last quarter of $175.

“There would have to be adequate compensation. As I said in the parliament last week, and I’ve stuck to my guns in relation to this, we would have to be very, very convinced that no Queenslander would be worse off.”

Palaszczuk reiterated Queensland was the “energy powerhouse of the nation” and southern states could take piped Queensland gas if they wished.

In a radio interview on Monday morning, Albanese vowed to talk through the issue of compensation with state leaders but said the imperative was to find common ground.

“I don’t think that there is a premier or chief minister who will sit back and say, ‘yep, this is all okay’, for prices to continue to rise and projections which are there,” he said.

“I just think that what you’ll see is some common positions come out over coming weeks because we need to act on this.”

Other states, including Victoria, are taking a dim view to Queensland’s argument that coal and gas profits have allowed the Queensland government to pay for state-based cost of living measures, pointing out that this compensation is coming at the expense of higher prices faced by consumers around the country.

Victoria also accused Australia’s three big gas exporters of profiteering off Russia’s invasion of Ukraine, and ramped up demands for an agreement this week to drive down energy bills for consumers and businesses.

Victoria Premier Daniel Andrews said it was “just so wrong” that big gas companies were essentially profiting from a war on the other side of the world.

“Their cost of production hasn’t gone up $1, and yet they want Victorians and people in every part of our country to be paying European prices because of a war in Ukraine,” Andrews said. “That’s a terrible thing.”

Victoria’s energy minister Lily D’Ambrosio said an agreement was needed this week to stop “price gouging” – a term describing a situation where a seller exploits a disaster by driving up prices to an unconscionable level.

In the absence of a national agreement, the Victorian government has so far been reluctant to match its tough rhetoric with a specific proposal to drive down prices. But D’Ambrosio said in a statement all options were on the table, including capping prices and setting up a “robust” domestic gas reserve, which would give Australian gas users first dibs ahead of international customers.