A woman was pushed to the ground then sexually assaulted as she walked her dog through a nature reserve, Greater Manchester Police have revealed. Police patrols in the Wigan Flashes area have been stepped up as a result.

The woman, said by police to be aged in her 50s, was out walking her dog through the nature reserve on Saturday morning when she was approached by a man. He’s said to have pushed her to the ground then sexually assaulted her, before leaving the scene with the victim’s mobile phone.

He’s been described as aged around 19 to 20 with short brown/ginger hair. The attacker is also said to have been wearing a navy blue bomber jacket. 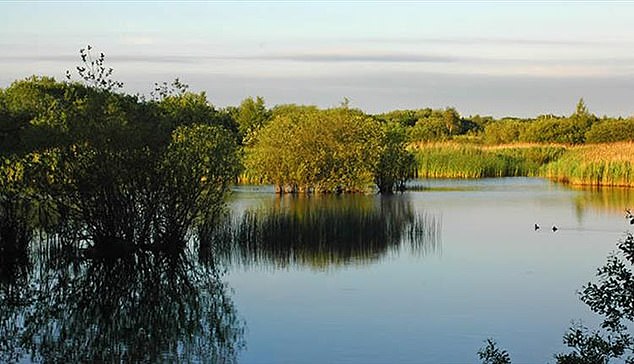 A woman in her 50s was sexually assaulted while walking her dog through the Wigan Flashes nature reserve yesterday morning. Greater Manchester Police are hunting a man aged 19 or 20 with brown or ginger hair

Police have issued an appeal for witnesses and confirmed an investigation was underway. The attack happened between 7.30am and 8.30am.

Police said they believe it to have been an ‘isolated incident’. On Facebook, GMP Wigan West said on Saturday night: ‘Police appeal for information following report of a sexual assault at Wigan nature reserve.

‘Some time between 7.30am-8am this morning, it has been reported to police that a woman in her 50s was walking her dog through Wigan Flash Nature Reserve when she was approached by an unknown male who has then pushed her to the ground before sexually assaulting the victim.

‘The offender then left the scene with the victims mobile phone. The offender has been described as a white male aged around 19-20, 5ft 7ins tall, of slim build with short brown/gingery hair combed back and wearing a blue T-shirt and a dark navy blue bomber jacket.’

PC Nathan Meadows, of GMPs Wigan district, said: ‘We understand that this incident will cause concern but we believe it to be an isolated incident and are working hard to locate the male responsible.

‘We will also have extra patrols in the area from today onwards.