Federal police have been told a key witness in a major criminal investigation and the looming Ben Roberts-Smith defamation trial felt intimidated after being followed by a photographer outside his home.

The witness is assisting police and is also expected to allege in the Federal Court in June that Mr Roberts-Smith tried to intimidate people who were to give evidence to a war crimes inquiry about the ex-soldier’s conduct in Afghanistan. 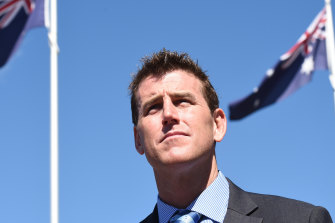 Ben Roberts-Smith launched defamation action against The Age and The Sydney Morning Herald in 2018.Credit:AAP

Mr Roberts-Smith, a highly decorated former SAS veteran, is suing The Age and The Sydney Morning Herald over allegations he committed murder and was involved in illegal executions in Afghanistan. He denies the allegations and says they are defamatory because they portray him as a criminal.

The news outlets will defend the claim on a truth defence in a Federal Court trial starting on June 7. The war crimes allegations are separately the subject of a long-running federal police probe. The AFP has also recently launched what it has called a “priority” investigation into allegations Mr Roberts-Smith intimidated witnesses in 2018.

On Thursday morning, the AFP was told that a key witness in this intimidation inquiry was being followed by a person taking photos of him outside his home.

Also on Thursday, Nine, the owner of The Age and the Herald, received questions from Sydney’s Daily Telegraph newspaper detailing several false claims about the witness.

A Nine spokesman said: “Every aspect of these questions is simply false.”

The assertions in the Murdoch newspaper’s questions were wrong, the spokesman said, urging the newspaper to question the motives of its source.

The inquiry into the conduct of the Australian military in Afghanistan found last year that special forces soldiers allegedly committed up to 39 murders in the country between 2003 and 2016, and that 19 current or former soldiers should face criminal investigation.

Ben, in, police, Roberts, Witness
You may also like: