Politicians addressed hundreds of protesters on the steps of Victoria’s State Parliament on Tuesday evening before demonstrators snaked through Melbourne’s CBD once again, rallying against COVID vaccine mandates and proposed new pandemic laws.

Shadow Treasurer David Davis was first to take the podium on the steps of parliament just after 6pm. He was billed as a headline speaker on a poster shared on an encrypted messaging app used by protesters. 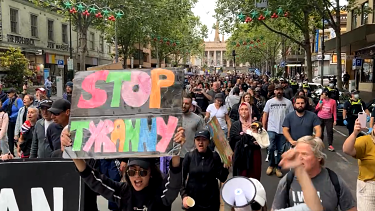 “We got the worst business outcomes and the worst jobs outcomes; more people have lost their jobs here than anywhere else in Australia.

“The harsh lockdown laws have not delivered for Victoria.

“As many of you know, I have pushed hard to see the information behind the Chief Health Officer’s orders … and [Premier Daniel] Andrews and [Chief Health Officer Brett] Sutton and the health ministers have never once … released those briefings that explain what is going on.

“I say, what on earth do they have to hide? And now, after the use of the state of emergency powers again, and again, and again, for the longest lockdown in the world, Andrews and his government want even more power.” 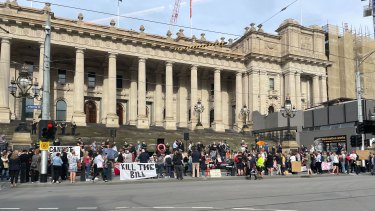 Demonstrators gathered at the steps of Parliament House on Tuesday evening.Credit:Simone Fox Koob

Protesters booed and yelled “shame” in response. About a dozen police officers stood on the steps behind the podium.

The government’s proposed pandemic legislation will replace state of emergency powers that expire on December 15, curtailing the chief health officer’s powers, giving the premier the authority to declare a pandemic and the health minister the role of making public health orders.

The new laws passed the lower house late last month, and will almost certainly be subject to crossbench amendments when they reach the upper house in a few days.

Mr Davis said anytime the state of emergency orders were extended beyond an initial short period, it should require the decision of both houses of parliament.

Liberal Democrat David Limbrick was among others who addressed the crowd.

“It’s just until we get a vaccine, it’s just schools … it’s just a curfew, it’s a few more months of lockdown, it’s just a jab – it’s your choice,” he said, and was met with protesters calls of “what choice”.

“It’s just mandatory now – you need it to keep your job, and after next week, it’s just the ability to target by race, religion, and political beliefs. It’s just a two-tiered society … [and] it’s not just.”

The crowd chanted “it’s not just” in response.

After more speakers, the hundreds of protesters marched through the CBD, with demonstrators young and old chanting “kill the bill”, “sack Dan Andrews”, “save Victoria”, and “save our children” among other slogans.

One banner held by protesters at the front of the crowd read “Sack Dan” and “make Victoria great again”. Another read “stop tyranny” and one read, “too many lies to fit on here”.

Police flanked the crowd as they marched, with dozens in front of the demonstrators, and dozens more at times running alongside the hundreds of protesters.

The protest wrapped up back at the steps of State Parliament about 8pm, with police officers shepherding demonstrators off Spring Street to maintain the traffic flow.

Victoria Police in a statement described the protest as peaceful and said they made no arrests.