Pope Francis said on Sunday the fight for women’s rights was a ‘continuous struggle’, and condemned male chauvinism as deadly for humanity and female genital mutilation as a crime that must be stopped.

Speaking to reporters on the plane returning from a four-day trip to predominantly Muslim Bahrain, he also praised women he has appointed to managerial jobs in the Vatican, saying they had improved things there.

He made no mention of campaigns to let women move on beyond that and become clergy – the pope and his predecessors have said the question of women priests is closed.

Francis was responding to a question about women protesting in Iran but turned to the topic of women’s rights in general. 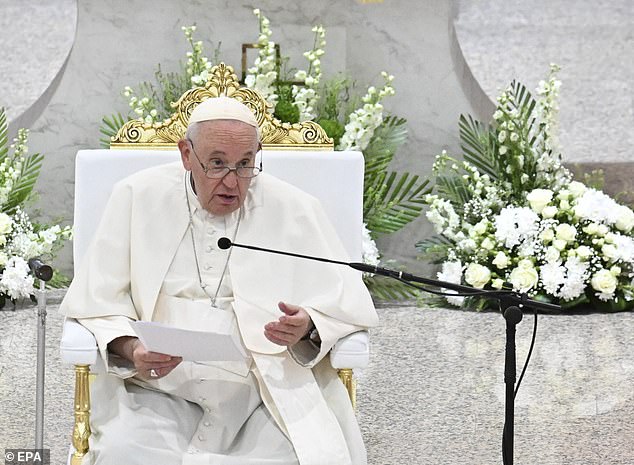 Pope Francis said on Sunday the fight for women’s rights was a ‘continuous struggle’, and condemned male chauvinism as deadly for humanity and female genital mutilation as a crime that must be stopped

‘We have to tell the truth. The struggle for women’s rights is a continuing struggle,’ he said, listing historic struggles such as the fight for the right to vote.

‘We have to continue struggling for this because women are a gift. God did not create man and then give him a lapdog to play with. He created both equal, man and woman,’ he said.

‘A society that is not capable of (allowing women to have greater roles) does not move forward,’ he added.

Francis denounced male chauvinism, acknowledging there was still too much of it around the world, including in his native Argentina. ‘This chauvinism kills humanity,’ he said.

He also condemned as a ‘criminal act’ female genital mutilation (FGM), repeating a major call he made in February on the U.N. International Day of Zero Tolerance for Female Genital Mutilation.

According to the United Nations, FGM is concentrated in about 30 countries in Africa and the Middle East but is also practiced by immigrant populations elsewhere. More than four million girls are at risk of undergoing FGM this year, the U.N. says.

He spoke of women he has appointed to managerial roles in the Vatican, mentioning by name Sister Raffaella Petrini, a nun who as the deputy governor of Vatican City is effectively the most powerful woman there.

‘I have noticed that every time a woman is given a position (of responsibility) in the Vatican, things improve,’ he said.

He also cited the impact of five women he appointed to a department that oversees Vatican finances.

‘This is a revolution (in the Vatican) because women know how the find the right way to go forward,’ he said.

Francis also has appointed women as deputy foreign minister, director of the Vatican Museums, deputy head of the Vatican Press Office, as well as four women as councillors to the Synod of Bishops, which prepares major meetings. 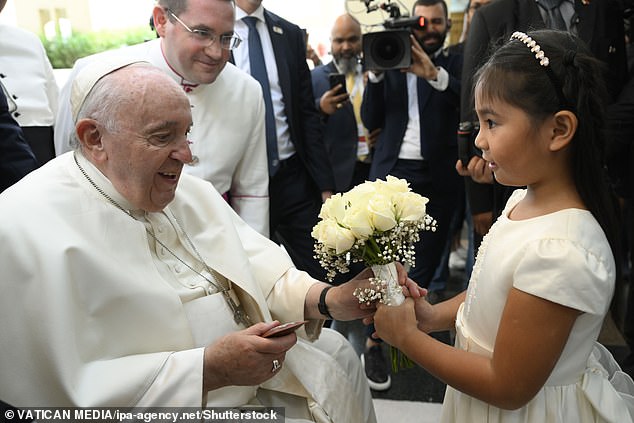 Francis denounced male chauvinism, acknowledging there was still too much of it around the world, including in his native Argentina. ‘This chauvinism kills humanity,’ he said

The Church teaches that only men can become priests because Jesus chose men as his apostles.

On top of these concerns, the Pope added that the Catholic church was working ‘as best we can’ to fight clerical child abuse but admitted there were shortfalls.

During a press conference on a plane while returning from Bahrain, where he had been promoting dialogue with Islam, the pontiff said child abuse inside the Church was a ‘tragic thing.’

‘We are working as best we can, but there are people within the Church who don’t see it clearly’, the 85-year-old Argentinian admitted on the return flight to Rome.

‘It is an ongoing process that we are carrying out with courage,’ he added.

The abuse scandal erupted in the second half of the 1980s, sparking an avalanche of allegations about paedophile priests around the world, from Australia to Chile, France and the United States.

Pope Francis has insisted the Church will adopt a ‘zero tolerance’ approach to abuse, but critics say many countries have yet to seriously confront the issue.

While before ‘some things were hidden’, the pope insisted Sunday that now ‘everything is clear and we are moving forward.’

‘The Church must be ashamed of the bad things, while thanking God for the good things.’