Vatican City: Pope Francis prayed for his predecessor’s passage to heaven during New Year’s Day appearances a day after Pope Emeritus Benedict XVI died in retirement at the Vatican.

St Peter’s Basilica, where Francis presided over a mid-morning New Year’s Mass, will host Benedict’s coffin from Monday. Thousands of faithful are expected to file by the coffin in three days of viewing. 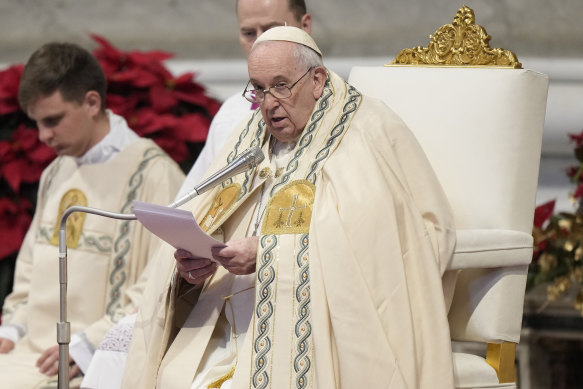 Pope Francis holds Mass in St Peter’s Basilica at the Vatican on Sunday.Credit:AP

Benedict, 95, died on Saturday morning (local time) in the Vatican monastery, where he had lived since retirement. He was the first pope in centuries to resign, citing his increasing frailty.

On Sunday, the Vatican released images of the retired pope’s body resting in the chapel of the monastery Mater Ecclesiae, where he lived after retiring in 2013.

Benedict’s body lay on a burgundy-coloured bier. He was dressed in a miter, the headgear of a bishop. A rosary was in his hand.

Francis looked weary and sat with his head bowed as Mass began on the first day of the year, an occasion the Catholic Church dedicates to the theme of peace. 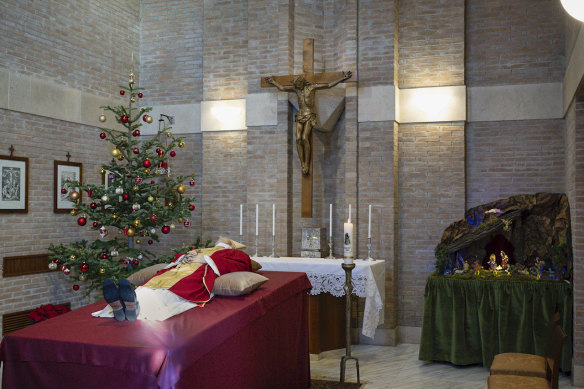 The body of the late Pope Emeritus Benedict XVI rests in the chapel of the monastery Mater Ecclesiae in Vatican City.Credit:Vatican Media

He departed briefly from reading his homily, with its emphasis on hope and peace, to pray aloud for Benedict.

“Today we entrust to our Blessed Mother our beloved Pope Emeritus Benedict XVI, so that she may accompany him in his passage from this world to God,” he said.

Referring to Mary, Francis said that “in these hours, we invoke her intercession, in particular for Pope Emeritus Benedict XVI, who, yesterday morning, left this world.”

“Let us unite all together, with one heart and one soul, in giving thanks to God for the gift of this faithful servant of the Gospel and of the church,” he said, speaking from a window of the Apostolic Palace to pilgrims and tourists below.

The square will be the setting for Benedict’s funeral – led by Francis – on Thursday morning (local time). The service will be a simple one, the Vatican has said, in keeping with the wishes of Benedict.

On Saturday, Francis went to pay his respects after receiving a call from the Reverend Georg Gaenswein, Benedict’s longtime secretary, informing him of the retired pope’s death.

In recent years, Francis hailed Benedict’s stunning decision to become the first pope to resign in 600 years and has made clear it clear that he’d consider such a step himself.

Hobbled by knee pain, Francis, 86, on Sunday arrived in the basilica in a wheelchair and took his place in a chair for the Mass, which was being celebrated by the Vatican’s secretary of state. 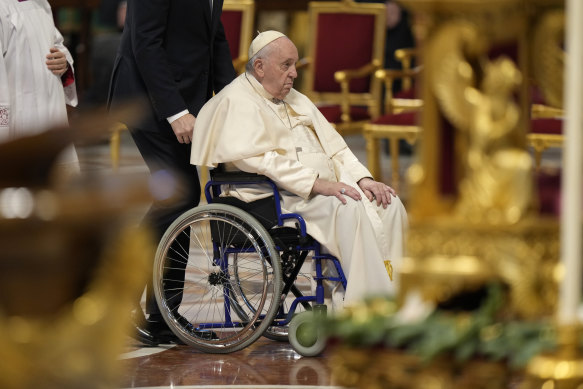 Francis, who has repeatedly decried the war in Ukraine and its devastation, recalled victims of war who were passing the Christmas holidays in darkness, cold and fear.

“At the beginning of this year, we need hope, just as the Earth needs rain,” Francis said in his homily. 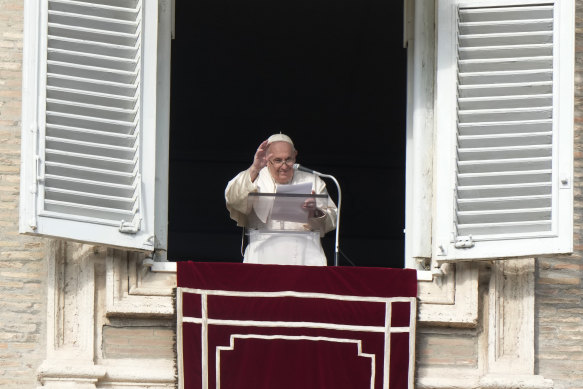 Pope Francis delivers a blessing as he recites the Angelus noon prayer from the window of his studio overlooking St Peter’s Square at the Vatican on Sunday.Credit:AP

Yet, Francis said, “let us not lose hope” that peace will prevail.