Follow
Home » World News » Portland seeks to mend image amid police uproar, civil unrest with ad campaign: ‘You can be yourself here’

Portland seeks to mend image amid police uproar, civil unrest with ad campaign: ‘You can be yourself here’

Portland Police Association Executive Director Daryl Turner argues one reason why members of the Rapid Response team resigned is that some elected officials did not support officers during the more than 150 days of riots in the city.

Portland purchased a full-page advertisement in The New York Times in an attempt to repair its image and attract tourists following a tumultuous year of violent demonstrations in the wake of the death of George Floyd in Minnesota, and the most recent fallout after all 50 members of the police riot squad resigned.

Travel Portland purchased the ad which is set to run through August to encourage overnight local hotel and short-term rental stays from leisure travelers from the cities of Seattle, San Francisco and Los Angeles, KOIN reported. It is part of a campaign called “This is Portland.” Travel Portland also released a video featuring more than 20 Portland chefs, store owners, athletes, performers and artists that is narrated with the same text written in the full-page New York Times spread.

“This is Portland,” the full-page ad consisting of just 23 lines of text begins. “You’ve heard a lot about us lately. It’s been awhile since you heard from us.”

The ad, written in a format resembling a poem, continues, “Some of what you heard about Portland is true. Some is not. What matters most is that we’re true to ourselves.”

“There’s a river that cuts through the middle of our town. It divides the east and west. But it’s bridged – over and over again. Twelve times, to be specific. And that’s kind of a great metaphor for this city,” the ad says. “We’re a place of dualities that are never polarities. Two sides to the same coin that keeps landing right on its edge. Anything can happen. We like it this way.”

“This is the kind of place where new ideas are welcome – whether they’re creative, cutting edge or curious at first glance. You can speak up here. You can be yourself here,” it continues. “We have some of the loudest voices on the West Coast. And yes, passion pushes the volume all the way up. We’ve always been like this. We wouldn’t have it any other way.”

“We have faith in the future. We’re building it every day the only way we know how, by being Portland.”

“Come see for yourself,” the ad concludes, signing off: “Love, Portland.”

The ad was launched just days after some 50 Portland Police Bureau officers resigned from their voluntary positions on the highly trained Rapid Response Team over the indictment of Officer Corey Budworth for allegedly assaulting a photographer during an overnight riot in August 2020.

Portland Police Association, the union representing rank-and-file officers, accused Multnomah District Attorney Mike Schmidt of failing to hold those rioters bent on destruction accountable – pointing out that at the time of the alleged assault, crowds of demonstrators with shields and dressed in black bloc attire tossed a Molotov cocktail at the Multnomah Building, setting it ablaze. 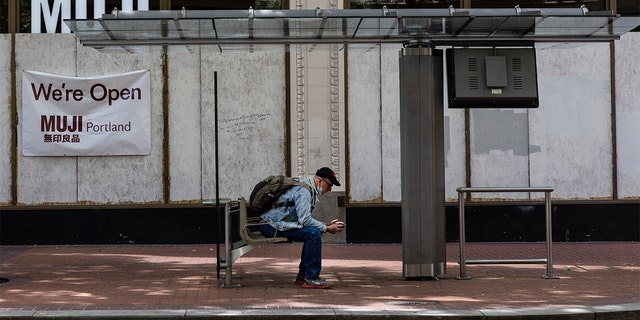 A man sits at a bus stop as wooden panels barricade shops because of on-going protests on Saturday, June 5, 2021 in downtown Portland, Ore. City officials insist Portland is resilient as they launch a revitalization plan — in the form of citywide cleanups of protest damage, aggressive encampment removals, increased homeless services and police reform — to repair its reputation.
(AP Photo/Paula Bronstein)

Without addressing the turmoil directly, Travel Portland issued a statement centered on bouncing back after a year of reduced travel amid the coronavirus pandemic.

“With an overdue and heartfelt opening on the horizon, we are here to inspire and encourage these visitors – our fans – to book,” their statement read. “After a year of encouraging visitors and locals to support small businesses here and from a distance, it’s time to issue an invitation to come back to Portland.”

Meanwhile, the number of homicides in Oregon’s largest city is more than six times greater than the amount recorded in the same period last year. Portland is also reeling from pervasive gang violence at levels not seen since the height of the problem seen in the 90s.

The most recent homicide was recorded over the weekend, after 19-year-old Alexander Douglas Martinson died from injuries suffered during a shooting in the St. Johns neighborhood of Portland. Police were seeking information about potential suspects.

a, Image, Mend, Portland, seeks, to
You may also like: