Kate Meehan knows what it takes to rehabilitate a surrendered dog. Ten years ago she adopted Kelpie ‘Taz’ and inherited all the issues from her previous home where Ms Meehan suspects she wasn’t exercised or occupied enough.

“When I got her she was incredibly destructive, tearing everything up – she just wasn’t getting that physical and mental stimulation,” she said.

“She’s a very intelligent breed, I could run her for 10 kilometres but she’d still not be mentally worn out.” 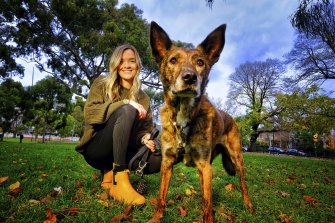 Ms Meehan has been using the knowledge gained through retraining Taz to rehabilitate highly anxious and badly-behaved dogs that have been surrendered since last year’s lockdowns.

After the pet adoption boom during the lockdowns of 2020, at least one organisation – the Petbarn foundation – has seen a drove of cats and dogs that were adopted out last year now coming back as surrenders.

Manager Janelle Bloxsom said the foundation, which takes in and adopts out the overflow of surrendered animals from rescue organisations like the RSPCA, has seen a 200 per cent increase in the past three months of adoptions at their 150 centres fuelled by COVID-surrendered pets.

Ms Bloxsom said they were adopting out four times as many pets as this time last year – the majority being one-year-old cats and dogs that were adopted initially in the 2020 lockdowns. It was something that she had predicted.

“To see the shelters empty, and pet ownership skyrocket. There had to be some kind of surrender, right. And it was going to be big,” says Ms Bloxsom.

According to the Companion Animal Network, which started collecting data from shelters around the country when the pandemic struck, the most common reasons for surrendering an animal over the past year were rental issues, behavioural problems and domestic violence.

Network boss Trish Ennis questioned if the end of the rental moratorium which was in place for much of 2020 had played a factor.

“Have we really seen the result of the financial situation where the landlords now don’t have to put up with people not paying their rent?” she said.

“If people who do have to move out and are still in the position that they can’t pay their rent then are they going to have to surrender their animals?”

Ms Meehan said the dogs and puppies she had fostered that were surrendered during the pandemic were mostly due to the animals not being able to cope when life returned to normal and families returned to work and school.

”Since COVID a lot of the surrenders have been due to change in circumstances – the dogs are coming through with these behavioural issues – they were born into a family that loved them and had all the time in the world for them and then everyone went back to school and work and they freak out because of these changes,” she said.

Dogs who aren’t used to being left alone often started barking and being destructive, she said, and the key to rehabilitating them was to create a safe space for them through crate training and exposing them to normal routines and habits.

“Having a shower and closing a door between you and the dog, for example,” she said. “I had one puppy who’d almost never been put down on the ground before, he was always carried.

“A lot of the stuff I do is socialisation and getting them exposed to things they didn’t see when people were restricted from going far from home – a lot of dogs may not have seen boom gates, or a train or a tram going past before.”

Megan Seccull, general manager at the Australian Animal Protection Society said while many surrenders were due to boisterous puppies who had grown up and weren’t trained, she had seen some heartbreaking examples through the pandemic of people unable to afford their pets anymore.

“We did have one dog where both the husband and wife lost their jobs and the dogs did its cruciate ligament which is a four to five thousands dollar surgery,” she said.

“They were faced with ‘do we feed our children or do we repair our dog’s legs?’ so you understand that – anyone in that situation would say I have to look after my family first”.

Ms Seccull said one upside to the pandemic was an increase in older Australians, who otherwise would have been travelling as grey nomads, wanting a pet.

She said her service had prioritised these empty nesters who did not have work commitments and more time to spend with the animals.

“We had a lot of people in that bracket – and that’s a great home,” she said.

ho, New, Pets, Post-lockdown, seek
You may also like: