The BBC moonlighters: Star presenters are paid more than £5,000 for public speaking events on top of six-figure pay deals they already have at the corporation

Several BBC stars were paid more than £5,000 for public speaking events, on top of their lucrative six-figure deals at the corporation, figures revealed yesterday.

Presenters including Emily Maitlis, Huw Edwards and Dan Walker are continuing to be paid thousands to appear as speakers, hosts, moderators and event chairmen for companies and organisations.

The details were revealed in the latest disclosures from the broadcaster’s external events register.

Other news stars at the corporation getting more than £5,000 for an individual speaking engagement include Today presenters Justin Webb and Mishal Husain, as well as news host Clive Myrie and interviewer Stephen Sackur. 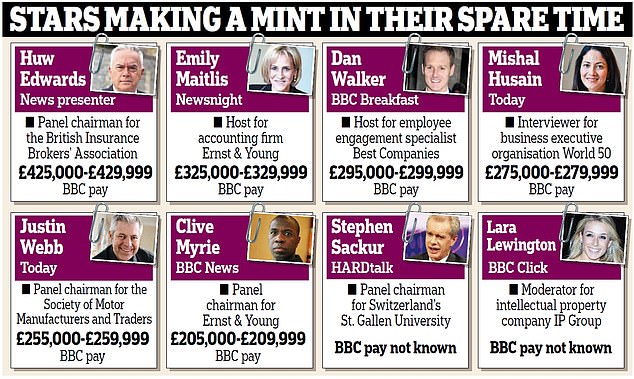 BBC presenters (pictured) including Emily Maitlis, Huw Edwards and Dan Walker are being paid thousands to appear as speakers, moderators and event chairmen for companies

This is the second time the BBC has published this information, after director-general Tim Davie brought in new rules to help strengthen impartiality at the broadcaster.

The list only reveals whether the ‘total fee’ paid to an individual for an engagement was more or less than £5,000, which means that some individuals could be getting much more than this.

Following the publicity generated by the previous disclosures in May, some presenters appeared to have cut back on their outside paid work.

Justin Webb, who earns more than £255,000 a year, had carried out four engagements in which he was paid more than £5,000 in the first quarter of the year.

But the latest figures, for the period covering April to June, reveal he carried out only one, acting as a ‘panel chair’ for the Society of Motor Manufacturers and Traders.

BBC Breakfast presenter Dan Walker, paid more than £295,000, had also halved his external work, going from two engagements in the higher pay bracket in the first three months of the year to just one in the latest figures.

He was paid more than £5,000 to host an event held by employee engagement specialist Best Companies.

Today presenter Miss Husain, who gets more than £275,000 at the BBC, was paid the higher amount for acting as an ‘interviewer’ for World 50. 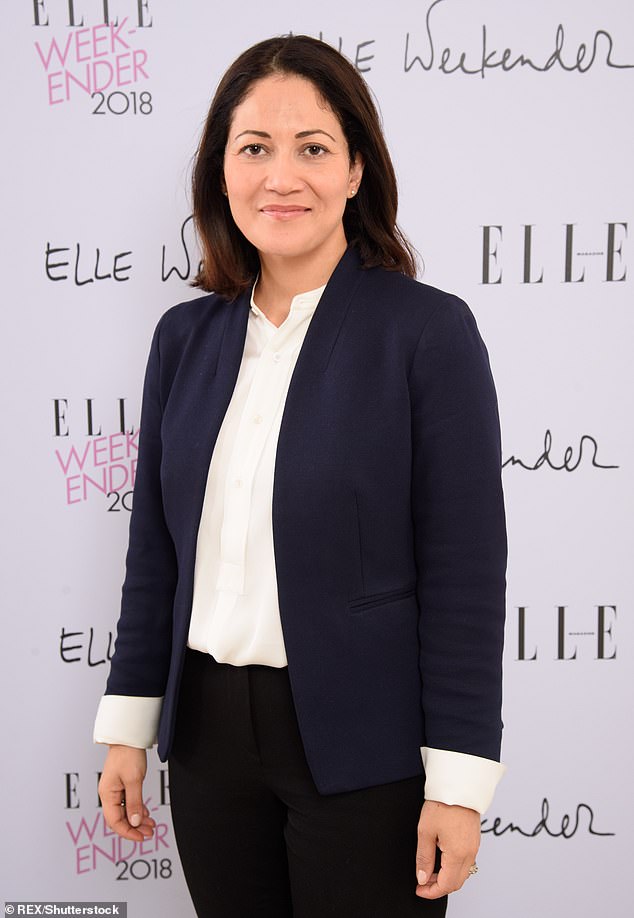 Today presenter Mishal Husain (pictured in December 2018), who gets more than £275,000 at the BBC, was paid the higher amount for acting as an ‘interviewer’ for World 50

The organisation describes itself as a ‘private community for senior-most executives from globally respected organisations to intimately share ideas’.

BBC’s on-air staff in news, current affairs, sport and radio journalism are required to get written approval for external work and must declare what they have been paid.

Some others carried out multiple external engagements which were paid below £5,000.

The figures showed that while the number of external engagements was broadly the same in the two periods, those getting paid more than £5,000 had dropped from 15 to eight in the latest release.

‘The BBC’s robust and longstanding Editorial Guidelines permit staff to carry out additional engagements as long as they do not compromise the integrity or impartiality of the BBC.’

are, More, paid, presenters, than
You may also like: