The Australian political calendar tends to begin just after Australia Day. This makes sense. Before then, many voters – as well as politicians – are on holiday. People are recovering from the previous year, gearing up for the next. It’s not a good time to ask people to pay attention to politics.

So it was surprising when, on Friday, the government released its draft national plan to end violence against women and children – an important response to an issue that dominated politics for much of the past year. This release set the clock ticking for those who wanted to comment on the draft, who were given just two weeks – until the end of January.

This was, as Brittany Higgins put it, “breathtakingly disrespectful”, on an issue the government has often seemed unable to approach with sincere interest. 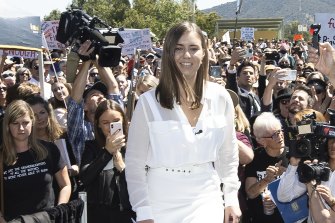 Brittany Higgins was unimpressed with the timing of the government’s plan to end violence against women and children.Credit:Alex Ellinghausen

In fact, it was disrespectful to the point of strangeness. Had the government forgotten it was school holidays, meaning many of the people expected to respond would be looking after children? Or that this challenge might be exacerbated by the Omicron wave and its labour shortages, meaning a sizeable number of families are currently without childcare, or locked in isolation? It was almost as though the government had convinced itself that there were two worlds that could be kept entirely separate: a world in which COVID-19 was happening and a world in which it was not.

Or, to put this with a little more nuance: a world in which the pandemic is affecting almost everything, with concerning consequences, and a world in which it exists only as an abstraction that, if used in the right ways, can be politically useful.

Only in the second of these worlds is it forgivable that the government of Australia might seem consumed for two weeks with the question of whether or not a single tennis player might enter the country. 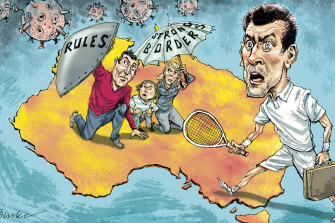 Whatever you think of the result, the Djokovic saga was an impressive display of incompetence. But what has been just as striking as the delays, mistakes, backflips and further delays, has been the tortured rhetoric surrounding it. Justifying the minister’s decision, Scott Morrison said, “Australians have made many sacrifices during this pandemic, and they rightly expect the result of those sacrifices to be protected. This is what the minister is doing in taking this action today.”

Really? Right now, COVID is spreading through Australia faster than it is spreading through almost every other nation in the world. The idea that the unique situation of allowing a champion tennis player to defend his title in a grand slam tournament would have compromised Australians’ sacrifices is a stretch at the best of times, but –as was pointed out in the New York Times – makes little sense now.

Unless, of course, your main objective is to take every opportunity to connect with voters by reminding them of your record earlier in the virus and calling it theirs as well.

In other words, the Djokovic saga has been an instance of COVID transforming into mere debating fodder, a handmaiden to political sloganeering, rather than an actual disease with consequences. If this applied only to the Djokovic case, that would be fine – a trivial enough tale, forgotten soon enough. But this phenomenon seems to be growing. We keep being told our hospitals are fine, we must “live with COVID”, but people who actually work in hospitals are telling us things are awful, even “horrific”, and getting worse. As others have noted, we keep being told about helpful new rules that will allow workplaces to keep functioning as we “live with COVID” – only they assume the widespread availability of RATs, which in the real world are impossible to get. 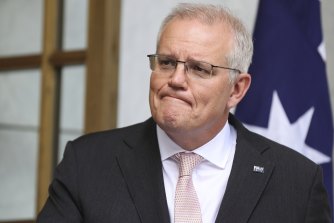 Perhaps this will be a problem for our political leaders. But it seems equally likely to simply reinforce the division that has often existed during the pandemic: between those affected, in one way or another, and those for whom life is surprisingly unchanged.

This is the essential thing to note about the government’s ability to pretend, at times, that the pandemic barely exists. Lockdowns affected us all (if in uneven ways). Now, though, if you don’t work in a hospital or end up in one, if you are not vulnerable or live with someone vulnerable, if you do not work somewhere in which COVID will spread rapidly because of loosened restrictions and the lack of RATs, then it is almost possible to forget the pandemic exists.

What that really means, of course, is forgetting that other people are still experiencing the pandemic in consequential ways. When the government implies there are two worlds – a COVID world and a non-COVID world – it is not entirely wrong. But it does suggest where its focus lies.

In recent weeks, we have seen the re-emergence of old stories about our society. The Prime Minister has refused to provide universal access to free RATs, as though capitalism would somehow sort it out (it hasn’t). Businesses are being left to make their own decisions about re-opening. On Djokovic, we were told “rules are rules”, as though strict and rigorous application of border policies was essential to saving lives (when in fact it often ruins them).

As our government does its best to pretend COVID is all but behind us, it is not a coincidence that the fantasies that have long structured our world are being re-established. Most of us are fine – we can forget about the rest. Border protection will keep us safe. The free market will provide. The system works.