The heir-to-the-throne also backed teen activist Greta Thunberg and other protesters, saying he sympathises with their frustration that politicians “just talk” about global warming instead of doing something about it. 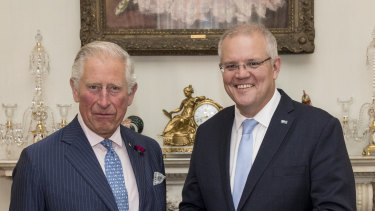 Interviewed by the BBC at the royal family’s estate in Balmoral, the Prince of Wales said it would be a “disaster” if next month’s COP26 summit in Glasgow collapsed, and appeared taken aback when told Morrison still did not know whether he would go.

“I mean it’ll be catastrophic,” Charles said of potential failure. “It is already beginning to be catastrophic because nothing in nature can survive the stress that is created by these extremes of weather.”

Morrison has not decided whether to fly to Glasgow but is negotiating with cabinet and backbench MPs over a new formal policy of net-zero emissions by 2050. He is also under pressure to lift Australia’s existing goal of cutting pollution by 26 to 28 per cent by 2030.

Told the Prime Minister was concerned about quarantining for another two weeks upon return to Australia if he attended the COP26 summit, Charles stopped walking, looked at the interviewer and replied: “Is that what he says, is it?”

Asked what he would say to world leaders about the importance of coming to Glasgow, Charles said: “That’s what I’m trying to say all the time … that this is a last chance saloon – literally. Because if we don’t really take the decisions that are vital now it’s going to be impossible to catch up.”

Charles said he “couldn’t possibly comment” when asked whether the UK government was doing enough. The UK has a goal of reducing emissions by 68 per cent by 2030 and a legislated net zero by 2050 target.

The Queen will attend the Glasgow gathering and Charles and Prince William are expected to deliver speeches.

Charles has for decades warned about the dangers of climate change and the need to protect the environment, often earning him ridicule. The future king said that early criticism “wasn’t much fun as you can imagine” and said he had always been motivated by a desire to leave a better planet for future generations.

When BBC climate editor Justin Rowlatt singled out Australia as a country “reluctant” to combat climate change and asked Charles what he would say to the Morrison government, the prince replied: “Well you gently try to suggest there may be other ways of doing things. In my case, anyway, otherwise you lot accuse me of interfering, don’t you?”

Many federal Liberal MPs believe Morrison will confirm his attendance at the G20 summit in Rome and the Glasgow climate summit once a net zero by 2050 deal has been struck inside the government over the coming days.

COP26 president Alok Sharma, the British cabinet minister in charge of the Glasgow event, has challenged Australia to nearly double its 2030 emissions reduction target and urged Morrison to attend the talks in person.

“You’re some of our closest mates in the world, and we need you by our side to demonstrate the unity of purpose that is going to be really essential at this summit,” Sharma told The Sydney Morning Herald and The Age last week.

Charles also told the BBC he had great sympathy for Swedish climate activist Thunberg and other young activists staging protests ahead of COP26.

“All these young feel nothing is ever happening, so of course they’re going to get frustrated,” he said.

But he warned the tactics of the Extinction Rebellion movement were counter-productive. “It isn’t helpful, I don’t think, to do it in a way that alienates people. I totally understand the frustration, the difficulty is how do you direct that frustration in a way that is more constructive rather than destructive?”

In a lighter moment, Charles revealed the Aston Martin he has owned for 51 years has been converted to run on surplus English white wine and whey from the cheese-making process.

He also said he doesn’t eat meat or fish for two days a week and doesn’t consume dairy products one day each week. “That’s one way to do it. If more people did that you would reduce a lot of the pressure on the environment.”

He also said unlocking the vast amount of capital and investment needed to transition to cleaner energy was a key goal of Glasgow, echoing a 2019 speech to the World Economic Forum in Davos in which he argued market-based solutions and tax reform were the best options to halt the damaging impacts of climate change.

Charles, Mor, Prince, Scott, urges
You may also like: