London: Prince George and Princess Charlotte played a central role in the Queen’s state funeral on Monday, following the coffin alongside their parents the Prince and Princess of Wales, King Charles III and other members of the royal family as it was processed through Westminster Abbey.

Wearing mourning dress – George in a suit and tie, and Charlotte in a coat and hat that matched her mother’s – the children arrived by car with Catherine, Princess of Wales and their step-grandmother, Camilla, Queen Consort, before joining the procession inside the church. 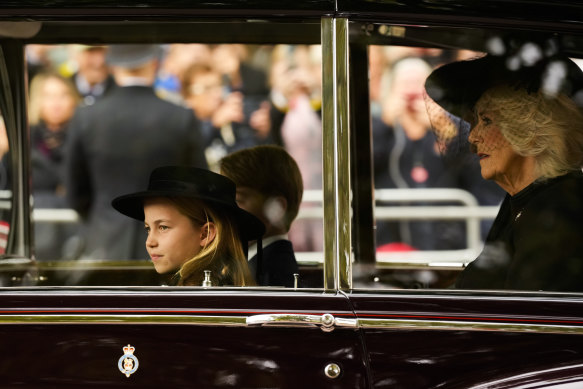 George, 9, and Charlotte, 7, were flanked by their parents as they dutifully walked towards the altar to the Abbey’s choir singing The Sentences.

George mirrored his father in looking around the Abbey, while Charlotte bowed her head, her hands clasped together. Upon taking their seats, Catherine placed a hand on her daughter’s shoulder. The young princess wore a horseshoe brooch pinned to the front of her coat in a nod to her great-grandmother.

The Queen’s great-grandchildren were the youngest members of the royal family to join 2000 mourners including world leaders and foreign royalty at the service.

It is believed the children are the youngest royals to have taken part in a royal funeral procession. Sources close to the palace said their parents thought long and hard about their participation. 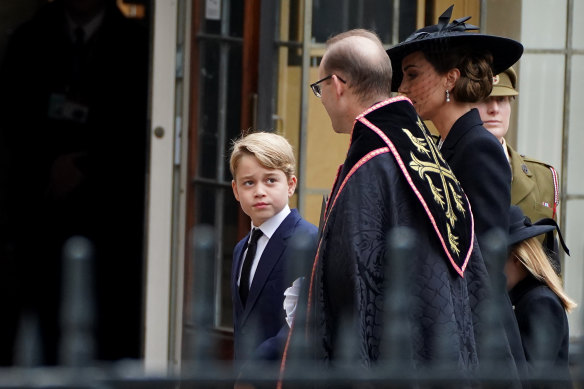 Prince George arrives at the Abbey with his mother, Catherine, Princess of Wales. Credit:Pool PA

The two children sat quietly throughout the service with solemn expressions. Charlotte was seen to look around at the other guests while most of her family stared straight ahead and at one point whispered something in her mother’s ear.

It was the first time the children used their new titles – Prince George of Wales and Princess Charlotte of Wales – as listed in the official Order of Service.

The second and third in line to the throne respectively joined the King and Camilla, the Princess Royal and her husband Vice Admiral Sir Timothy Laurence, the Earl and Countess of Wessex, the Prince and Princess of Wales, the Duke and Duchess of Sussex and the Earl of Snowdon and Peter Phillips. 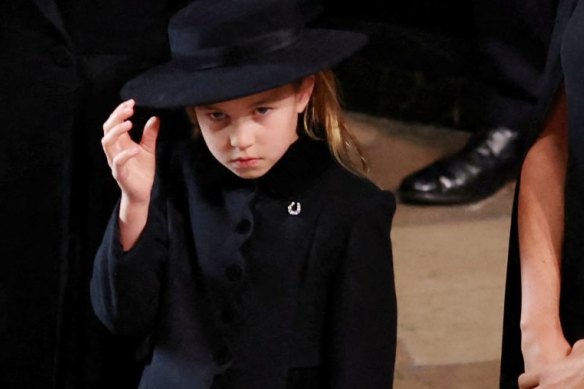 Prince George and Princess Charlotte are also expected to attend the committal service later in the afternoon at St George’s Chapel in Windsor.

It is understood that Prince Louis, 4, the Prince and Princess of Wales’ youngest child, will not attend the committal and neither will the Duke and Duchess of Sussex’s children – Archie, 3, and Lilibet, 15 months.

The Queen is said to have been consulted on every detail of the two services.

The Cambridge children’s involvement echoed the family’s strong presence during the mourning period in which the Queen’s grandchildren took part in a historic Princes’ Vigil earlier in the week, following their parents’ own silent vigil. It also reflected the close relationship the Queen had with both her grandchildren and her great-grandchildren, who famously called her “Gan-Gan”.

The elder Cambridge children attended Prince Philip’s memorial service in March. In June, they participated in the Trooping the Colour parade in honour of the monarch’s birthday and to mark her Platinum Jubilee.

Receive a wrap of our coverage as the world mourns Queen Elizabeth II in our Morning Edition newsletter. Sign up here.