Harry’s ‘heartbreak’ over Megxit: Duke is distraught over ‘painful’ royal rift that has left ‘hurt feelings on all sides’ after the couple moved to America, their ITV friend Tom Bradby says

Prince Harry is ‘heartbroken’ over his rift with the Royal Family, a close friend has claimed.

Tom Bradby said the past year had been ‘painful’ and there were still ‘a lot of hurt feelings on all sides’.

But the ITV news anchor insisted Harry and Meghan were ‘pretty happy’ with their new life pursuing lucrative careers in the United States.

Bradby has known Harry since he was a teenager and filmed a controversial documentary with him and Meghan on their 2019 tour of Africa.

He made the comments about the couple’s acrimonious exit from royal life in an interview with Alan Titchmarsh for a show on ITV tomorrow. 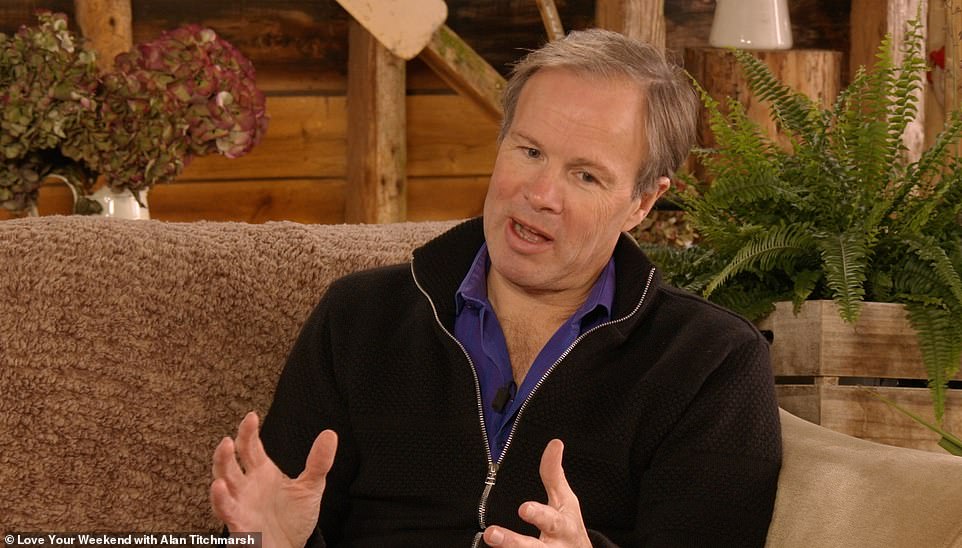 Documentary maker and friend of the Duke and Duchess of Sussex Tom Bradby (pictured) has claimed he thinks Prince Harry is ‘heartbroken by the situation with his family.’ Pictured, on Sunday’s episode of Love Your Weekend with Alan Titchmarsh 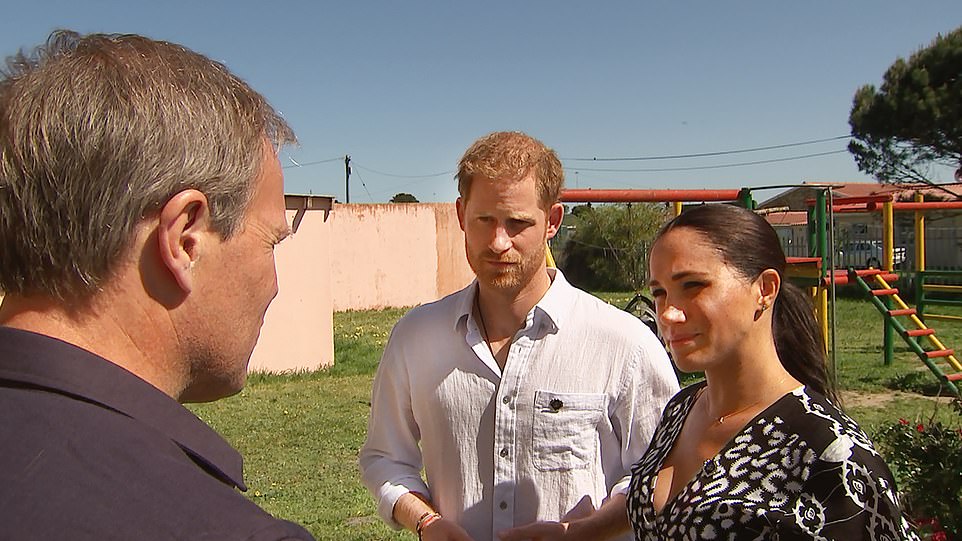 Tom Bradby interviewing the Duke and Duchess of Sussex for Harry and Meghan: An African Journey which aired in 2019

Asked whether he thinks Harry and Meghan seem any happier in California, Bradby said reports that the prince was missing his old life were untrue.

But he confirmed that ‘Megxit’ had been a trying and deeply emotional experience for all involved.

‘I think they are feeling better, yes. I mean there has been a huge amount that has happened over the last year that I can’t talk about and I don’t want to talk about and an awful lot of what has been said is kind of not accurate and not right,’ he said.

‘So are they unhappy? No, I think they are content, the things they are doing they are quite excited by.

‘I think he is heartbroken by the situation with his family, you don’t necessarily need to have knowledge to know that, but I think it is true.’ 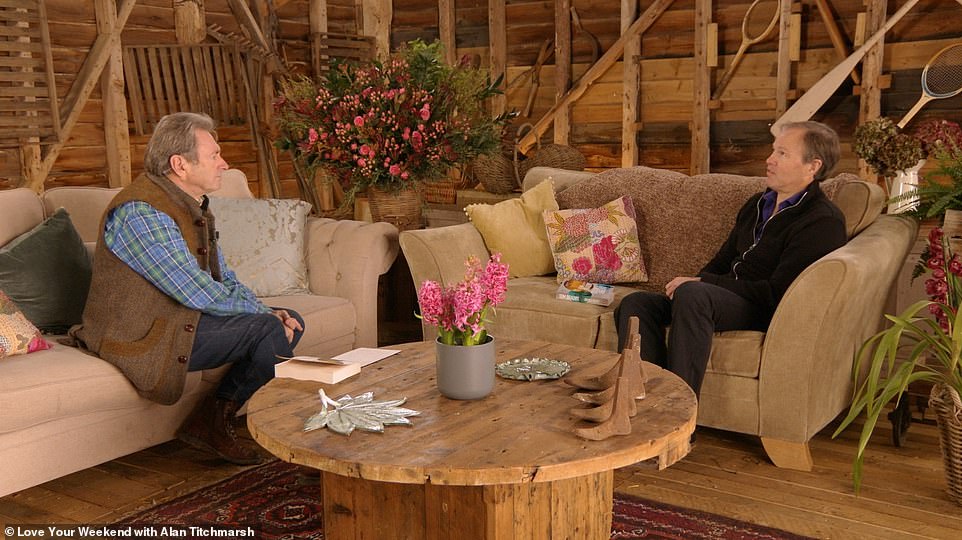 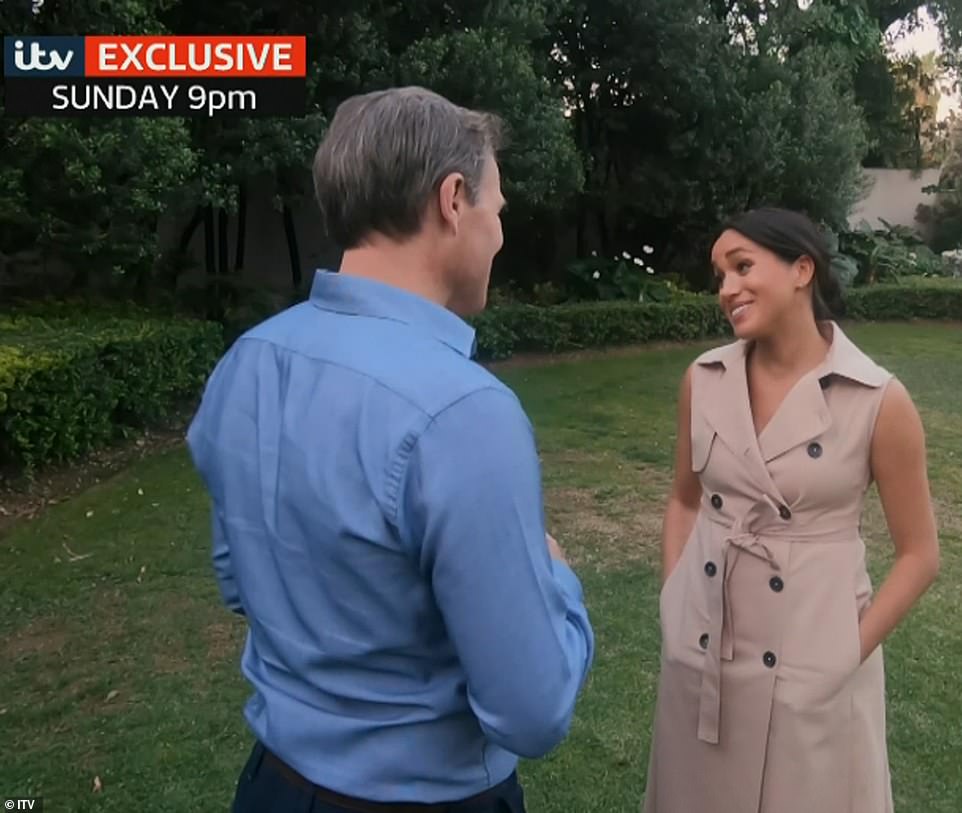 Meghan was interviewed by Bradby for the Africa documentary where she memorably said no one ever asked if she was ‘OK’. In the interview with ITV, The Duchess of Sussex said she found the focus after her marriage and giving birth a struggle

Pressed on whether he was referring to the distance between Harry and William, both of whom he has collaborated with, Bradby said: ‘The situation with the family clearly isn’t ideal and it has been a very difficult year for them all.

‘To some extent, I felt a little bit caught in the middle of them with that [2019] documentary, which is a deeply uncomfortable place to be.

‘And that is, in a way, why I am always reluctant to say anything more because I don’t want to make anything worse or get in between anything or anything like that.

Bradby first got to know Harry when he collaborated with him on a documentary about Lesotho during his gap year after leaving Eton. He went on to attend his 2018 wedding to Meghan.

Prince Harry, Duke of Sussex and Meghan, Duchess of Sussex visited Nyanga Township during their royal tour of South Africa 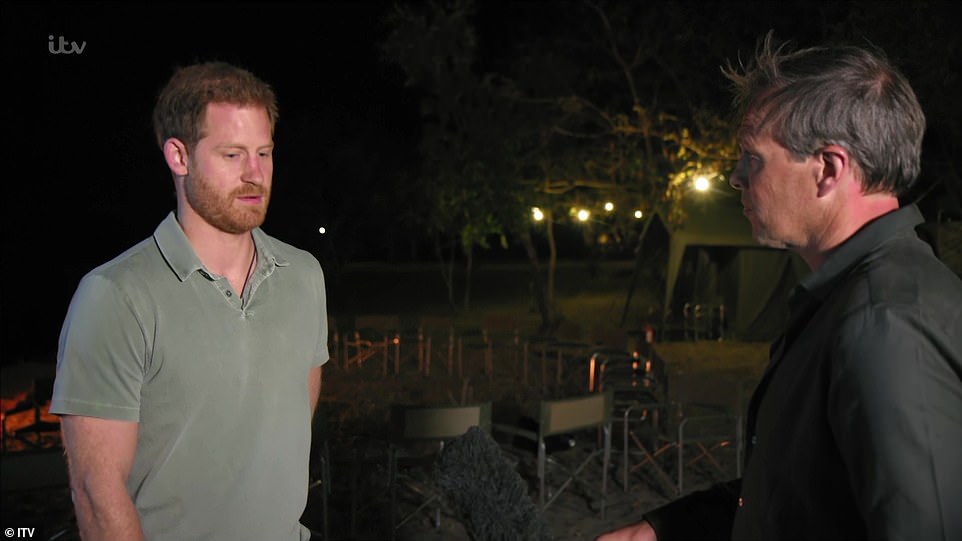 The presenter had also enjoyed a warm friendship with William and was handpicked to conduct his and Kate’s first joint interview after they announced their engagement in 2010, as well as being a guest at their 2011 nuptials.

But the Mail understands there was deep concern in palace circles about his 2019 documentary with the Sussexes, during which Meghan memorably complained that no one ever asked her if she was ‘OK’ and Harry confirmed tensions with his older brother.

William was left deeply worried by Harry’s unhappiness when he watched the programme and some aides felt strongly that Bradby had taken advantage of Harry‘s ‘clear vulnerability’.

They were also aggrieved by briefings the ITV journalist later gave about Harry and Meghan feeling they had been ‘driven out’ of the Royal Family.

In the interview Titchmarsh remarks that most people just want Harry and Meghan to be ‘happy and at peace’. 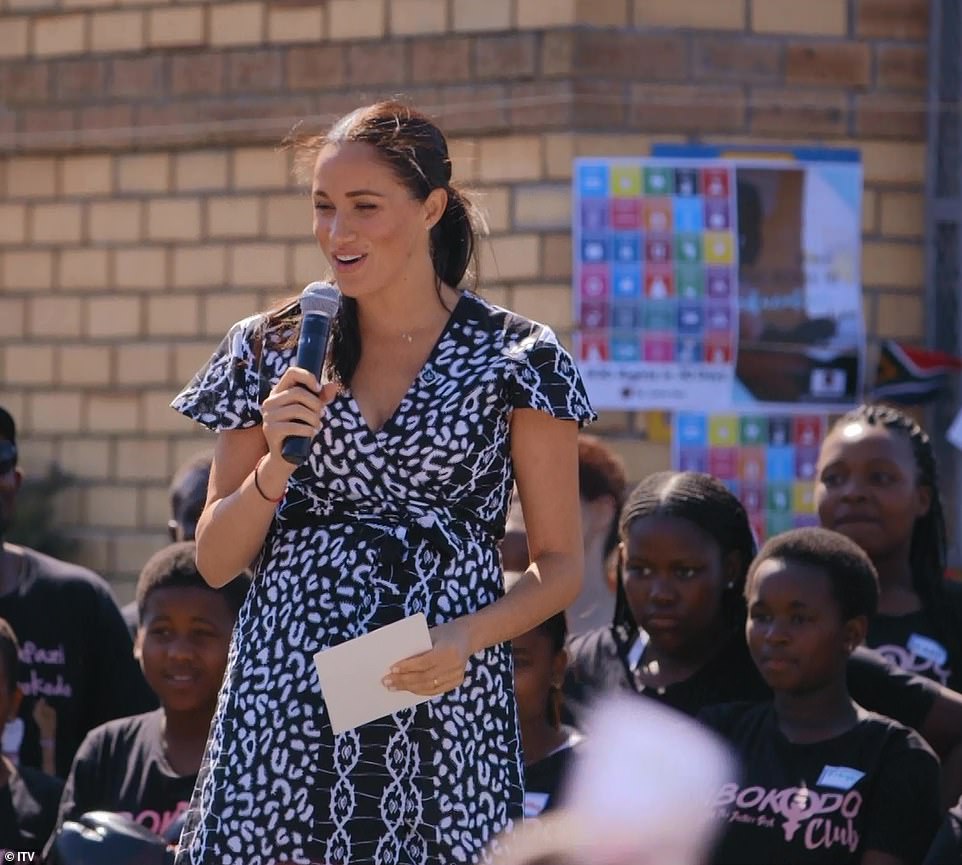 Harry & Meghan: An African Journey offered an insight into the emotional journey the ‘royal couple had been catapulted into 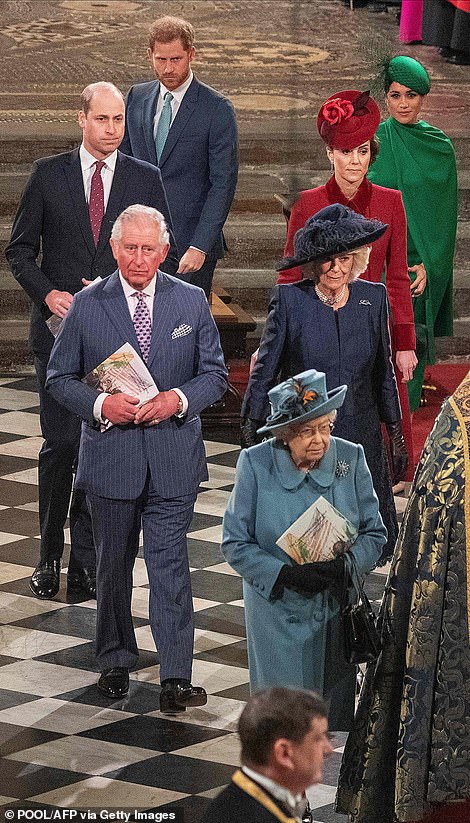 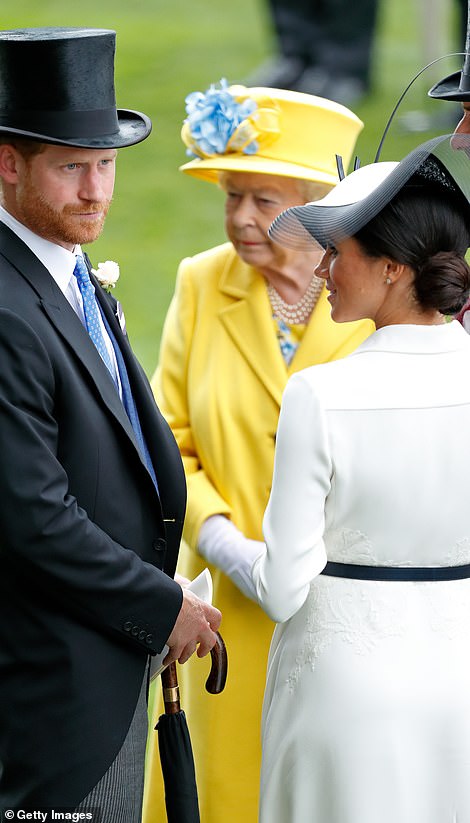 Last week, the Mail revealed the Queen took decisive action to stop Harry and Meghan profiting from their royal roles and regretfully told them ‘either you are in or you are out’. Pictured: The Queen followed by her family as they depart last year’s Commonwealth service in March (left) and (right) Harry and Meghan with the Queen at Royal Ascot in 2018

Bradby responds: ‘The whole thing has just been incredibly painful, that is obvious to everyone. It is painful all round, painful for everyone, difficult to manage.

‘Effectively they have just decided to completely leave the Royal Family, that has never been done. You could go back to the Duke of Windsor, but that was in very different circumstances.

‘It’s never been done voluntarily before and no one still is absolutely clear how it is going to work.

‘There are still a lot of hurt feelings on all sides and it’s very difficult. And I agree with you, I think the public desperately wants them to be OK and everyone to be happy and clearly that hasn’t been the situation over the past year. It is not a very easy or comfortable situation.’

A royal source expressed surprise at Bradby’s comments last night, saying: ‘Surely it would have been better, if this is what Harry feels, that he had said this to his family rather than a journalist.’ 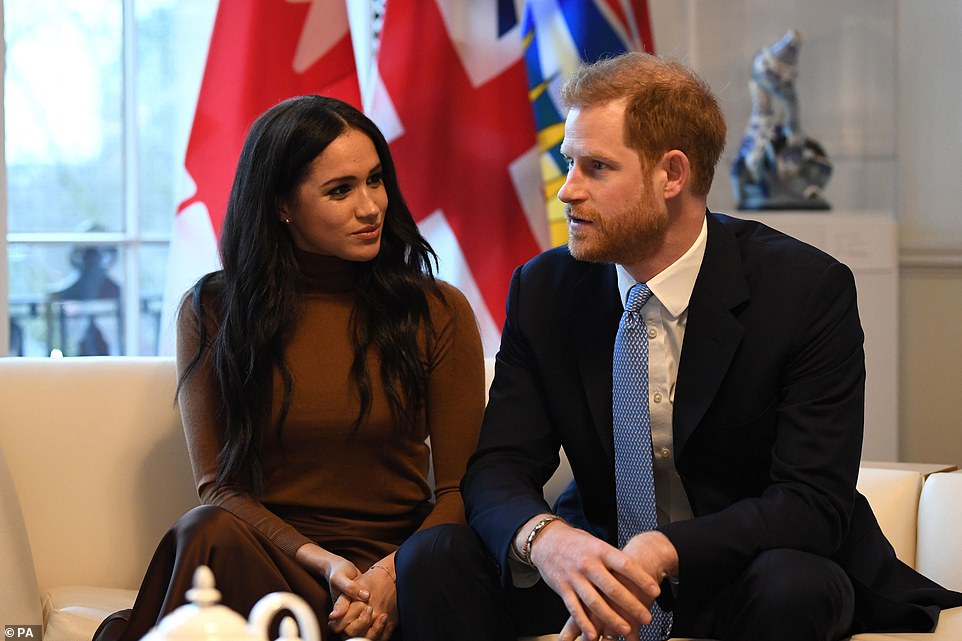 It’s been a year since the couple released a statement saying they intended to step down and become financially independent but still support the Queen – a dual role which in the end was unworkable. Pictured: Harry and Meghan in January 2020

The Mail detailed last week how the Queen took decisive action to stop Harry and Meghan profiting from their royal roles after they demanded to be allowed to pick and chose royal duties while pursuing commercial deals. She told them firmly: ‘Either you are in, or you are out.’

This newspaper also revealed that the 12-month review of their new roles, with a view to the couple retaining some of their royal duties, was ‘dead in the water’ after they secured a string of multi-million pound deals with Netflix and Spotify as well as publicising a new ‘wellness latte’ brand.

Love Your Weekend will be shown on ITV at 10am tomorrow.

distraught, Harry, is, ove, Prince
You may also like: