Follow
Home » World News » Pro-Trump activists have been planning violence ahead of Portland protests, including at one to be held this weekend

Pro-Trump activists have been planning violence ahead of Portland protests, including at one to be held this weekend 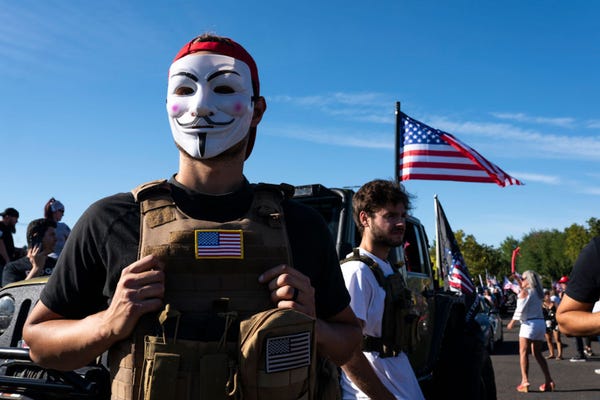 Right-wing activists have been planning to carry out violence at anti-racism protests in Portland, including at one this weekend, according to leaked chat logs reviewed by The Guardian.

Members of the pro-Trump group Patriot Coalition used the messaging app GroupMe to discuss how to acquire weapons to bring to the Black Lives Matter protests. The logs were leaked to The Guardian by the anti-fascist group Eugene Antifa.

Eugene Antifa has also posted some of the group chat logs on its website.

"I saw someone say bats, mace, and stun guns are illegal downtown. If you're going to play by the books tomorrow night, we already lost," Mark Melchi, a 41-year-old Dallas, Oregon man wrote ahead of an August 22 rally, according to the Guardian. "We are here to make a change, laws will be broken, people will get hurt… It's lawlessness downtown, and people need to be prepared for bad things."

Melchi leads a militia he calls Group 1776 2.0, which has attended protests in Portland. In the chat, he has mentioned violence that his group has participated in.

"My Group 1776 2.0. Has been fighting Antifa in Seattle, Portland, for months", Melchi said. "This won't be a simple fist fight. People will get shot, stabbed and beat."

Like many cities around the US, Portland has been a site of social unrest and anti-racism protests in the months since the police killing of George Floyd in May.

In recent weeks, clashes between Black Lives Matter activists and right-wing armed paramilitary groups based in the Pacific Northwest have been violent.

In a discussion on freezing paintballs to make them more dangerous, one organizer, David Willis — who is being sued for his involvement in Cider Riot violence in Portland, suggested another method.

"They make glass breaker balls that are rubber coated metal. They also have pepper balls but they are about 3 dollars a ball," Willis wrote, according to The Guardian. "Don't freeze paintballs it makes them wildly inaccurate" [sic.]

'We must be ready to defend with lethal response'

Members of the group chat appeared to live in a fantasy world where they believed wildfires in California were set exclusively by Antifa activists, and discussed hunting them down in the wilderness and killing them, according to the Guardian report.

While there was no clear consistent political message for the members of the group chat, The Guardian reported that their shared allegiance was with the police and for President Donald Trump, who some said they were "prepared to kill for."

Some members, including Melchi, who claims to be a former military member, fantasized about murder.

"Yes, going after them at night is the solution… Like we do in other states, tactical ambushes at night while backing up the police are key," he wrote about the coordinated attacks, according to The Guardian. "You get the leaders and the violent ones and the police are happy to shut their mouths and cameras."

Despite being enthusiastic about the violence itself, Melchi recommended that members hide their identity to avoid murder charges later.

"We must be ready to defend with lethal response… Suggest wearing mask and nothing to identify you on Camera…to prevent any future prosecution," the Guardian reported him writing.

The group has also discussed violence against Portland Mayor Ted Wheeler, with one user writing: "Fuck wheeler… guess what soon as we are done with these punks. He's next freakin coward !!!!!!"

Another, responding to a report that an arsonist had been released on bail, wrote:  "Maybe we need to start taking care of the justice ourselves!", adding, according to The Guardian, "Start with justice on our DA and then move on to the governor. Maybe by the time we get to the first judge, they will have changed their tunes."

When The Guardian reached out to Melchi, he first said that the chat logs could have been altered. Then he threatened the reporter.

"I suggest you don't threaten combat veterans sweetheart, might get a little uncomfortable for ya big guy!" The Guardian reported him saying.

Melchi didn't immediately respond to Insider's request for comment. David Willis could not be reached.

Read the original story in The Guardian »»

black lives m, Portland, Trump
You may also like: