A pub has defended its new ‘locals only’ policy after banning tourists in an attempt to meet social distancing guidelines.

The King of Prussia Inn – known as the Proosh to its regulars – is in the picturesque riverside town of Kingsbridge, Devon.

Landlady Sara Roberton has left a chalkboard A-frame on the street outside to tell holidaymakers flooding to the area that they are not welcome inside.

It reads: ‘Locals only. Due to restrictions by Boris!! He has made a small pub smaller.’

The sign adds: ‘Due to the small capacity we can only accommodate our locals.’

Sara has since explained that she is now starting to get fed up with people taking pictures of the sign which is displayed prominently near the entrance to the town. 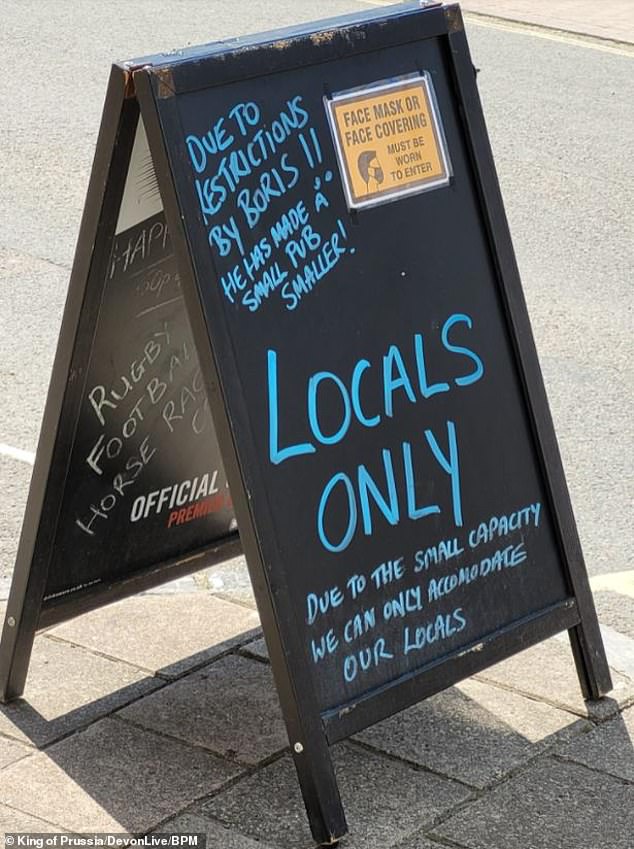 Sara, who runs the Grade II listed pub with her partner Tim Newman (a born and bred Kingswear native), said that in the first lockdown they tried to politely explain to visitors that they did not have room – but she said nobody would listen.

The ‘locals only’ sign has already attracted national media attention after a GP from Nottingham thought the sign was not very friendly to holidaymakers and posted a picture of it on Twitter.

But Sara says he took his picture on a rainy day and the white chalk explanation of how small the pub is had been washed off.

Sara said: ‘Unfortunately it went mad on Twitter after a doctor from Nottingham took a picture and posted it.

‘All my locals had a go at him and he took the picture down and that was that.

‘I get fed up of people taking pictures of the sign all the time. We tried it the polite way in the first lockdown. We had a polite notice board but nobody read it.’

Sara explained that the King of Prussia has several families with three generations who come in together: ‘This pub is ancient – it dates from the 1800s if not before.’ 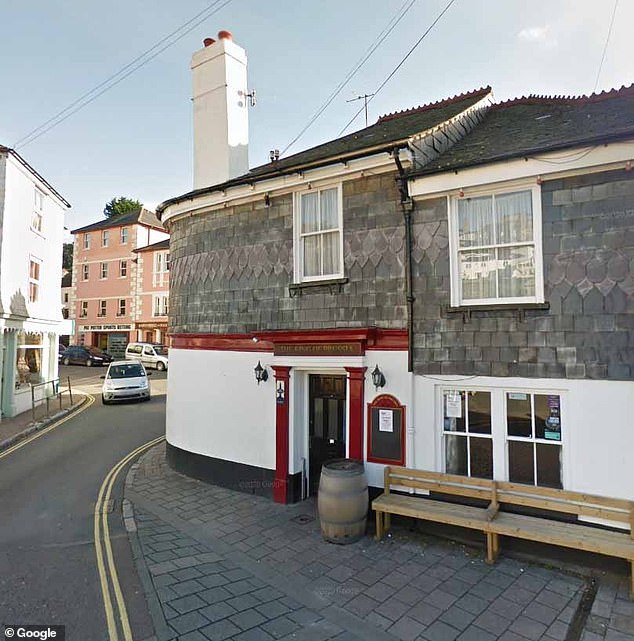 The King of Prussia Inn – known as the Proosh to its regulars – is in the picturesque riverside town of Kingsbridge, Devon

She continued: ‘We are such a small pub. I’m fine with my regulars. They are here all year round.

‘I don’t think my regulars should have to go without a seat because of visitors. I’m not opposed to them sitting outside.

‘We’ve had a few in who asked if they can take a drink outside and we’re fine with that. It’s not because we’re unfriendly, we just don’t have the space.

‘It’s not my fault the government made all these rules. Now it’s all table service and everyone has to remain at their table.

‘We used to have five tables but we’ve taken the pool table out to make room for two more.

‘We are already crazy busy running table service. I don’t have time to keep stopping and trying to explain the rules.

The tables are also needed by locals who play the popular Devon card game of Euchre and dominoes.

It also sponsors the local football and rugby teams.

bans, Devon, in, pub, tourist, town
You may also like: