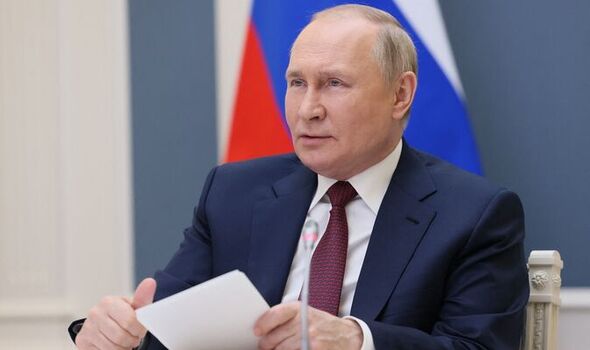 Such a move would allow Moscow – which already controls Ukraine’s grain exports – to also dominate much of the nation’s vast energy reserves. Peace negotiations to end the three-month war remain stalled, despite mounting pressure from some Western corners.

Though Ukraine’s untapped gas wasn’t the primary motive for the February 24th invasion, denying it to Ukraine is an important plank of Putin’s “total economic war with Ukraine”.

Most of this lies east of the Dnipro river, with tranches in Kharkiv and Poltava Oblasts, as well the Black Sea and Azov regions including Crimea.

“The peace talks are dead, Neither side can risk looking like they’re not interested in a diplomatic resolution, and neither give the other what they demand on political grounds,” said Prof Mark Galeotti of the Council on Geostrategy think tank

“In the meantime, Russia is pursuing complete economic warfare. They are seeking to grind Ukraine down.

“Look at the Black Sea blockade – Russia didn’t start the war to steal Ukraine’s wheat, but they’d rather take it than allow Ukrainians to market it.”

One of President Volodymr Zelensky’s main pledges in 2019 was to ”clean up” Ukraine’s corrupt energy sector and steer the country to energy self-sufficiency by boosting production of natural gas, biogas, hydrogen and biomethane – thus eliminating reliance on Russian imports.

As a net exporter, it would go some way to replace Russia as a gas provider to the EU, which is set to import around 90 percent of its gas needs by 2030.

Russia’s invasions put an end to this.

All this risks hastening the prospect of the West tiring of bailing Ukraine out, Prof Galeotti warned.

“Russia knows that the more perilous Ukraine’s economic position becomes, the more it has to demand and depend on Western final assistance.

“If you can increase the price tag for the West, that is a big advantage.”

Fractures have already appeared between frontline EU member states in Eastern Europe and the Baltic, and Western industrial giants Germany, France and Italy.

Foreign Secretary Liz Truss was forced last week to urge allies not to take their ”foot off the accelerator now” by appeasing Russian aggression.

Her comments, in Bosnia and Herzegovina, followed a high-profile intervention by former US Defence Secretary of State Henry Kissinger, who became the latest public figure to warn against marginalising Russia, calling on Ukraine to accept its territorial losses of the 2014 war in order to end hostilities.

In France, President Emmanuel Macron continues to pursue talks with Putin, with French diplomats privately stating growing impatience with the extent of economic sacrifice – particularly over energy sanctions and the refugee issue.

And, while it will ban oil imports, Germany has followed Italy’s example with gas, using EU guidance to stay clear of breaking sanction rules.

Last week German chancellor Olaf Scholz was accused by Polish PM Andrzej Duda of breaking a promise to send modern tanks to replace those which Poland has given to Ukraine.

“We had a promise. We hear Germany isn’t willing to fulfil it,” said Duda.

This malaise could affect Ukraine’s post-war reconstruction, estimated to cost a trillion pounds.

Though the US has recently approved a £40bn package, half of this will go on military equipment.

And recent calls Baltic States to use £300bn in frozen Russian assets are thought legally unworkable.

“The only way forward is a second Marshall Plan, but this partly depends on the nature of any settlement. If the conflict freezes now, what’s to stop it breaking out again? Investors will be weary,” said Ed Johnson, of Sibylline strategic risk group.

“Putin is banking on the West getting distracted or bored with Ukraine, or economically unwilling to assist.

“And political fatigue is a real risk. Billions were spent on combating the Covid pandemic, and this kind of spending is unsustainable.”

He added: “In the meantime, entire factories are being moved back to Russia and retooled and advanced agricultural equipment is being stolen – anything to leave an economic black hole.

“If things don’t change, Ukraine’s prime agricultural lands will be gone, and so will access to ports and energy reserves.”