Moscow: President Vladimir Putin’s United Russia party is expected to maintain its grip over the State Duma, or lower house, exit polls in the country’s parliamentary elections show, amid complaints by opposition parties and independent observers of widespread fraud.

Early results released after polls closed in the three-day vote also put United Russia ahead of the Communist Party and other rivals. The polling agency Insomar predicted United Russia would win with 45 percent of the vote. 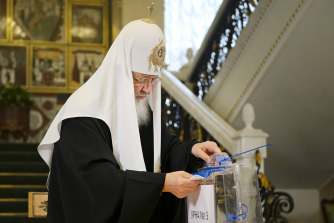 With nearly 13 per cent of ballots counted, the Central Election Commission also said United Russia had won just more than 40 per cent of the vote.

Opposition parties and observers reported ballot stuffing and other tampering during the three days.

“The elections are being stolen from us,” said Mikhail Lobanov, 38, a university lecturer running with the Communist Party in southwest Moscow.

Ella Pamfilova, chief of the Central Elections Commission, said the number of violations was lower than in previous elections. She said 12 cases of ballot stuffing had been confirmed. Mikhail Davydov, the head of the Interior Ministry’s main department for the protection of public order, said there were no violations significant enough to affect the elections. 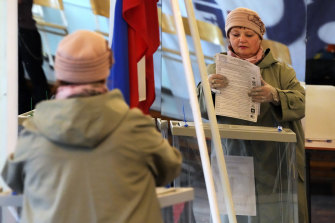 A woman reflected in a mirror casts her ballot during the State Duma, the Lower House of the Russian Parliament and local parliament elections at a polling station in Saint Petersburg, Russia.Credit:AP Photo/Dmitri Lovetsky

The vote was held amid a sweeping, months-long crackdown on the opposition.

Opposition leader Alexei Navalny is in jail. His electoral network was declared an extremist organisation in June and effectively banned. Its leaders, other opposition figures, human rights activists, human rights lawyers and independent journalists have been arrested or fled the country. Dozens of opposition candidates were barred from running or withdrew under threat of arrest.

United Russia has faced a slump in its popularity due to malaise over years of faltering living standards and the allegations of corruption.

Initial results showed the Communist Party finishing in second place with around 24 per cent of the vote, followed by the nationalist LDPR party with around 9 per cent. Both parties usually back the Kremlin on key issues.

Putin, who turns 69 next month, has not said whether he will run again for the presidency in the 2024 election.

bu, election:, party, Putin's, wins
You may also like: