Then he FaceTimed his agent, Nicole Lynn.

Tears again welled in the eyes of the quarterback the New England Patriots had just selected in the fourth round of the 2022 NFL draft.

The duo was overjoyed, of course, that a Victoria, Texas, product whom recruiting services awarded zero stars out of high school had now surpassed NFL pundits’ draft expectations even in an atypically rough year for quarterbacks.

But that wasn't the only reason Lynn was overcome.

“I was so emotional, because it was beyond me,” Lynn told USA TODAY Sports. “It felt like a barrier was broken for a lot of people … like, ‘Oh my gosh, we are making headway here. We are doing this.’ ”

Because for the first time in seven years since she began representing NFL players, Lynn had finally guided to draft weekend a client who is white. She'd become just the second Black agent – and first Black woman – in that stretch to solely represent a white quarterback in the draft, a USA TODAY analysis found. (Since 2015, 88 passers have been selected.) And she had exceeded her and Zappe’s expectations.

So as the Patriots selected Zappe with the 137th overall pick, Lynn finally allowed pride to overtake months of impostor syndrome. She hadn’t let down Zappe, herself or minority agents.

“The margin for error is very tight, right?” NFL agent David Mulugheta, who is Black and negotiated the most lucrative fully guaranteed contract in NFL history (on behalf of Deshaun Watson), told USA TODAY Sports. “Even if it’s not her fault, if it doesn’t go as planned, unfortunately it could become a stereotype.”

While determining precise data on the racial makeup of agent-player combinations through the years is difficult, white NFL players – and particularly white quarterbacks – have hired Black agents so sparingly that the mention of its occurrence prompts several league insiders to recall renowned agent Eugene Parker representing Rex Grossman, who is white, in the 2003 draft. 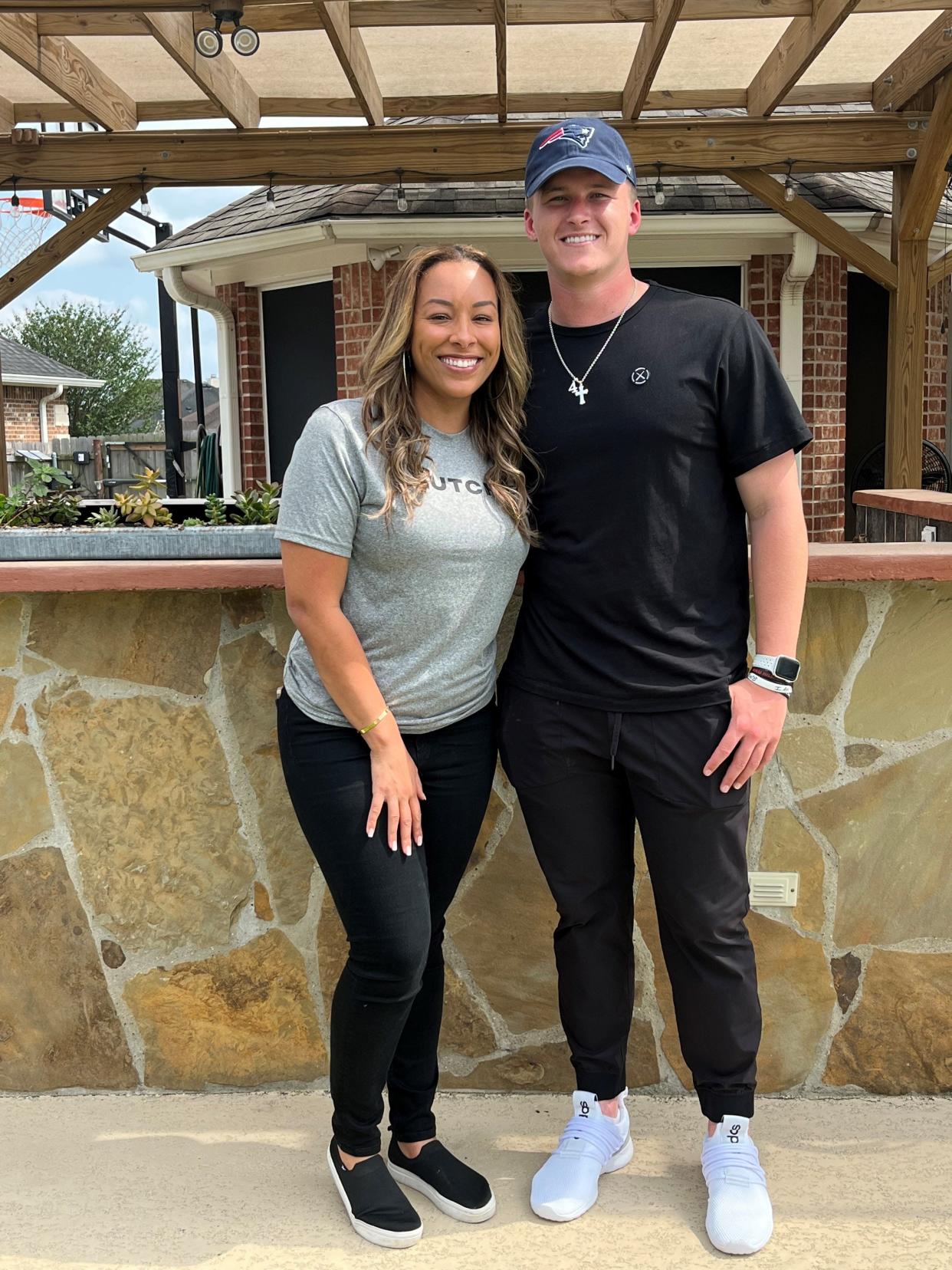 Zappe wasn’t aware of that landscape when he hired Lynn, but she understood how historically unusual his choice was.

“Cool and rare,” Mulugheta said. “He’s amongst rare air, for sure.”

NFL DRAFT GRADES: Which teams had top classes this year?

NFL DRAFT STEALS: 10 players who were taken too low

When Lynn received her NFLPA certification in 2015, she set her first major goal: represent a first-round draft pick. After the New York Jets drafted her client Quinnen Williams third overall in 2019, Lynn homed in on her next goal: represent a quarterback in the draft. The Philadelphia Eagles selected her client Jalen Hurts in the second round two years ago.

Goal 3: Represent a player who is white.

“I really felt like we have all these racial divides in the NFL, whether it’s players or the actual NFL, and we’ve got to find a way for representation to really have an equal footing and seat at the table,” said Lynn, who also serves as Klutch Sports Group's President of Football Operations. “That first step is getting white players to trust minority agents.”

For years though, Lynn said she “couldn’t get in the room” – even for an initial interview – with white clients and their families.

Then a serendipitous series of events began unfolding Sept. 12, 2020, when Football Championship Subdivision program Houston Baptist University played at Texas Tech. Lynn attended the game while supporting her husband, Gabe, who coaches Houston Baptist defensive backs. Zappe, in his fourth year as HBU's quarterback, rose to the occasion against the Big 12's Red Raiders, completing 30 of 49 passes for 567 yards and four touchdowns.

Houston Baptist lost 35-33 despite being a 41½-poing underdog. Lynn wondered: Who was this guy slinging it?

She messaged Jim Nagy, executive director of the Senior Bowl. He hadn’t heard of Zappe.

“She put him on the radar, there’s no doubt about that,” Nagy told USA TODAY Sports.

Lynn said she didn’t formally recruit Zappe during his COVID-shortened, four-game season. But they exchanged contact information so she could answer the family’s questions. Zappe asked Lynn’s advice on whether to declare for the 2021 NFL draft or capitalize on the COVID-permitted fifth year of eligibility. He said some agents had advised that his stock would hover in the Round 7 to priority-free-agent realm regardless. Lynn believed another season of exposure could open doors.

“She was the one who bluntly told me, ‘No, you need to stay,’ ” Zappe told USA TODAY Sports. “Basically, ‘You’re not good enough to go this year, so you need to stay one more year.’ ”

Transferring to Western Kentucky to rejoin Houston Baptist offensive coordinator Zach Kittley, Zappe erupted: He passed for 5,967 yards to break an 18-year-old NCAA record. Zappe’s 62 touchdowns in 14 games also broke the record of 60 (in 15 games) that Heisman Trophy-winner Joe Burrow had set at LSU before the Cincinnati Bengals drafted him first overall in 2020. And in games against the Big Ten's Indiana and No. 17 Michigan State, Zappe tossed six touchdowns to no interceptions while completing more than 70% of his passes in each performance.

“She’d been trustworthy, someone I could trust and talk to about the whole process and she was really upfront with me about what she knew,” Zappe said. “It does not matter gender or color, nothing. It just depends how you do what you do.

“Everyone knows Nicole is one of the best in the entire profession.” 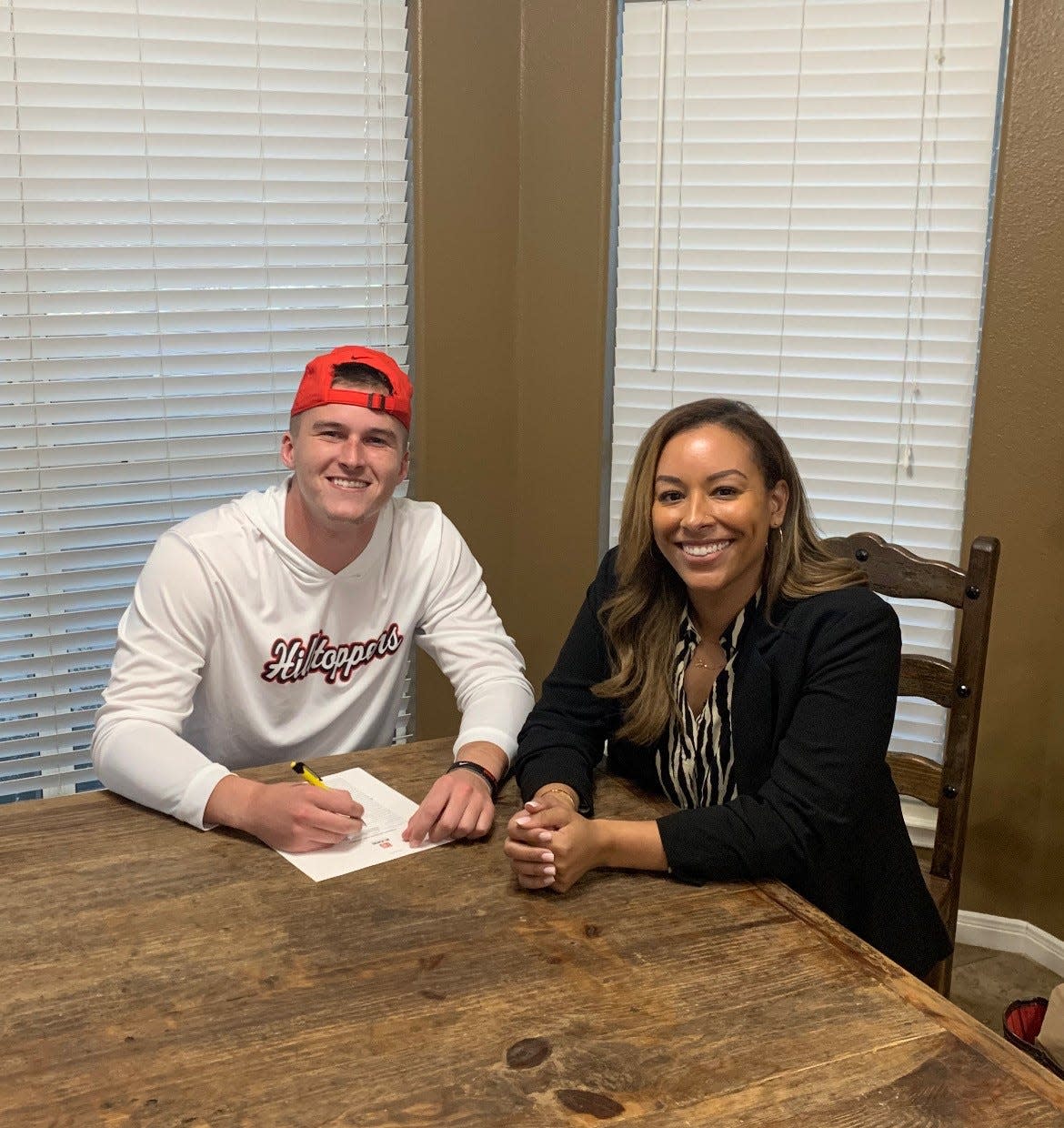 He called when she was celebrating her birthday and gave a verbal commitment. The opportunity made Lynn “feel like I could do anything,” she said. “A hurdle removed.”

She didn’t tell Zappe that. She instead told him what she was determined to prove: “I won’t let you down.”

Even as her excitement built, Lynn wondered: Would she and Zappe would have anything in common? She was a Black woman who grew up in city life in Oklahoma; he was a white man raised on hunting and fishing in rural Texas. She loved books and had written one; Zappe said he rarely reads. Could her Beyoncé vibes square with his love of George Strait?

“We couldn’t be more different,” Lynn said. “But I get him the way I get Jalen Hurts. I know this kid really well and we just connect. It’s so regular and so natural.”

They strategized the pre-draft process when Zappe interviewed with all 32 NFL teams at the Senior Bowl in February. More than half the clubs invited him for interviews at the scouting combine in March and again ahead of his pro day. Arm strength concerns would be addressed with 13 deep balls on Zappe's 56-throw pro day script. Questions about the Air Raid offense's relatively simplistic verbiage could be dispelled with recall of specific plays – like the 13-yard touchdown Zappe completed in a 42-21 win vs. Rice on a play called “Blue Rug Z Quick Pop Lakers Toss Fox 95 H F Wheel.”

Multiple NFL scouts at @WKUFootball pro-day have told us QB Bailey Zappe was “impressive”. Hit 55-of-56, including 13 deep balls, in “freezing” 🥶 conditions that included 20+ mph winds. Many teams with established starters are locked in on @baileyzappe04 as a dependable backup. pic.twitter.com/xmJk3gUEx7

And as Zappe answered teams’ questions, Lynn answered his on “everything known to man,” he said – including fashion. Zappe was Lynn’s first client to ask whether pants and cowboy boots qualified as appropriate business-casual attire for his visit to the Carolina Panthers. A team rep confirmed: They do.

By draft weekend, Lynn and Zappe had learned much about each other. They could talk about TV shows and cooking and life for hours, as they did the night before pro day. And their optimism grew, Lynn guessing Zappe would go in the fifth round. But he knew how capricious the draft could be.

“Seahawks and Cowboys had me going undrafted,” he told his family in a scene captured by NFL Films’ "Hey Rookie, Welcome to the NFL" crew. “Patriots and Browns had me going like fourth.” 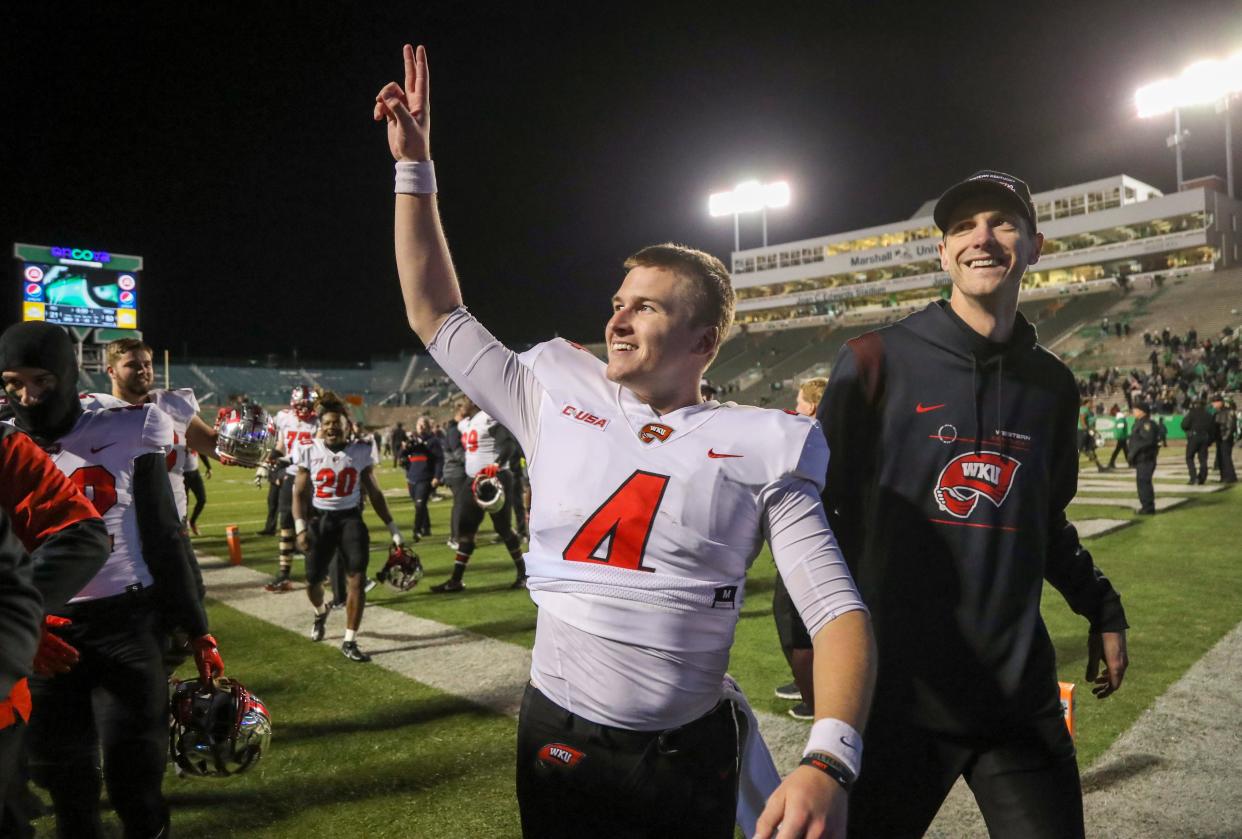 When the draft finally began April 28, Zappe encountered a new roadblock. For the first time in 21 years, only one quarterback – first-rounder Kenny Pickett of the Pittsburgh Steelers – was selected by the end of Round 2, pushing down several passers who were expected to be taken ahead of Zappe.

Lynn began to worry: Would her client even get drafted? If he didn’t, would their results impact minority agents recruiting white clients in the future?

“One shot with a white kid,” she said. “I had this extra pressure of every Black agent and felt like, ‘If I mess this up, that’s it for everybody.’ ”

Entering the final day of the draft, three more quarterbacks had left the board. Four down, two to go, according to what some teams had told Lynn and Zappe about their position rankings. So when the Patriots called to tell her they were drafting her client, she asked: Which one?

Meanwhile, at his home, Zappe had estimated he was safe to use the restroom with the Kansas City Chiefs, Bengals and Patriots coming on the clock. Why would teams who had recently invested first-round picks in starting quarterbacks prioritize one this early?

In the hallway, his phone rang.

“Thank you so much, Nicole,” Michael Zappe responded.

Zappe became the third white quarterback to be represented solely by a Black agent in that stretch, a USA TODAY analysis of the 88 quarterbacks drafted since 2015 found.

Lynn drove two hours to Victoria to celebrate with the Zappes.

“To have her there, have her meet my whole family and kind of show everybody like – yeah, she’s a badass,” Bailey said, apologizing for his language.

‘Make it the norm’

Zappe and Lynn are still soaking in what they call his “surreal” draft fortune.

“You put on the film of Bailey Zappe, and it’s hard not to like him,” Patriots director of player personnel Matt Groh said. “It’s going to be up to him to carve out what role that is initially, and then going forward.”

“I don’t think it’s one magical thing that’s going to happen that does it,” Mulugheta said. “Just doing good work, continue that and make it the norm.”

He lauded the Zappes for “being open-minded and willing to sit down and talk to people that others may think would be outside of his normal comfort zone.”

Bailey Zappe is glad he did.

“In a profession that has a barrier, that needed to be knocked down and overcome,” he said. “You don’t judge a person by the way they look or what color they are. It just matters the way they treat you.

“Whether she’s from Oklahoma and I’m from Texas, she’s bougie and I’m not bougie, I go hunting and fishing and she’s never done that — just to have different backgrounds, to kind of learn from each other and learn different sides of how (we) grew up was awesome to learn someone else’s different viewpoint of life.

“No matter who you are, anybody can be friends. And we’re friends. I could never be more thankful for having her as my agent.”