Reese Witherspoon's Hello Sunshine is being sold for nearly $1billion

The new media company, which has yet to be named, was formed by former Disney executives Tom Staggs and Kevin Mayer and is backed by Blackstone, The Wall Street Journal reported.

Hello Sunshine, which was founded by Witherspoon, 45, five years ago, will be the company’s first acquisition.

Witherspoon, along with Hello Sunshine Chief Executive Sarah Harden, will continue to operate the brand, as well as serve on the new media company’s board.

The pair will also be significant equity holders in the new venture. It is unclear exactly how much Witherspoon and Harden will make from the deal. 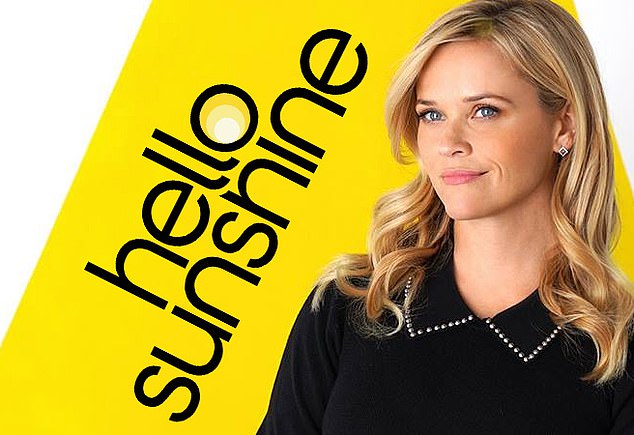 Witherspoon said the deal is a ‘major endorsement’ of her commitment to sharing stories told by women.

‘I’m going to double down on that mission to hire more female creators from all walks of life and showcase their experiences,’ she said. ‘This is a meaningful move in the world because it really means that women’s stories matter.’

Hello Sunshine, which is responsible for several projects including include Hulu’s Little Fires Everywhere and Apple Inc’s The Morning Show, was founded with the mission of putting women at the center of all content it creates.

The actress and entrepreneur said, in a statement to Variety, partnering with Blackstone was a ‘huge step’ in achieving that mission, noting that the deal will enable Hollywood creators to tell ‘even more entertaining, impactful and illuminating stories about women’s lives globally’.

Mayer and Staggs are looking to acquire other content companies, as well as roll several smaller media companies together.

They have reportedly considered a deal with Will Smith and Jada Pinkett-Smith’s media company, Westbrook Inc.

Mayer and Staggs said they are ‘thrilled’ to be partnering with Witherspoon, Harden and the entire Hello Sunshine team.

‘Hello Sunshine is a perfect fit for our vision of a new, next generation entertainment, technology, and commerce company. We seek to empower creators with innovation, capital, and scale to inspire, entertain, and delight global audiences with engaging content, experiences, and products,’ they told Variety.

‘Our platform will foster a uniquely creator-friendly culture that gives elite talent the resources they need to create and capitalize on their best, most inventive work. We look forward to backing Reese, Sarah, and their world-class team as they continue to produce and identify dynamic, engaging content for years to come.’

The deal comes as the major streaming services like Netflix, Disney+ and HBO Max are fighting over content in an effort to provide their platforms with as many films and television sows as possible, forcing the companies to spend billions of dollars on content.

‘The rapidly growing demand for high-quality content is one of our firm’s highest-conviction investment themes,’ Joe Baratta, the global head of private equity at Blackstone, said in a statement.

However, unlike its competitors, Staggs and Mayer’s media company will allow be free to license its content to any studio or network, something that Hello Sunshine also did.

‘The big guys aren’t licensing their content outside of their own closed walled gardens,’ Mayer explained. ‘And that’s where a scaled, independent entity like ours can really have an advantage in the marketplace.’ 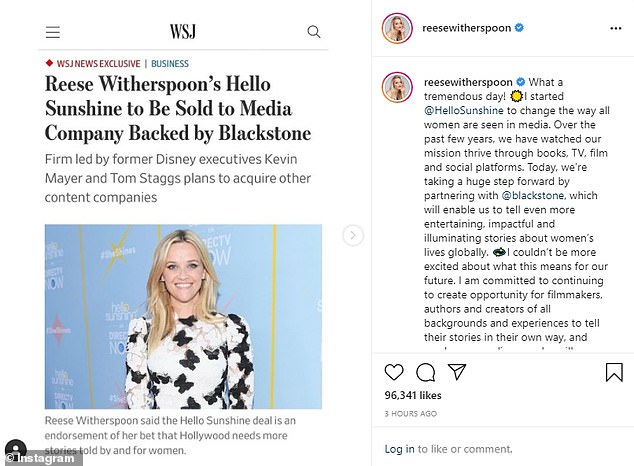 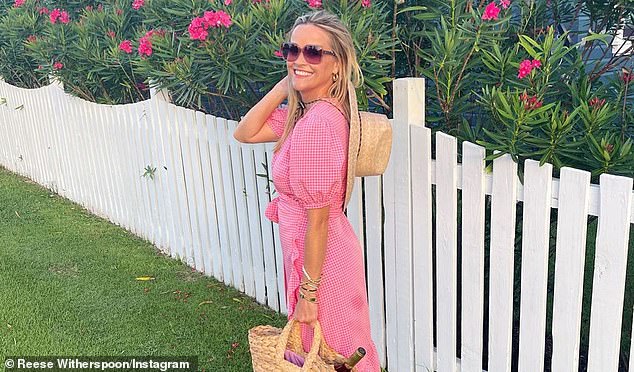 Mayer and Staggs said they are ‘thrilled’ to be partnering with Witherspoon (pictured) and note that ‘Hello Sunshine is a perfect fit for [their] vision of a new, next generation entertainment, technology, and commerce company’ 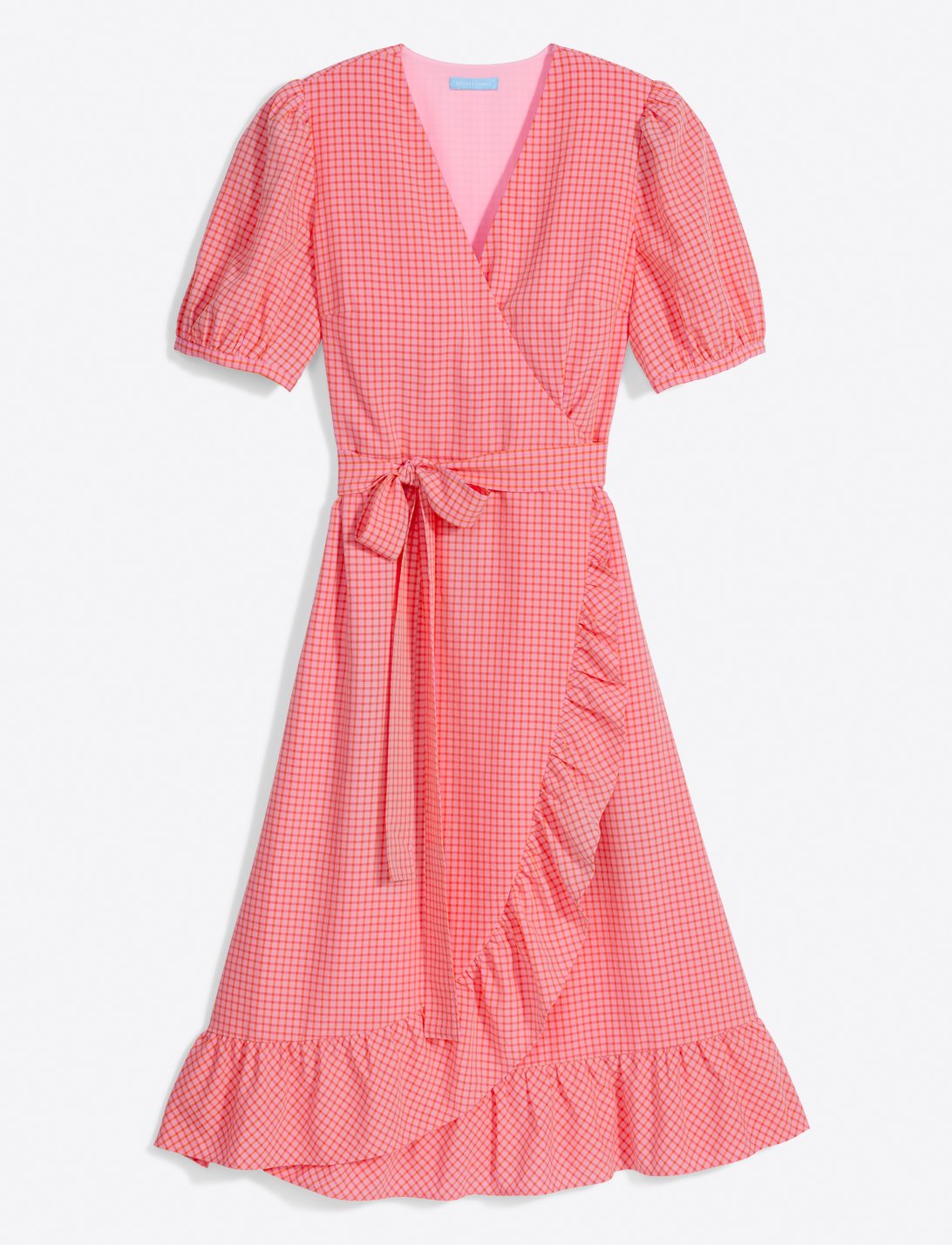 In an Instagram post Monday applauding the sale, Witherspoon shared a snap of The Wall Street Journal’s article with a caption reading: ‘What a tremendous day!’

‘I couldn’t be more excited about what this means for our future. I am committed to continuing to create opportunity for filmmakers, authors and creators of all backgrounds and experiences to tell their stories in their own way, and reach more audiences who will see that their stories matter,’ she continued.

‘This is a unique time in our world where the intersection of art, commerce and media makes it possible for these creators to tell their stories and Hello sunshine is here to put a spotlight on their amazing creations.

‘I am deeply proud of the team that us to this incredible moment, and I’m thrilled to be working with Blackstone, Kevin and Tom to grow a next generation media company. They are committed to helping our mission to empower women and the people who celebrate them. One story at a time.’

Blackstone is executing the Hello Sunshine deal through its private equity arm, allegedly spending $500million in cash to purchase shares from the current investors, which consist of Emerson Collective and also AT&T Inc.

In 2019, the private-equity giant bought a majority stake in Bumble, the dating app founded by American entrepreneur by Whitney Wolfe Herd.

In her Instagram stories, Herd congratulated Witherspoon and Blackstone on the deal, saying ‘[I] can’t wait to see what magic you create on this next adventure together.’