A building fire in Melbourne’s northern suburbs took almost three hours to bring under control and forced nearby residents to evacuate in the early hours of Saturday morning.

Sixty firefighters responded on High Street in Preston which broke out in the empty former furnishings store near the corner of Bell Street just after 3am. 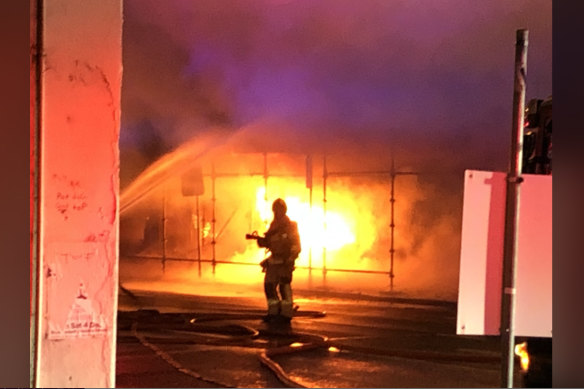 A vacant former furnishings store has been engulfed in flames overnight.Credit:Chris Vedelago

After receiving a number of triple zero calls, firefighters arrived on scene within four minutes to find the large single storey building fully alight, according to a spokesman for Fire Rescue Victoria.

Around 50 residents from an adjacent apartment complex were evacuated due to the “threat” posed by the fire, the spokesman said.

No one was injured in the blaze.

The fire was brought under control just before 6am, but crews will remain on scene in Preston to ensure the fire is completely extinguished.

North-bound lanes on High Street between Bell and Bruce streets are expected to be closed for some time on Saturday. The Department of Transport is encouraging drivers to seek alternate routes through Preston, such as Plenty Road and St Georges Road.