Richest nation or richest people? Economic supremacy in the balance 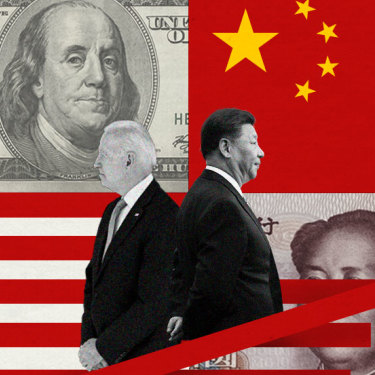 China versus the US: superpower showdown, the battle for economic supremacyCredit:Matthew Absalom-Wong

Within the next decade, the trajectories of the world’s two largest economies will collide.

One has been the world’s dominant technological, financial and cultural superpower for a century. The other is a manufacturing titan, home to the world’s largest population and increasingly its most innovative industries.

China is on track to become the largest economy in the world by 2028. It has already overtaken the US as the largest trading partner of most of its major allies and is pursuing Washington’s dominance of multilateral institutions, including the World Trade Organisation, and the financial clout of the US dollar.

“As China moves closer to the centre of the world stage, it has the ability and responsibility to play a greater role in global affairs and, together with other countries, make greater contributions to solving the problems of all mankind,” Chinese President Xi Jinping told his top political deputies on June 2. 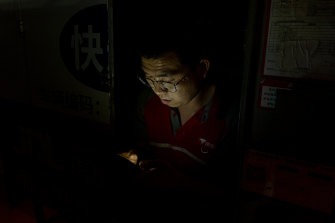 But China’s GDP per capita, which measures the size of the economy divided by the population, will remain well below the US for decades to come. When adjusted for purchasing power parity – the value of a currency relative to the cost of goods – it will only reach $25,300 by 2025 compared to $76,500 for the US, according to IMF figures.

The difference between the per capita and total output figures effectively allows China to argue it is a developing economy, securing concessions on trade policy and carbon emissions, while it becomes the largest economy in the world.

By 2035, the Chinese Communist Party wants per capita GDP to reach the level of moderately developed countries. By 2049 – the centenary of the founding of the People’s Republic of China – Xi wants China’s living standards to match those of the West.

To do this, China has made sweeping socio-economic changes, including implementing a three-child policy to reverse an ageing population.

It is also using infrastructure projects through the Belt and Road Initiative to drive influence throughout the Indo-Pacific and deliver contracts to its companies overseas, at the same time as it tells its people to produce and consume at home through its “internal circulation” strategy.

To drive domestic production and consumption, it has pumped subsidies into sectors in which it believes it needs to become more competitive, such as semiconductors. US authorities claim it has also targeted intellectual property to gain an edge over its competitors in a brutal technology race. In February 2020, FBI Director Chris Wray said 1000 investigations were open into Chinese technology theft, many of them targeting US electric vehicle and aircraft technology.

Aware that its position as the world’s economic leader is under threat after its economy was buffeted by COVID-19, Biden announced a $2.5 trillion stimulus package in January. He has since followed that up with a package worth $323 billion specifically targeted at competing with China on research, education, technology transfer, intellectual property and manufacturing. Of that, $83 billion over five years will be spent to spur the domestic manufacturing of semiconductors in the US. Another $103 billion will be spent on research into biotechnology, artificial intelligence and robotics.

There are now more Fortune 500 global companies based in mainland China and Hong Kong than in the US.

Jia Qingguo, a professor of diplomacy and international relations at Peking University, said while hostilities between the US and China have peaked in recent years, the long-term trend was one of closer cooperation.

“I think if you take a longer perspective, China and the US have been converging. There are ups and downs but if you take a 40-year perspective, during China’s policy of opening up and reform, China has changed a lot and has become a market economy with socialist characteristics.”

Evan Medeiros, a former China director at the US National Security Council, disagrees. He told the Nikkei Future of Asia conference in April that competition would be the new normal in the US-China relationship.

“No country in the world really is going to be immune from the direct or the indirect effects of US-China tensions going forward,” he said.

“You have both countries pursuing openly confrontational strategies; there is far greater tolerance for risk and friction in both Washington and Beijing. The competition is not isolated, the competition is broad spectrum.”

Veteran Singapore diplomat Bilahari Kausikan, a former ambassador to the United Nations, said suggestions the relationship was heading towards a new cold war were “intellectually lazy”.

“The US and the Soviet Union had two separate systems connected only at the margins. The US and China are both vital components of a single global system.

“Both are linked to each other by a web of supply chains of scope, density and complexity never before seen in the history of the world economy. Their competition is to determine who will dominate the single global system.”