Rishi Sunak tops first poll, but is he losing momentum?

Rishi Sunak tops first poll, but is he losing momentum? Tory leadership hopeful is accused by rivals of ‘underperforming’ in his campaign

Rishi Sunak was last night accused by his rivals of ‘underperforming’ in his bid to become prime minister.

The Tory leadership hopeful came top in the first round of voting, but he was backed by 88 MPs – fewer than expected.

In contrast to Boris Johnson in 2019, he held only a narrow lead over the next best, Penny Mordaunt. She took 67 votes while Liz Truss was third with the backing of 50 MPs. 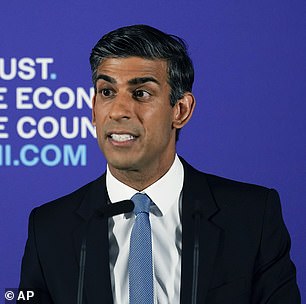 Rishi Sunak, 42, came top of the first round of voting in the Conservative leadership contest with 88 MPs voting for him

Rival campaigns were quick to point out that Mr Sunak was ‘way behind’ Mr Johnson at the same point in the last leadership contest three years ago.

Then, the PM secured 114 votes in the first round while Theresa May reached 165 votes in 2016. A Cabinet source said: ‘Rishi has underperformed. Way behind Boris at this point. MPs will realise he has almost no chance of winning with the membership… so what’s the point of putting him through?

‘There are shades of Portillo 2001 and he might not make final two.’

Another rival campaign source said: ‘Rishi Sunak is losing momentum. Boris Johnson and even Theresa May did better in the first round in the last leadership contests.

‘If he faces the members he’ll lose, but now it’s looking like he might not even get to that point.’

Health Secretary Steve Barclay became the latest big-name backer for Mr Sunak, saying ‘he has all the right attributes to take our country forward’. Mr Sunak has also received the support of a string of Tory big hitters, including Dominic Raab and Grant Shapps. But yesterday a head-to-head poll of Tory grassroots members suggested Mr Sunak would lose to every candidate except Jeremy Hunt, who has been eliminated. 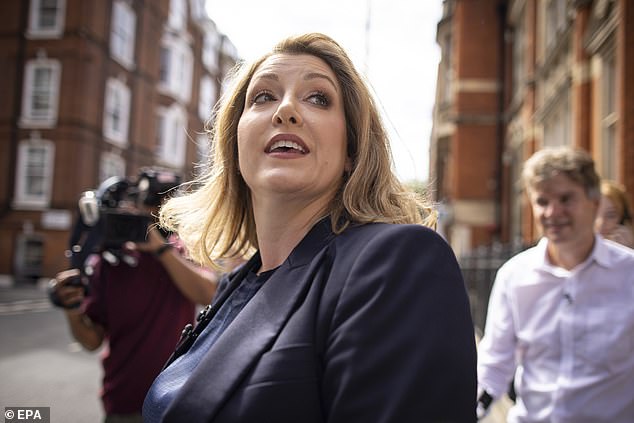 Penny Mordaunt, 49, came a close second in the vote, securing the support of 67 MPs. A YouGov poll said she would decisively beat Rishi Sunak if both made it to the final two

According to the YouGov poll, Penny Mordaunt would secure 67 per cent of the vote if she was in the final two with Mr Sunak. Liz Truss, Tom Tugendhat and Kemi Badenoch would also beat him.

YouGov also asked Tory members which candidate they most wanted to replace Mr Johnson – and Mr Sunak secured just 13 per cent of the vote, behind Miss Mordaunt and Miss Badenoch.

However, another poll suggested Mr Sunak remained the favourite candidate among the public, with his rivals lacking ‘name recognition’.

According to Ipsos, 37 per cent of the public think the former chancellor would do a good job as prime minister, making him the only leadership candidate with a higher rating than Labour leader Sir Keir Starmer on 33 per cent.

Brexit opportunities minister Jacob Rees-Mogg yesterday continued his attack on Mr Sunak for having implemented ‘economically damaging’ policies. He said yesterday that Miss Truss was ‘fiscally on the right side of the argument’, unlike her opponent Mr Sunak, who was responsible for ‘endless tax rises’.

He told Sky News: ‘She’s been very good with the Prime Minister in leading on Ukraine and making sure we had a strong response to Russia.

Mr Sunak came under fire this week for trying to leave the stage without taking a question from a journalist.

Six candidates won enough votes from Conservative MPs to make it through to the next round, while former Foreign Secretary Jeremy Hunt and Chancellor Nadhim Zahawi were eliminated

… as Zahawi and Hunt crash out of running

Two more of the senior Tories who turned against Boris Johnson were humiliated last night as they crashed out of the leadership contest.

Newly appointed Chancellor Nadhim Zahawi and former health secretary Jeremy Hunt both failed to get enough support from MPs to take them through to the second round of voting.

It came the day after Sajid Javid, whose resignation from the Cabinet a week earlier had triggered the Prime Minister’s downfall, failed to make the ballot.

Yesterday’s result was particularly embarrassing for Mr Hunt as he received only 18 votes from Tory MPs, well below the 30 threshold needed to reach the next round of voting and fewer even than the nominations he had received the day before.

In a statement afterwards, he hit out at the ‘smears and attacks’ of the contest – even though last month he publicly voted against Mr Johnson in the confidence vote.

His campaign had been dogged from the start by questions over his finances. MPs also said he showed poor judgment when he accepted a dramatic promotion to Chancellor last Tuesday evening only to then publish a letter telling the PM he had to quit less than 36 hours later. 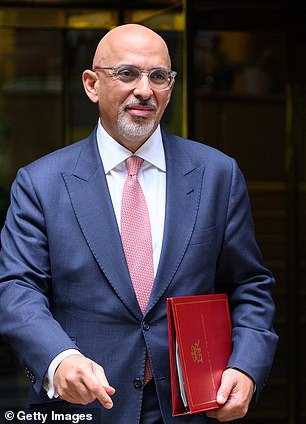 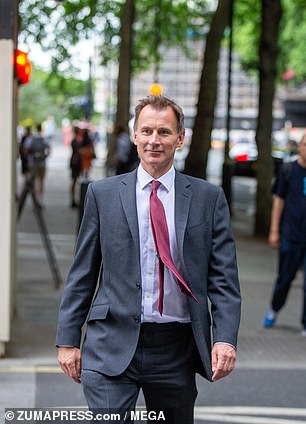 Nadhim Zahawi, 55, (left) Chancellor for just a week, and 2019 Tory leadership runner-up Jeremy Hunt, 55, (right) were both knocked out of the contest after failing to win the support of enough MPs