Rob Gronkowski insists that he’s done with football. Those closest to him aren’t convinced.

First, it was his agent Drew Rosenhaus, who told ESPN’s Adam Schefter in June that “he wouldn’t be surprised if Rob comes back during the season or next season.” Now it’s Gronk’s girlfriend.

Camille Kostek addressed her boyfriend’s retirement status while speaking for a Sports Illustrated Swimsuit feature published on Monday. She’s not buying it.

If you’re counting, that’s Gronkowski’s business confidante and his closest personal partner betting on his return to the football field. What does Gronkowski have to say? He’s answering Brady’s phone calls if the Tampa Bay Buccaneers quarterback reaches out. But he won’t be convinced to return to the NFL.

Rob Gronkowski on his transition from football to business, and declaring he will remain retired even if Tom Brady calls … this morning at @iceshakerbottle event in Boston. pic.twitter.com/8pHAOufklX

“I’m done with football and I’m stepping my feet into the business world, the business ventures and seeing where I can find my place,” Gronkowski told ESPN’s Mike Reiss last week. …

“I would obviously answer the greatest quarterback of all time and ask him how he’s doing and tell him I’m doing good. But I wouldn’t go back to football, no.”

So, is Gronk really retired?

Gronk surely understands if the public — and those closest to him — don’t necessarily take what he says too seriously. It’s part of his charm. Also, Gronkowski’s stepped out of retirement before for the chance to play again with Brady. The decision paid dividends with a fourth Super Bowl ring.

Meanwhile, Gronkowski’s decision to wait deep into the offseason to announce his retirement raised speculation that his heart might not be into calling it quits — that it could be part of a larger negotiation ploy with the Bucs. Also, Brady unretired, so why not Gronk? 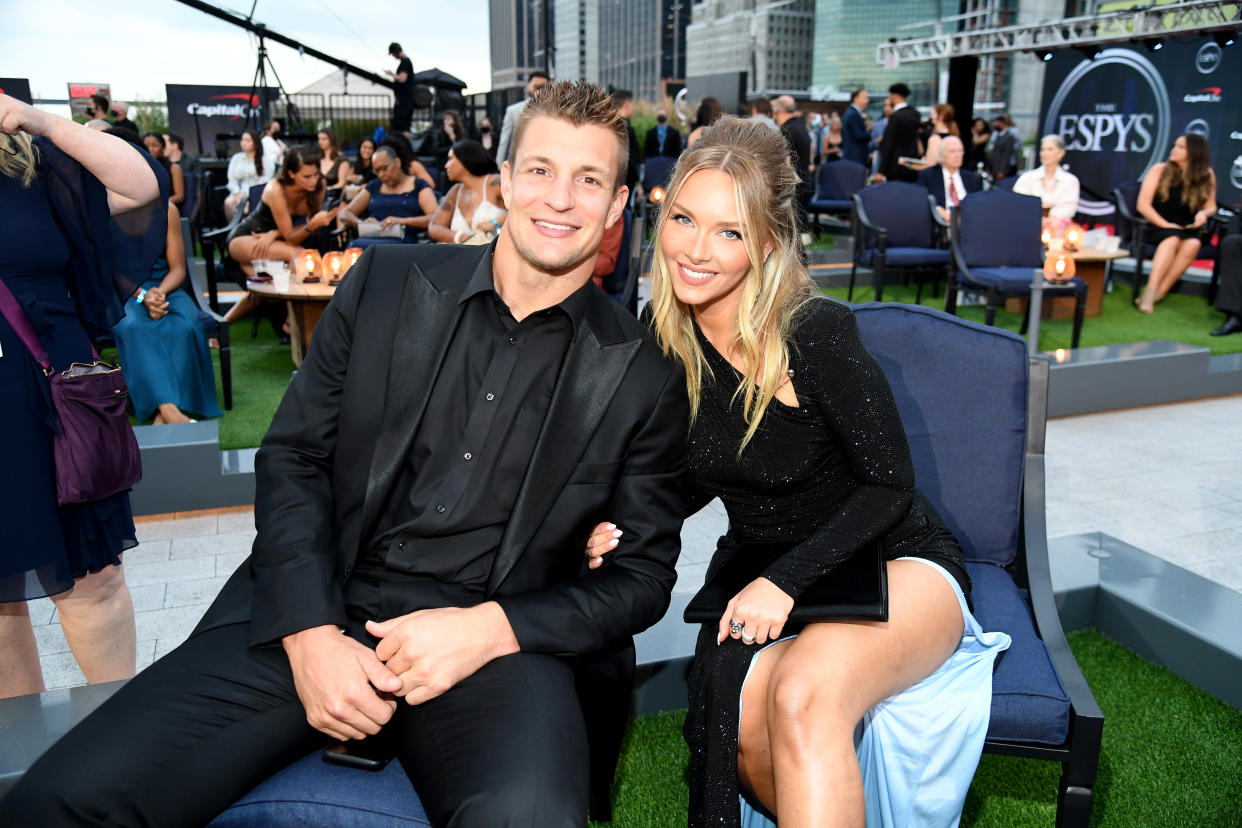 On the other hand, Gronk has all the reasons in the world to stay off the field. There’s nothing left for him to accomplish in the NFL. He’s a four-time Super Bowl champion stepping away from the game as the greatest tight end to ever play. If he truly is done, his invitation to Canton should be waiting in five years.

At 33 years old, he’s done significant damage to his body with concussions, broken bones and ligament tears among the ailments to sideline him during his career. Meanwhile, he’s been wise with his money. Gronkowski confirmed reports in 2018 that he hasn’t touched any of the salary he’s made in the NFL, that he’s instead lived off his endorsement money. If true through 2021, that means Gronkowski’s stockpiled $70-plus million in career salary that he’s presumably put to work in investments.

And, like he said to Reiss, he’s got other business ventures to pursue. He appears to be in no dire need of a paycheck.

So what will Gronkowski do? It remains a matter of wait-and-see even if Gronkowski insists that he’s done. If Week 1 arrives and he’s not in a Bucs uniform, only then will folks truly start to believe that he’s actually called it quits.