ROLAND WHITE: How we'll miss GB sticker that was our licence to thrill

Oh, how we’ll miss the GB sticker that was our licence to thrill! As it’s replaced with the UK logo, ROLAND WHITE takes a gloriously nostalgic tour of European adventures long past

Some forty-plus years ago, I was travelling through Italy in my Morris Minor 1000 and listening to a football match on the radio. As we approached a level crossing, the gates came down — and someone scored.

It was only after the gates opened and we were crossing the tracks that he finally surrendered to his bursting lungs and finished with a flourish: ‘…… oooooooooLAZZO!’

It was my first motoring trip abroad and we seemed to be the only car for miles. Listening to a match in Italian as we negotiated Tuscany’s winding roads — in a right-hand drive vehicle on the ‘wrong’ side of the road — was all part of the romance of driving on ‘the Continent’.

And a large part of that romance was symbolised by the ‘GB’ sticker, displayed with modest pride on the back of the car. Even James Bond had one on his Aston Martin.

Now it looks as if the famed GB logo has reached the end of the road, if you’ll pardon the inevitable pun. 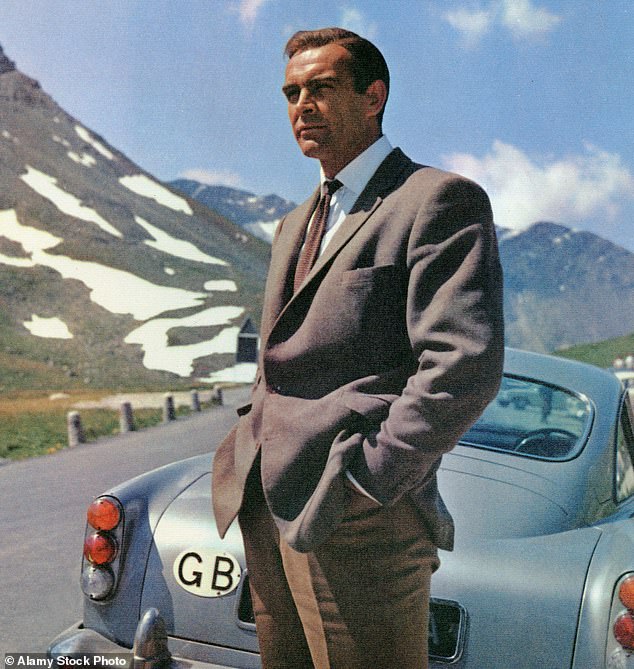 A large part of that romance was symbolised by the ‘GB’ sticker, displayed with modest pride on the back of the car. Even James Bond had one on his Aston Martin

In what is being described as a blow to Britain’s motoring heritage, it has emerged that, from September, drivers travelling abroad can no longer display ‘GB’ on stickers or number plates but must display a ‘UK’ sticker (or number plate) instead.

The change — just six months after the EU ‘stars’ logo on our number plates were replaced with the Union Jack following Brexit — is a gesture of inclusivity towards the people of Northern Ireland, which is not part of Great Britain.

But it is being condemned as a waste of time and money by MPs and the AA — one of whose members is reported to have discovered the change, which has not yet been formally announced, by chance.

Apart from any nostalgic feelings about the famed ‘GB’, it is a blow for businesses that supply the stickers. The AA says it has 50,000 in stock, all now worthless.

‘We might be seeking compensation from the government on behalf of some of the suppliers because they are being left in the lurch,’ says Edmund King, the president of the AA.

The GB sticker dates back to the 1949 Geneva Convention on Road Traffic, which set out the rules of international motoring.

From the moment those rules were first applied in 1952, drivers travelling abroad had to display a sticker on the back of their car to identify their country of origin. Not just any old sticker either: the letters had to be black on a white ellipse background.

No doubt this was a great asset to international police forces and customs officials everywhere, but it also introduced a new game for children: sticker spotting.

For decades, many a long journey in the backs of crowded family saloons was passed looking out for stickers from other countries — the more exotic the better. CH, Switzerland; IS, Iceland; GBG, Guernsey. FL, Liechtenstein.

Mock if you like, but it was something to do once we’d got bored with our I-Spy books. 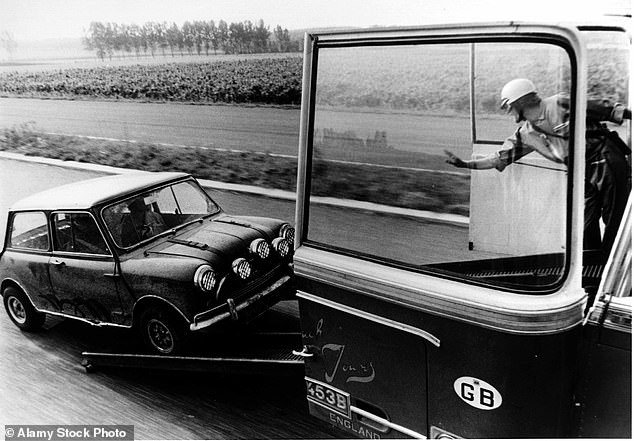 Symbol of romance: The GB plate in the 1969 film The Italian Job

In the aftermath of Brexit, the GB sticker has become something of a political issue, but back in the 1960s it was a symbol of liberation.

Placing that GB sticker on the back of your car was the very first step on an exotic adventure that usually involved a cross-channel ferry and camping sites with challenging sanitary facilities.

And as foreign travel was still relatively expensive, that sticker was also something of a status symbol, too. In those days, European motoring did seem very glamorous. It was Bond in that Aston Martin snaking up a Swiss mountain pass. It was Nanette Newman in a red Sunbeam Alpine convertible, being driven along the Corniche with the wind blowing through her hair.

Meanwhile, ordinary families were excitedly loading up the estate car or the VW camper van.

In 1959, when writer David Nicholson was six, he and his family set off from County Durham for a holiday in France. He can still recall the warm welcome they got everywhere — and all thanks to their GB plates.

‘Continental travel was still a big adventure, and GB plates still a novelty for the French to see,’ says Nicholson. ‘Everywhere our car was seen elicited cheerful waves.’

In restaurants, a GB plate often meant Le Patron refused payment in gratitude to wartime allies. Of course, the GB plate wasn’t welcome everywhere, as the Nicholson family were to discover when they went camping in West Germany in 1966, just days after the World Cup Final.

Applying a GB sticker was only one of the rituals of a driving holiday abroad. For years, travellers to France had to put yellow strips on their headlamps so that French motorists wouldn’t be dazzled by the vulgar glare of Les ‘eadlamps Anglais.

And let’s not forget there were different road signs to memorise.

The architectural consultant Hugh Pearman, 66, remembers crossing the Channel in the summer of 1962 in the family’s Austin A50, with an RAC guide to French road signs stuck to the inside of the windscreen. His father also had a handful of typewritten sheets carrying directions from Tunbridge Wells to Combourg in Normandy, again provided by the RAC.

‘We arrived at Dunkirk as dawn broke,’ Pearman recalls. ‘On the quayside, the first things I saw were a man wearing a beret riding a bike with a baguette under his arm, and a Citroen 2CV. I’d never seen anything like these before.’

The trip nearly ended very badly when the car skidded off a wet road and into a ditch. The family were unhurt, and managed to flag down a passing farmer.

‘The local garagiste hammered out the worst of the damage and taped thick clear plastic where the side windows had been,’ says Pearson. ‘My father liked driving around in it, as nobody in Normandy had previously seen such a car.’ 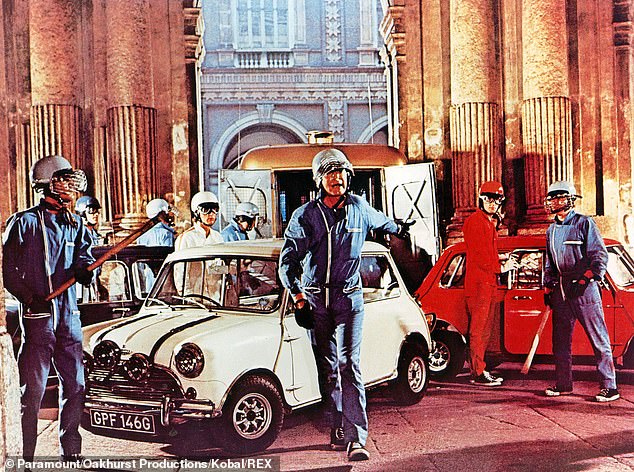 The GB sticker will be quietly mourned by motorists of a certain age — and anybody who has found themselves in Rome in a Mini Cooper imagining, for one brief moment, that they were in The Italian Job

Even if you managed to steer clear of the ditches, driving in Europe could be something of an adventure. Designer Rowena Hart, 61, recalls her surprise at some of the local habits during a trip to France. ‘We were delighted, in our slightly old-fashioned British way, that French people used to pee at the side of the road.

‘There’s another!’ we would shout, and my dad would slow down the car and film them with his cine camera.’

The French got their revenge in the end. The Harts parked their Hillman Minx and caravan on the quayside at Le Havre the night before their return ferry was due to leave.

‘There was an awful lot of suspicious banging and crashing in the night,’ recalls Hart. ‘In the morning, we discovered that the French had put up a funfair all round us. Whether they saw our GB plates and wanted to annoy us, or whether they knew we were British and therefore mad and wouldn’t mind, I have no idea. Anyway, they let us out after breakfast.’

It’s sometimes difficult to remember how we managed before the age of the satnav. Years ago, I travelled with a friend to stay at her boss’s holiday home near the French city of Limoges.

The house was in a remote village, but he’d written out clear directions for us on a piece of paper.

We were travelling in a VW Golf Convertible, and in the Calais sunshine couldn’t resist putting the roof down. That was perhaps our first mistake.

Nervously navigating my way through the port’s many roundabouts, I asked my companion if she had the directions.

She produced them from her handbag — and they promptly blew away in the breeze. It’s a very long drive to Limoges when you’re a bit lost and very cross.

So will British drivers feel any different when they are racing down the autobahn with their regulation UK stickers or number plates? Almost certainly not.

But the GB sticker will be quietly mourned by motorists of a certain age — and anybody who has found themselves in Rome in a Mini Cooper imagining, for one brief moment, that they were in The Italian Job.

How, M, ROLAND, well, White
You may also like: