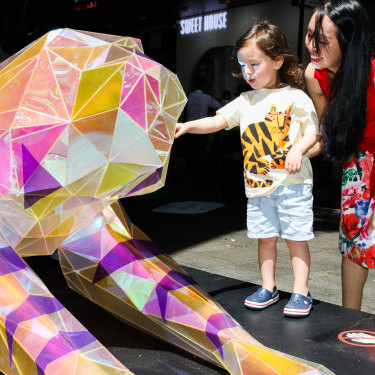 Chinese-Australian artist Susan Chen with her son Thomas at a lunar new year event in Sydney in January. Credit:Renee Nowytarger

The journey from Melbourne’s multicultural heartland in Wyndham Vale, in the city’s outer west, to the whitest town in Australia, Warrnambool, on Victoria’s south-west coast, takes just two hours and 45 minutes by car. But if you choose the overland route you will miss the biggest twist between these two poles of our national identity.

Add another hour or so to the trip by going through Victoria’s second city, Geelong, and follow the scenic route to Warrnambool via the Great Ocean Road, and you will be greeted by vibrant local-born communities that have had their numbers boosted by an exodus from the capital during lockdown. 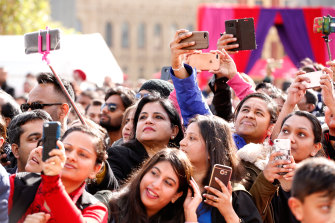 Our ethnic face shifts at each signpost in the journey from new to old Australia. Almost 80 per cent of Wyndham Vale is first or second-generation migrant, and the largest group are the Indian-born, who make up 18 per cent of the suburb’s total population. In Geelong, the migrant figure drops sharply, to just 35 per cent, with the English-born accounting for 3 per cent of the total and Indians less than 2 per cent. Diversity falls further at the Surf Coast and Bellarine Peninsula, where 31.5 per cent are new Australia, and the top five migrant groups are all white – from England, New Zealand, Scotland, Germany and South Africa. In Warrnambool, the new Australians are below 20 per cent.

The surprise is that Geelong has been one of our fastest-growing cities or towns over the past five years, while the lockdown boom on the Surf Coast and Bellarine Peninsula has seen townships like Lorne run out of accommodation for workers in the services sector. Both areas have relied on internal migration from Melbourne and the rest of Victoria to maintain their old Australian identity. But the local-born tide runs out by the time you reach Warrnambool, where the population has stagnated.

The separation repeats when you travel 2.5 hours north from Auburn, in Sydney’s diverse south-west, to NSW’s second city, Newcastle.

The history we made on Tuesday with the confirmation that Australia is a majority migrant nation – the first English-speaking nation to achieve that title – contains identity twists that run across the capitals as well.

The 2021 census showed that Melbourne and Sydney became more diverse than the nation at large when compared with 2016, even though the pandemic triggered the departure of overseas migrants, most notably from China. Meanwhile, Brisbane became less diverse thanks to the cross-current of internal migration from the southern states. It remains the only large Australian city that is not yet majority migrant.

We have not been here before as a Commonwealth. The last time more than half our population was born overseas or had at least one migrant parent was in the 1890s, when we were six separate colonies of the British Empire.

And we have never looked more different. It didn’t matter where you lived in the 20th century, because the migrant waves landed in roughly the same order. The English were the largest group across all eight capitals and in the regions. Now five of our eight capitals have someone other than the English at No. 1 – the Indians in Melbourne and Canberra, the Chinese in Sydney, New Zealanders in Brisbane and migrants from the Philippines in Darwin.

But the most remarkable part of the story is how easily people accepted our official status as a majority-migration nation. There was no echo of the 1990s backlash, when John Howard led the Coalition into government in 1996 with a promise to revive the traditions of old Australia and Pauline Hanson complained that we were being swamped by Asians. In fact, the census reaffirmed what voters demonstrated on May 21, when they elected a parliament that suddenly looks more like the people it serves – more female, and more ethnically diverse. 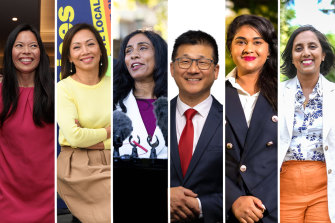 Australian statistician Dr David Gruen says the idea of multiculturalism has been with us for some time now, and crossing the threshold to majority migrant was the inevitable result of decades-long demographic trends. “This is just a further dimension of that,” he told The Age and the Sydney Morning Herald.

While the formal date for the changing of the guard between old and new Australia was August 10, 2021, when we filled in our census forms under the pall of the Delta wave of COVID-19, the milestone was actually achieved in 2018, when the national population reached 25 million and Melbourne, our fastest-growing city or town at the time, hit 5 million people.

The census leaves out the detail of what happened in those intervening three years, as the migrant waves peaked in 2019 and then receded as the international border was shut in March 2020. More than 100,000 migrants left Australia in net terms between the March quarter of 2020 and the September quarter of 2021, according to separate ABS data released on census day.

The exodus from Australia, and the cross-currents of internal migration, intersected in a once-in-a-century fall in the populations of both Melbourne and Sydney. Victoria was still 23,000 people short of its pre-pandemic numbers at the end of last year, despite notable exceptions like Geelong and the Surf Coast. NSW recovered the last of its losses in the December quarter of 2021.

The contradiction of Melbourne and Sydney as shrinking but increasingly cosmopolitan came despite the loss of one of the great drivers of population growth for the big two: students and skilled migrants from mainland China.

The Chinese-born were the migrant group most likely to depart, or prove unable to make it home to Australia, when we isolated from the world in 2020. The exodus was felt most keenly in Sydney and Melbourne, where more than 70 per cent of all the Chinese-born in Australia live. But it extended to Perth, Adelaide and Canberra.

Across these five capitals, which are all majority migrant now, the Chinese share of the total population fell for the first time since the White Australia Policy was introduced at federation in 1901. This is based on exclusive data from the census prepared in collaboration with the ABS and supported by the Judith Neilson Institute for Journalism and Ideas.

A resumption of the Chinese migration wave now the border is reopened is unlikely while diplomatic relations with Beijing remain in deep freeze and President Xi Jinping is pursuing a COVID-zero policy at home. But as one Asian wave recedes, another is set to change our identity over the remaining decade.

Migrants from India had already overtaken the Chinese to be our second largest overseas-born community before lockdown. The trajectory of Indian migration slowed but was not reversed by lockdown. This is seen in the 48 per cent increase in the Indian-born population between the 2016 and 2021 censuses, after a 54 per cent boom between 2011 and 2016.

A repeat of those growth rates would push the Indian-born population in Australia towards 1 million at the next census in 2026, and overtop the 930,000 English-born recorded in 2021. History will truly be made at that moment because the English have been our largest migrant community since Arthur Phillip planted the British flag at Sydney Cove on January 26, 1788.

But there is something even more remarkable happening to our sense of self. It was one of the first things Gruen noticed when he pored through the census results.

The number of people who identify as Aboriginal or Torres Strait Islander is accelerating, and that trend is driven by young people. The total number jumped by 18 per cent between 2011 and 2016, from around 550,000 to 650,000, and by 25 per cent to more than 800,000 over the past five years. If these growth rates are matched at the next census, the Indigenous population will reach one million, and surpass the English-born before the Indian-born become our largest migrant community.

The last time First Australians outnumbered English-born settlers across the continent and Van Diemen’s Land was in the 1820s.

Perhaps we are clearing the final hang-up of our national identity with these numbers. As Old Australians learned to celebrate their convict heritage in the second half of the 20th century, First Australians are increasingly comfortable in their own skin in the 21st century.

The family tree measures those who nominated a place of birth in the census. Old Australians have seen their share drop from 52.9 per cent in 2011 to 45.8 per cent 10 years later. The “branches” of New Australia expanded from 45.9 per cent to 50.8 per cent over the same period, while the First Australian “roots” grew from 2.7 per cent to 3.4 per cent.

In Sydney, Perth and Melbourne, the New Australian branches range between 63 and 67 per cent of the family tree, while in Brisbane they form 49 per cent. These distinctions were reflected at the last federal election, when Scott Morrison’s Liberal Party was wiped out in the three most cosmopolitan capitals. The Liberals held 24 seats across Sydney, Melbourne and Perth going into the campaign and lost 14 of them. In Brisbane, the Liberal National Party ceded two of its six seats.

The new Labor government of Anthony Albanese holds 54 of its 77 seats in the capitals. While Labor presents a more Eurasian face to the world, with a prime minister of Italian heritage and the Malaysian-born Penny Wong as foreign minister, the Coalition at home is now much whiter than the nation. The Peter Dutton-led opposition is the representative of Old Australia; 41 of its 58 seats are in the regions.

The political challenge posed by our rich and complex diversity is the flipping of the city-country divide, with New Australia lording it over Old Australia. The best way to avoid polarisation will be to find a new unifying story for the 21st century. The answer may well be in the roots of our family tree, and the Uluru Statement from the Heart. 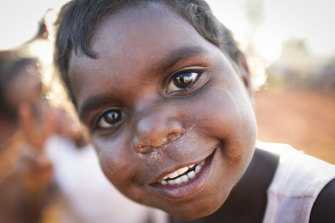 The opportunity to redefine our nation in terms of its oldest human community awaits us.Credit:Alex Ellinghausen

If the referendum for inclusion of an Indigenous Voice in the constitution is passed next year, as Labor hopes, it will allow us to cross the next threshold of identity, as First Australians reach a population of 1 million with the same ease as we learned this week that we are a majority migrant nation.