Rush of Afghan evacuees to Qatar leaves many crammed in hot hangar, facing an uncertain future

Doha: The crush of civilians fleeing Afghanistan has threatened to overwhelm the air base here where most have been flown, leaving many evacuees crammed in a sweltering hangar without adequate toilets and showers as US officials scramble to expand capacity and open new receiving points in the Middle East and Europe.

The military temporarily halted flights from the still-chaotic Kabul airport on Friday when conditions at the Qatari base threatened to reach dangerous levels. Civilians inside the base said some people had been moved to trailers and tents in other parts of the facility and others boarded onward flights to processing facilities in the United States and elsewhere. Flights to Doha had resumed by Friday night.

“I haven’t slept for four days and four nights,” said Sayed Harris Khelwati, 31, who arrived on Wednesday night on an American C-17. “There aren’t cots for everybody. You just lay down where you can.”

Khelwati, who was reached by phone on Saturday, said conditions had grown more dire as arrivals poured in faster than officials could move them through. He posted a video showing nearly every square foot of the massive structure packed with people sitting, squatting and laying among their plastic bags and luggage.

At various times, some evacuees tried to rush to the front of processing lines as military personnel struggled to maintain order with megaphones, he said. At the peak of crowding on Friday night, when it was still 34.5 degrees outside the metal hangar, some evacuees held up signs reading “I can’t breathe,” he said.

“We’re really grateful to the soldiers,” Khelwati said. “But there’s just a lot of frustration. You lose your country, and some people got here without even a backpack. We don’t have any information about where we’re going or when.”

Conditions had eased slightly on Saturday, he said, seemingly from a combination of faster processing and the slowed flow of new arrivals. 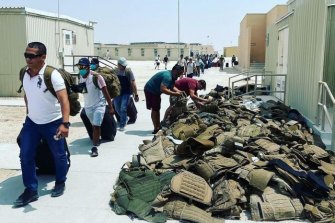 An image posted to Instagram by renaissance_rug_cleaning, captioned “Made it out of Afghanistan to an air base in Qatar with many other people. All is well considering the situation. #afghanistan #kabul” Credit:Instagram

The chaos reflects the degree to which the American government was caught flat-footed by an operation that Joint Chiefs of Staff Chairman General Mark A. Milley described this week as one of the largest civilian evacuations in US military history. President Biden said on Friday that some 13,000 people have been airlifted from Afghanistan since August 14, on top of 5000 in the two previous weeks as Taliban forces carried out their lightning takeover of the country. The flow is expected to continue for weeks. 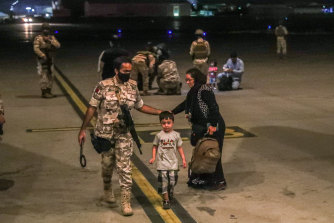 A member of the Qatar Air force walking next to a boy evacuated from Afghanistan, at Al-Udeid airbase.Credit:AFP

Officials are straining to beef up capacity of all stages of the evacuee processing system, looking for additional places to land the Afghans they fly out of Kabul, personnel to process them and then secondary locations to take them to.

Bill Urban, a spokesman for US Central Command in Tampa, said officials are working with other military bases, the State Department, Customs and Border Protection and third countries to find other places to house the evacuees. They are also rushing more material to the Qatar base, including sanitation facilities and air-conditioned tents.

“It’s a dual effort of improving the conditions there and moving people onward as quickly as possible,” he said.

A backlog at any stage of the global chain risks sparking a humanitarian collapse or violence. Friday’s pause in evacuations, for example, quickly added to the crowding in Kabul, with more than 10,000 people packed into the military side of the airport at one point early on Saturday, according to a person working with the US government to co-ordinate the evacuation. A Defence official, speaking on the condition of anonymity because of the sensitivity of the issue, said the number of evacuees at the airport grew from about 10,000 on Friday but declined to say how much larger the crowd was on Saturday.

Officials closed the gates leading to that section of the airport before planes resumed taking off, said the person working with the US government on the evacuation, who spoke on the condition of anonymity because he was not authorised to comment. It was unclear whether the gates had been reopened later on Saturday.

The US government official said the gates have been intermittently closed because the airport reached capacity. But, he said, “we had procedures in place to receive any American citizens who made it to the gate and notified us of their location”.

Bahrain announced on Friday that its Isa Air Base will begin receiving evacuees, and the United Arab Emirates said it would temporarily house 5000 Afghans at Washington’s request. The US Ramstein Air Base in Germany tweeted photos of their own preparations for incoming Afghans.

In Doha, officials are trying to load outbound planes to the United States or third countries to keep pace with those landing from Kabul. At least some of the flights have landed at Washington’s Dulles International Airport.

For now, the first stop for most Afghans fleeing Taliban violence remains the hangar in Qatar. Coming on crowded military flights, many have arrived without belongings or even passports. Those with US passports were moved through the fastest, according to journalists who witnessed the process, with some being put on buses for outbound flights almost immediately.

For others, the process has been slower. Many of those waiting had been in the final stages of securing a Special Immigrant Visa, an expedited path to immigrate to the United States reserved only for those who worked for the US military or government in Afghanistan.

Khelwati, an IT worker from Virginia who had been visiting family in Afghanistan, holds a US green card. He was not able to move through the evaluation system for days until Friday, when the pace of processing picked up, he said. After lining up at 6pm, he was interviewed and fingerprinted by 4am on Saturday. He was then moved to a second hangar, less crowded and cooler, to await a flight out.

For some, the discomfort and the waiting was made worse by what they had left behind. Their livelihoods and homes were suddenly lost, and in some cases so were their families.

When Samiullah Nasiri, 30, walked into the hangar on Wednesday, he immediately began looking for his wife and kids. They had been separated at a Taliban checkpoint near the airport when his wife was too afraid to proceed. She told Nasiri, who was in danger because of his work at a housing compound for Americans and other foreigners, to go ahead. He had hoped she would find another way.

“I cried the entire plane ride,” he said, standing by the registration table with his children’s ID cards, his shirt still bloody from a tussle with a Taliban fighter. He could find no sign of them.

“Today my heart was broken,” he said.

Afghan, evacuees, of, Qat, rush, to
You may also like: