The move comes amid deepening tension over Western fears Vladimir Putin is plotting an imminent invasion of his neighbour. 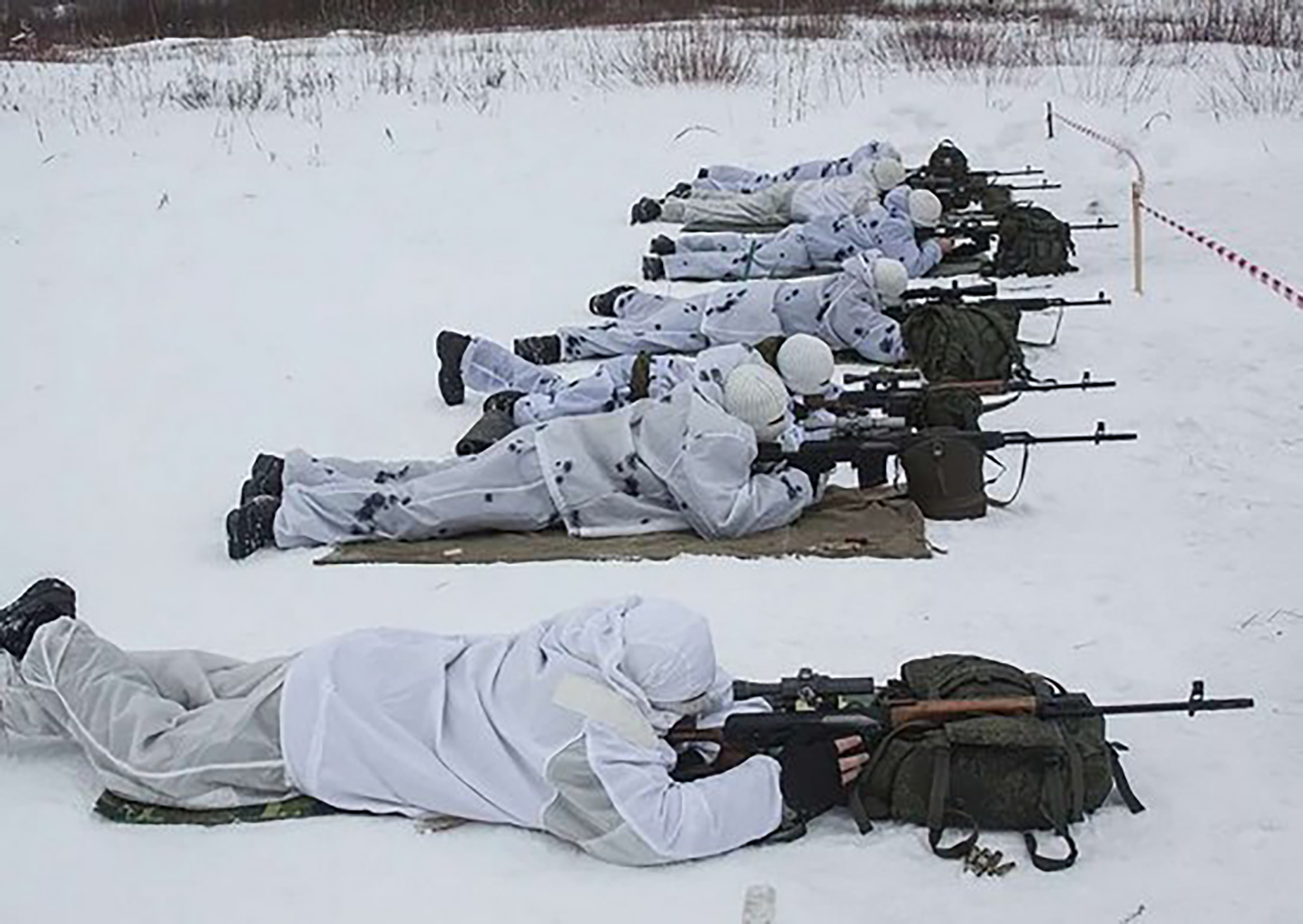 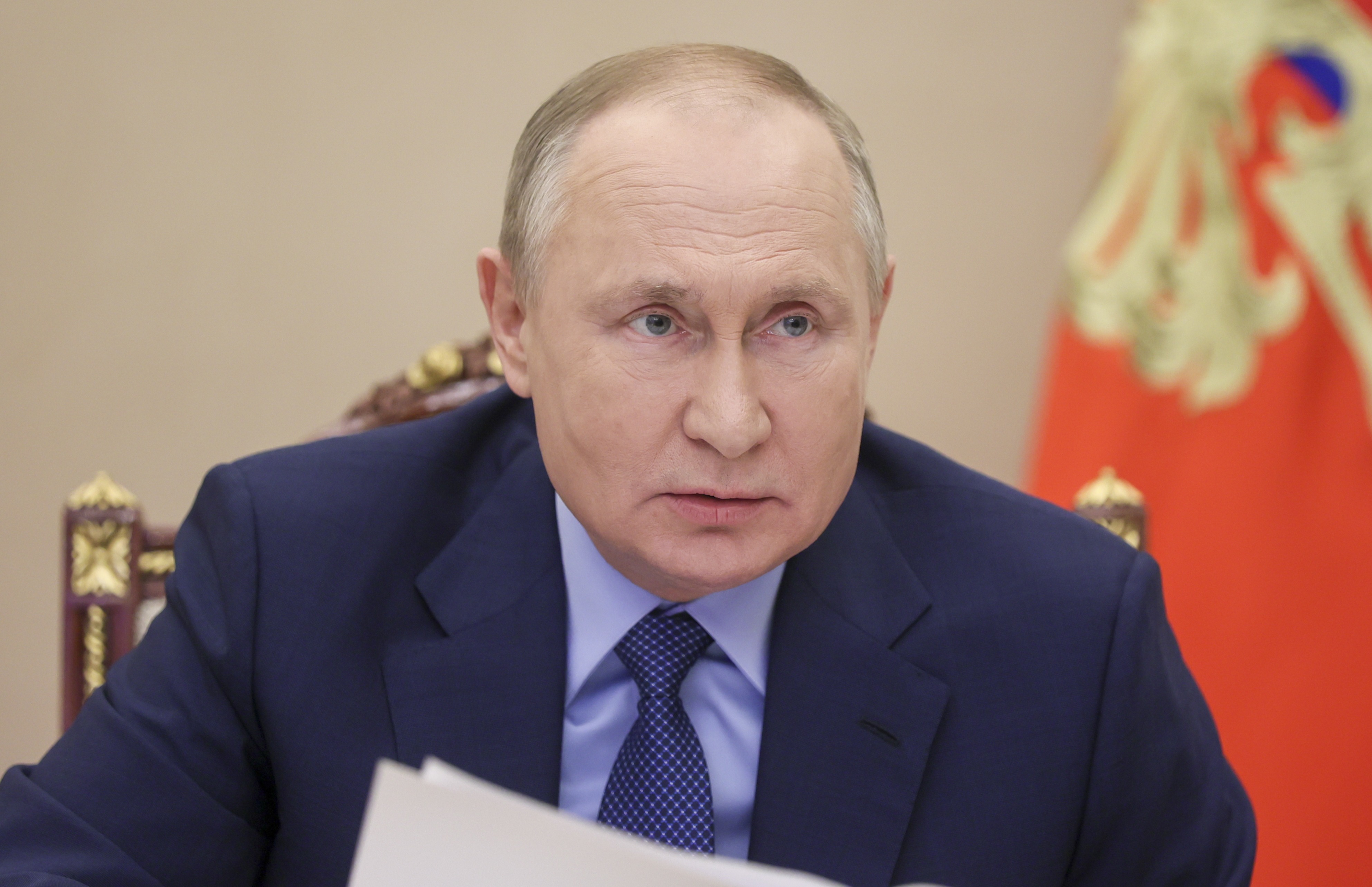 It comes after Russia has warned war is "highly likely" with Ukraine following orders to troops to remain "combat ready" after speculation of a Ukrainian invasion.

The Kremlin has said that Kiev's desire to retake Crimea is "direct threat", as the US vows to respond following growing reports of a Russian invasion.

Three of the four regions with the giant sniper exercises share borders with Ukraine.

More than 700 sharpshooters are being schooled in camouflage of firing positions and countering the enemy.

A Russian military spokesman said: "Servicemen from the sniper units of the Western Military District's combined army have begun to conduct large-scale exercises as part of a training camp in Voronezh, Belgorod, Bryansk and Smolensk regions."

The snipers are also exercising in both long distance shooting and hand-to-hand combat.

Interfax news agency reported that the sniper drills come as Nato has expressed concern at the continuing build-up of Russian troops close to the border with Ukraine.

The Kremlin had “dismissed” this and expressed its own concern about "provocations" by Ukraine’s armed forces on the frontline of Donetsk and Luhansk, the two pro-Russian separatist regions.

"The architecture of strategic stability is rapidly being destroyed, Nato refuses to constructively examine our proposals to de-escalate tensions and avoid dangerous incidents."

The nightmare scenario of military confrontation is returning

A senior Moscow senator Vladimir Dzhabarov has warned that Russia may send in its troops to support half a million Russian passport holders living in these two rebel held regions, also known as Donbas.

Dzhabarov, deputy chairman of the upper house of parliament’s International Affairs Committee, said: "We may look at this matter in the event of a direct appeal, and if there is a threat to the lives of the people.

"Half a million citizens of Donbass [Western Ukraine] have become Russian citizens.

“Of course, we cannot abandon our compatriots.”

He added: “I hope it doesn't come to that, and that it will be possible to resolve this matter in some kind of peaceful way after all.”

Russia claimed today its radars had tracked over 30 foreign spy planes near its borders in the past week. 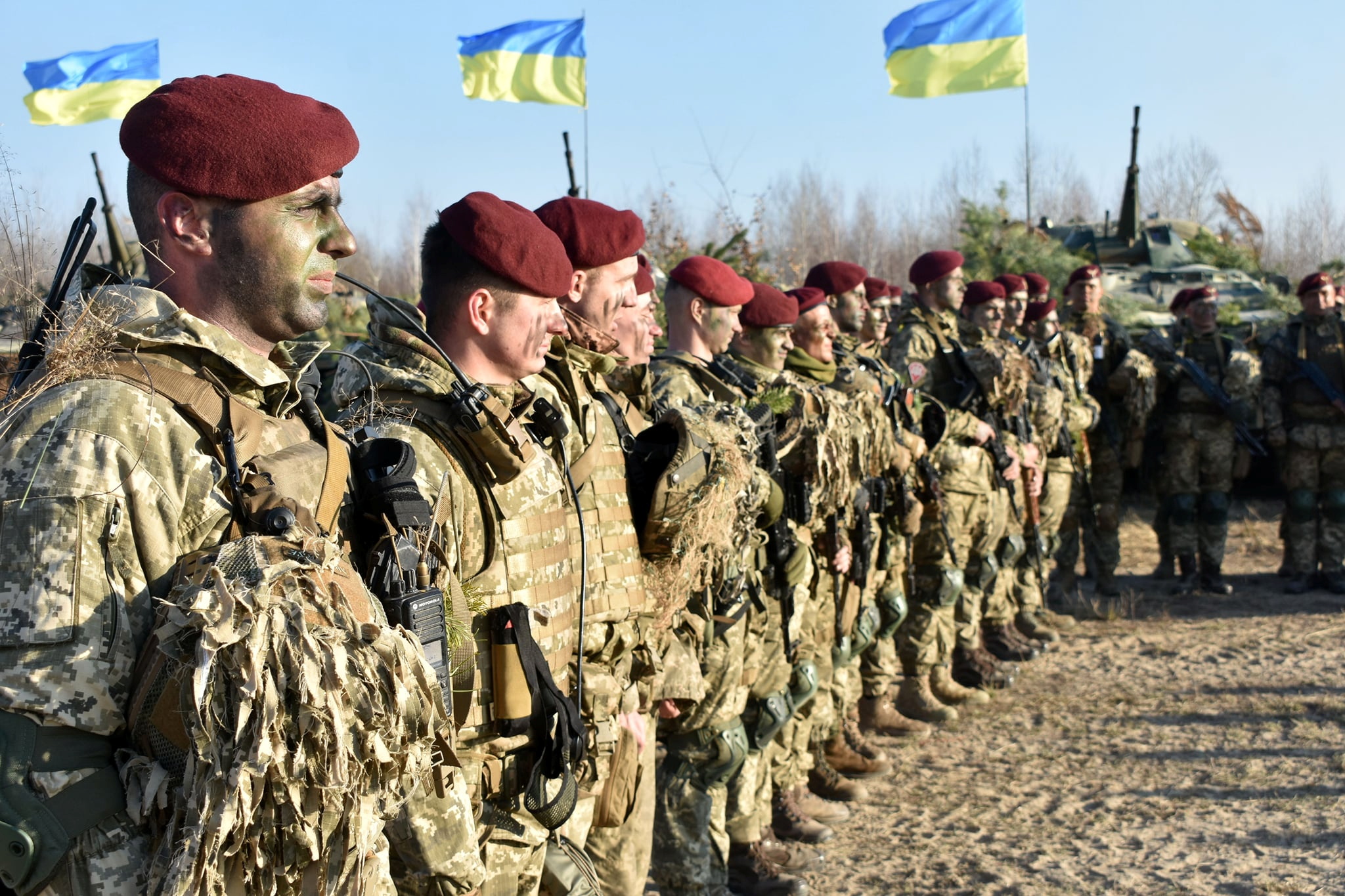 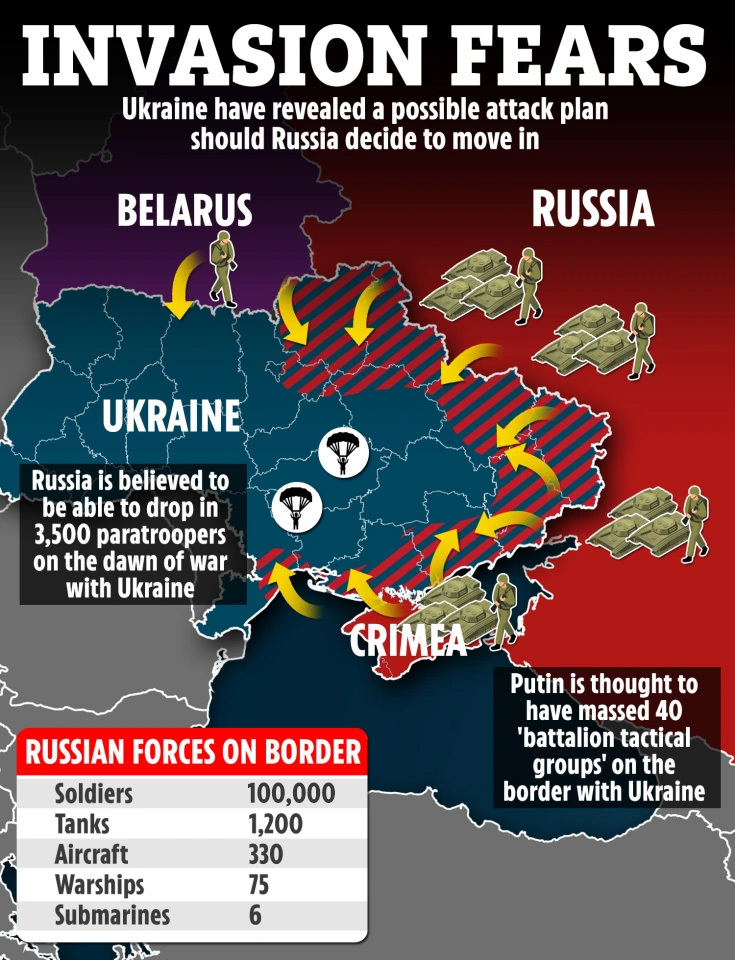 Tensions between Ukraine and Russia have been escalating over recent weeks, with Moscow having massed troops within striking distance of its neighbour’s borders.

Vladimir Putin has also ordered US officials to leave Russia immediately amid fears he plans to order an invasion of Ukraine, before the end of January.

Ukrainian President Volodymyr Zelensky said in parliament that Crimea — which Moscow seized in 2014 — was Ukrainian territory and Kiev's goal was to 'liberate' it, focusing on diplomatic solutions.

Speaking in parliament, Zelensky said that the return of Crimea should be the main goal and philosophy of Ukraine.

He said: "We see this as a direct threat to Russia.

"Such wording of course means that the Kiev regime intends to use all available means — including force — in order to encroach on a Russian region.

"This is how we are leaning towards perceiving it." 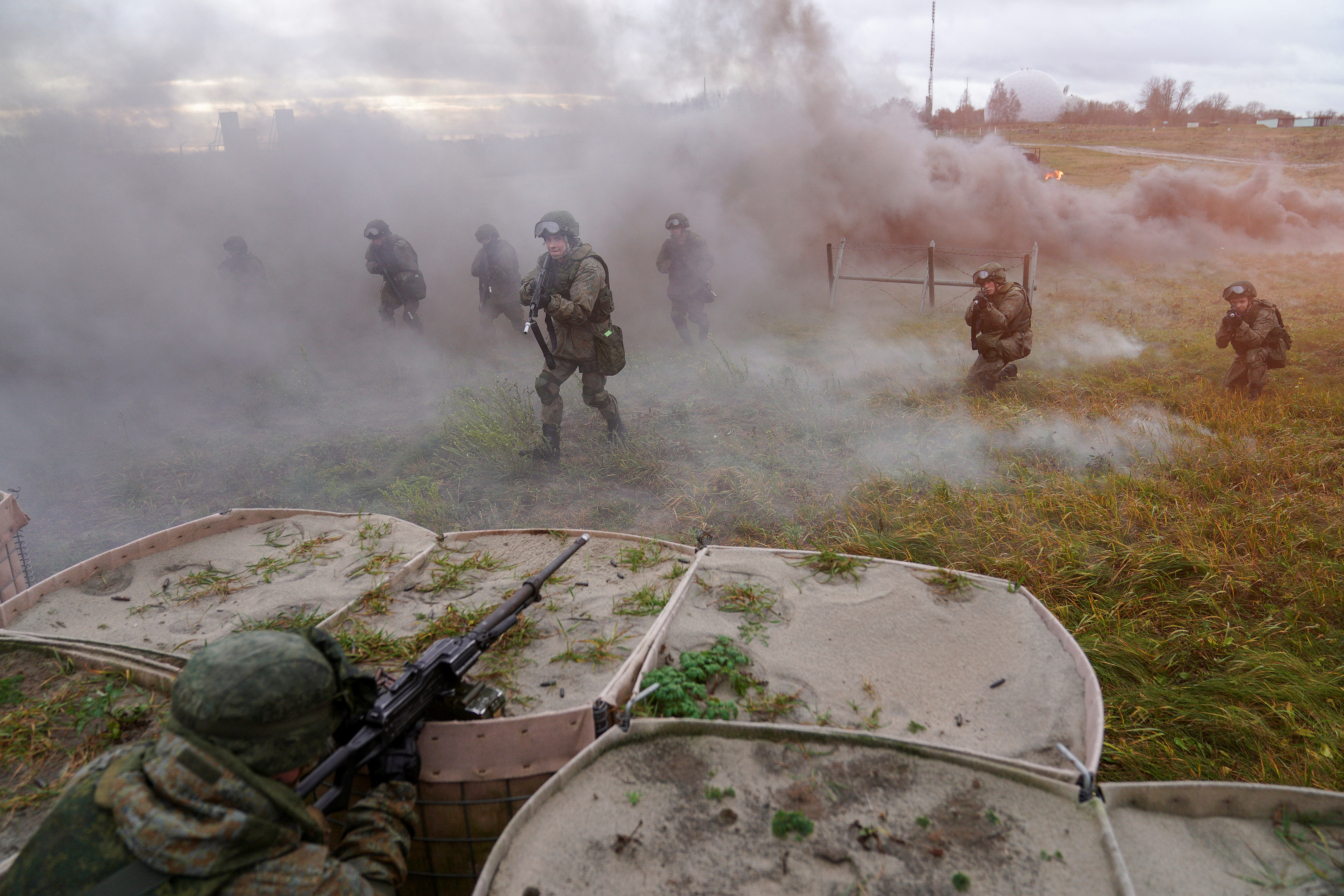 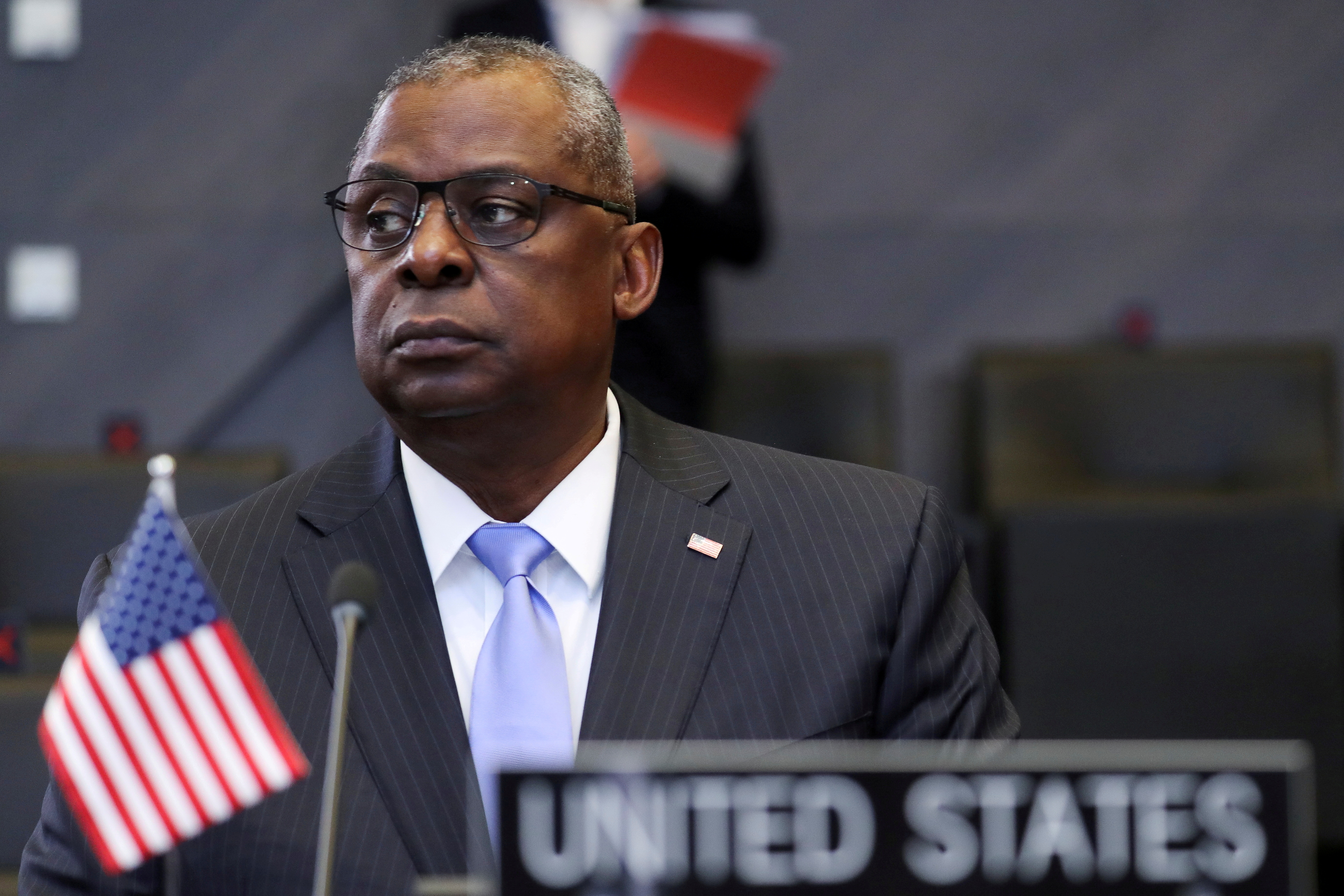 US intelligence reportedly supports the assessment that Russia is preparing for an invasion of Ukraine.

Russia is said to have deployed close to 100,000 troops, with tanks, artillery and ballistic missiles near the border, while Moscow insists it has no intention to invade.

They have also accused Ukraine and its Western allies of falsifying the claims to cover up their own aggressive intentions.

Peskov said: "The likelihood of hostilities in Ukraine is still high. This remains a matter of particular concern and worry for us.

"We are seeing an increase in the intensity of provocative actions on the contact line."

"I request that the necessary level of combat readiness, law and order and military discipline be maintained in the troops."

"NO CONCERN TO ANYONE"

US Defence Secretary Lloyd Austin today said that an invasion of Ukraine would be met with a response, while US secretary of state Anthony Blinken warned of 'high-impact sanctions'.

Austin said: "Whatever we do will be done as a part of an international community.

"The best-case though is that we won't see an incursion by the Soviet Union into the Ukraine."

Austin also declared any US response to Russia's actions towards Ukraine would be carried out in conjunction with the international community.

Blinken has warned Moscow to pull back its troops from the border, saying a Russian invasion would provoke sanctions hitting Moscow harder than ever.