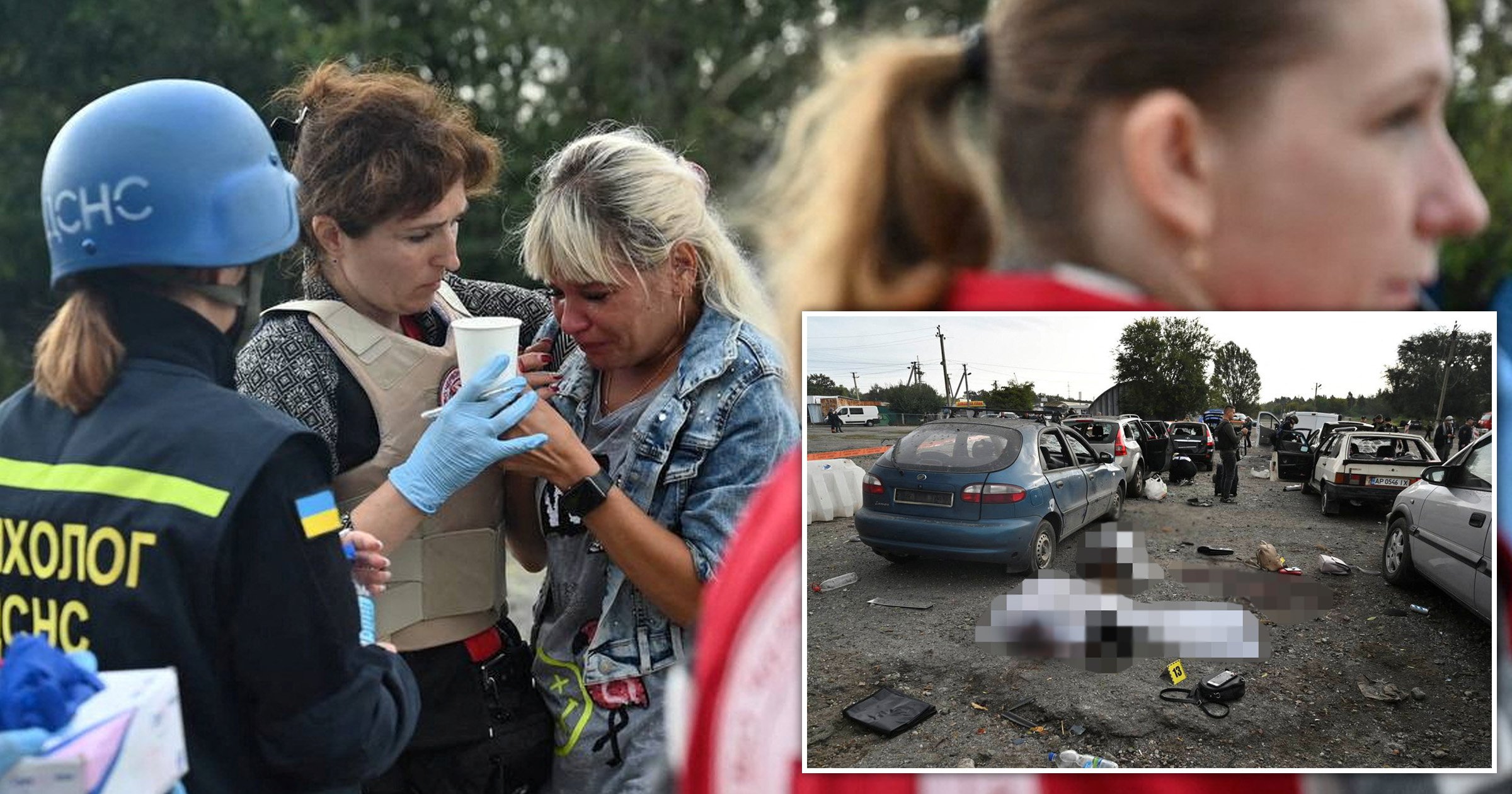 A missile strike has killed and injured dozens of civilians in a part of Ukraine set to be formally annexed by Russia today.

Vladimir Putin is poised to illegally declare Zaporizhzhia and three other regions are being formally absorbed into the Russian Federation.

But the fiction of his ‘liberation’ of Ukrainian territory has been laid bare by a brutal attack on civilians this morning.

Rockets hit a convoy which was assembling in a car park near Zaporizhzhia city – which is not under occupation – to carry people and supplies into Russian-held territory in the region.

At least 23 people were killed and 28 were wounded in the blast, according to regional governor Oleksandr Starukh.

A huge crater was seen next to a line of vehicles which were peppered with shrapnel holes.

Bodies were left strewn on the ground and sitting in the cars they’d been waiting in when the missile hit.

A Reuters witness saw the body of a civilian lying in the driver’s seat with his left hand still clutching the steering wheel.

The Russian president is set to proclaim Russian rule over four Ukrainian regions amounting to around 15% of its territory – Zaporizhzhia, Kherson, Donetsk and Luhansk.

Kremlin troops are in control of Donetsk but fighting continues in the other three, with a Ukrainian counteroffensive making ground overnight in Luhansk.

The Ukrainian army are on the verge of retaking the strategic city of Lyman, a move which would come as a huge symbolic blow to Mr Putin on the day he proclaims his meagre Pyhrric ‘victory’.

Stages and banners have been erected in Moscow’s Red Square for the announcement following the results of sham referendums held in the four areas.

The illegal votes, during which remaining residents who have not fled voted at gunpoint or in guarded rooms adorned with Russian flags, have been condemned by the international community.

The United Nations will meet later today to reiterate that it won’t recognise the Kremlin’s enforced borders.

Its chief, Antonio Guterres, said the annexations are a ‘dangerous escalation’ and a violation of the United Nations charter.

Ukrainian President Volodymyr Zelenskiy told his country on Thursday: ‘It can still be stopped.

‘But to stop it we have to stop that person in Russia who wants war more than life. Your lives, citizens of Russia.’

With the Kremlin still failing to force a decisive breakthrough militarily, reservists have been called up to make up for heavy losses in the army.

Tens of thousands of men have fled Russia for fear of being drafted and sent to fight in Ukraine.

The expected retaking of Lyman, the last major Russian stronghold in the north of Donetsk province, would pave the way for Ukraine to recapture swathes of land Russia is now claiming.

Kyiv has so far kept silent about the situation there, but Russian military bloggers have described its soldiers as all but surrounded, with advancing Ukrainians having cut off the last possible routes of escape.

Liz Truss has condemned the annexation attempts, saying: ‘Vladimir Putin has, once again, acted in violation of international law with clear disregard for the lives of the Ukrainian people he claims to represent.

‘The UK will never ignore the sovereign will of those people and we will never accept the regions of Donetsk, Luhansk, Kherson and Zaporizhzhia as anything other than Ukrainian territory.

‘Putin cannot be allowed to alter international borders using brute force. We will ensure he loses this illegal war.’